Regular readers know I enjoy rice dishes, like jambalaya, gumbo, paella, dirty rice, perloo and such and that was what I wanted to do with this. After looking through past notes and my recipe files, I decided on this recipe that isn’t one of the previously mentioned rice dishes, but relies heavily on rice. This dish uses spicy feral pork sausage, yellow rice, peppers, onions, corn and beans to create a mixture that appeals to the eye while filling the stomach. Since it really isn’t one of the previously mentioned dishes and has a rather robust flavor, I simply call it Tex-Mex Porker Rice.

March is a unique time for sportsmen in the Carolinas. Mother nature is yawning and stretching, but hasn’t fully risen from her winter slumber just yet. Fishing options include small streams near the Blue Ridge Mountain and peaks all the way to the cobalt blue water of the Gulf Stream above the Continental Shelf. Predator hunters can still have a go and extended snow goose season is in. This is the last month of the extended season for controlled hunting preserves. Turkey season will open in a few locations during the last week of the month. Feral pigs are legal game all year and smaller porkers make excellent table fare. This recipe uses a pound of feral pig sausage as its central ingredient.

1. Chop the onion, scallions, baby bell peppers and jalapeno peppers pretty finely. (If you are going to use cilantro, it cuts well with scissors.)

3. Heat the oil in a large skillet and brown the sausage.

4. When the sausage begins to brown, add the frozen corn, onions, bell peppers, scallions and jalapenos.

5. Stir in the taco seasoning, plus salt, red pepper flakes and black pepper (all to personal taste).

6. Cook at a low-medium heat until the vegetables are tender, but still crisp.

9. Stir often, being careful not to let anything stick, until the mixture is nice and warm throughout.

10. Serve while everything is warm.

11. Options are to garnish with cilantro and/or salsa and have extra Cha sauce, red pepper flakes and spices on the table for those with really robust palates.

This is Tex-Mex style cooking and should be flavorfully spicy without being overly hot. However, by adding another jalapeno, more red pepper flakes, pepper or Cha sauce, it can be kicked up a notch or three for folks who enjoy a bit more heat in their food.

Those folks who like to end a meal with dessert should find a slice of apple or peach pie or cobbler, with a scoop of vanilla ice cream, finishes this off just right. 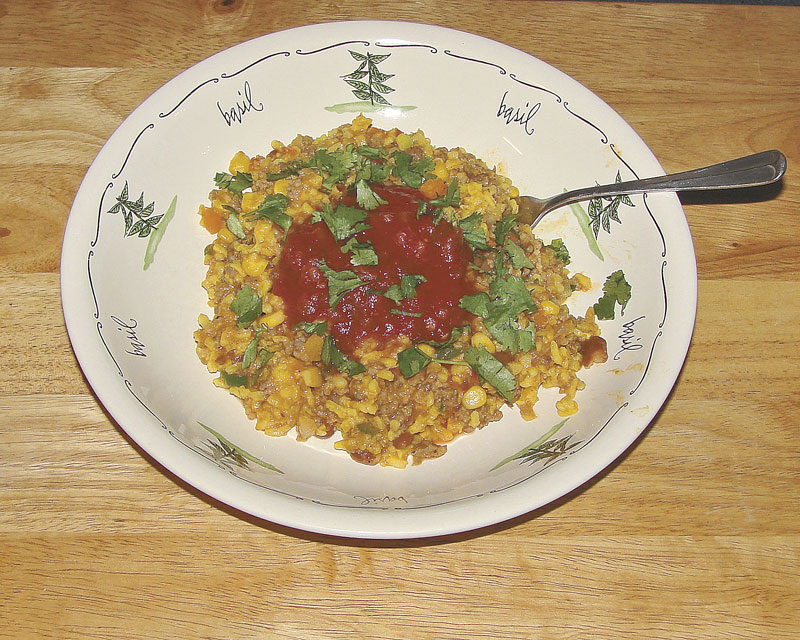 Feral pigs are a nuisance in many states and have been classified as vermin with wide open hunting seasons. They multiply as quickly as rabbits and are extremely destructive to their habitat. They can also destroy a field in a few nights. As bad as they are, they have some good points — primarily their mild flavored, lean meat.

I was introduced to feral pig hunting about 25 years ago and have enjoyed it since. They are smart animals and worthy adversaries. Most of them taste good too.

I always have some of my feral pig meat made into sausage. It is so lean we usually have to add some fat to keep it from scorching while cooking and still spray the pan with non-stick spray. This is the reason for the little bit of oil to begin cooking.

This cooks well in a large wok. I have a Fire Disc cooker, which I refer to as a cowboy wok and use outside over an open flame. I usually prepare this in it, but this batch was made during the late January ice storm and I cooked it inside in a large cast iron pot. This did well and is a good substitute for folks that don’t have a wok.

I don’t often recommend brands, but make an exception for the Texas Pete Cha Sauce. It is spicy without being ridiculously hot and has a nice sweet and smoky flavor.

The lime zest and juice definitely brighten the flavor a bit. Lime isn’t my favorite taste, but definitely works in this recipe. If you like the flavor of lime, add the zest from the complete lime.  There is a slight difference in taste.

I suggest cilantro as an option. It makes for an attractive presentation if you’re serving this at home for dinner. The dollop of chunky salsa is a good touch too and adds a little something, especially for those who prefer this in its milder form.

The other thing to remember is that this is a bit like elephant stew. It’s very hearty and thick and if you have more friends arrive than you were expecting, you can always add another couple of cups of rice to stretch it a bit. This was all my pot would hold and allow me to stir without spilling. Don’t bother to ask – it was all gone by the time everyone left.

Redfish are back in school

Air rifles are great for squirrel hunting for those who follow these tips. […]

Stripers are the hot species for Carolina kayak anglers during December. […]

About Jerry Dilsaver 1147 Articles
Jerry Dilsaver of Oak Island, N.C., a full-time freelance writer, is a columnist for Carolina Sportsman. He is a former SKA National Champion and USAA Angler of the Year.