In the Myrtle Beach area, Chilly Water Fishing Charter (843-450-1338) has been getting offshore some, catching some nice grouper, dolphins, and cobia, including one that was tagged last year out of Yorktown, VA.

When the offshore forecast has been rough, they’ve stayed inshore and caught some quality flounder.

Below Georgetown, Capt. Stephen Flook with Unashamed Adventures (864-430-8830) has the redfish and speckled trout dialed in. Using Z-Man soft plastics, his anglers have been catching both species in a variety of sizes. Flounder are showing up often enough to give some of his parties the inshore slam. The occasional shark has also given some of his anglers a thrill.

When fishing in the creeks, his anglers are catching slot-sized and over-the-slot redfish, some black drum and speckled trout.

Also fishing out of the Charleston area, Capt. Rob Bennett of Kiawah Fishing (843-367-3777) has put his anglers on numerous cobia this week. He said action at the Edisto 60 reef has been great. He said anglers shouldn’t worry if they don’t see any cobia near the surface.

“The majority of cobia are on the bottom right now,” Bennett said.

He’s also spent some time fishing in the creeks around Kiawah and had a lot of success with redfish ranging from over-the-slot to keeper fish. 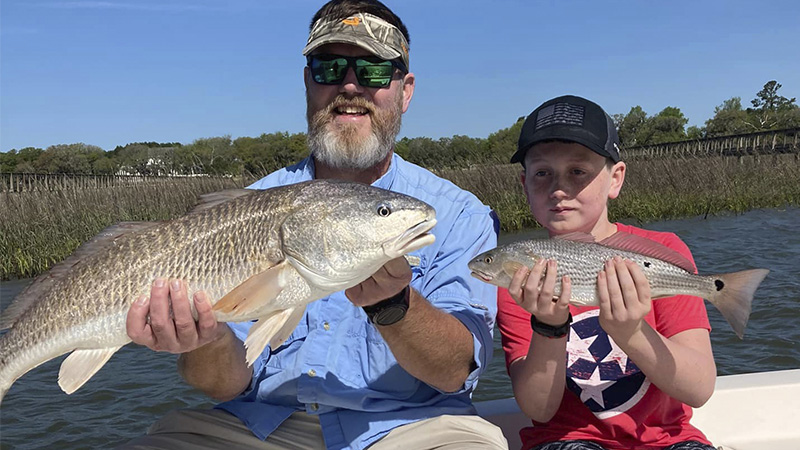 In the Hilton Head area, Palmetto Lagoon Charters (843-301-4634) has been on some hefty-sized trout along with big numbers of redfish. Topwater lures have provided for some fun action for both species, especially in grassy areas with clear water.

The bull redfish are thick around Hilton Head and Off the Hook Fishing Charters’ (843-298-4376) clients have been catching them in big numbers. Z-Man soft plastics fished on the Texas Eye jighead have produced a lot of trophy fish for anglers throughout the past few weeks.

Look for South Carolina’s coastal fishing to get better and better as the weather stabilizes heading into June.

Anglers seeking big grouper will find them in deep holes out of Holden Beach, N.C. […]