Fall fishing is excellent in the Carolinas, and one species many folks catch quite often is king mackerel. Unfortunately, there aren’t a lot of ways to cook kings. Two of the more popular are to grill steaks or fillets and to deep-fry breaded nuggets. I really like king mackerel and am always looking for different ways to cook it. This recipe sounds odd, but it’s really good.

King mackerel moved in along the beaches during October but were spread out a bit. As the water cools, they move to deeper water, begin to school and feed heavily. This is the time when finding a school typically results in filling limits quickly ­— and with mainly medium to large fish. I suggest releasing all the large kings that are in condition to survive, as these are almost all female and the most productive breeders in the fishery.

Unfortunately, not all big kings are in good shape after a long fight and wouldn’t survive, even if released. Then, there are others that, for a number of reasons, a fisherman wants to take home or hang on a set of scales. This recipe began as a different way to prepare kings, especially larger ones, and has become a favorite for us using the belly meat and rib bones. It tastes good using other parts, too.

Not everyone gets excited about eating king mackerel. Some folks like them as much as my family, others like them a little, still others say they eat it occasionally and some have no desire to ever have king mackerel on their dinner table. This recipe may change that. It really is surprisingly tasty.

This recipe tastes good and makes the meal fun. The ribs aren’t like beef or pork and could easily be removed, but since this is being barbecued, they’re left for visual effect. Some folks also think the meat immediately along the ribs is a little sweeter. Give it a try and see for yourself.

Folks with milder palates shouldn’t let the hot sauce scare you. At this small amount and mixed with the 7Up, you won’t taste it. Folks who like to kick the spice up a notch or three can add more hot sauce when served.

To ensure your meal is from the best fish possible, begin by putting them in the fish box and covering them with ice as soon as they hit the deck. Then, when cleaning them, take the time to remove all the red meat, skin and gristle so what remains is prime meat. This takes a few more minutes, but it’s time well spent.

Clean the fish so there is no red meat remaining except next to the skin, and leave the ribs. Wash the fish, pat the pieces dry and place them in a Ziploc bag. Fill the Ziploc bag to cover the fish with 7Up. Pour in the tablespoon of hot sauce and swish to mix it well. Be sure the mixture reaches all the fish. Work all the air out of the bag and seal it. Marinate this covered in ice or in the refrigerator for at least 30 minutes and up to several hours.

Brush the fish with the Carolina Treet that has run off and be sure there is still a little on the aluminum foil. Turn the heat to medium high for 4 to 6 minutes to finish cooking the fish. Be careful not to overcook the fish. Remove and serve hot.

Have some Carolina Treet, hot sauce, salt and pepper on the side for those wishing to add any of them.

This combines well with a variety of vegetables. Potatoes are a favorite side and they can be baked or fried. I served this meal most recently  with baked sweet potatoes, butter beans and hot, fresh bread. A fresh green salad or lettuce wedge is a great way to begin. 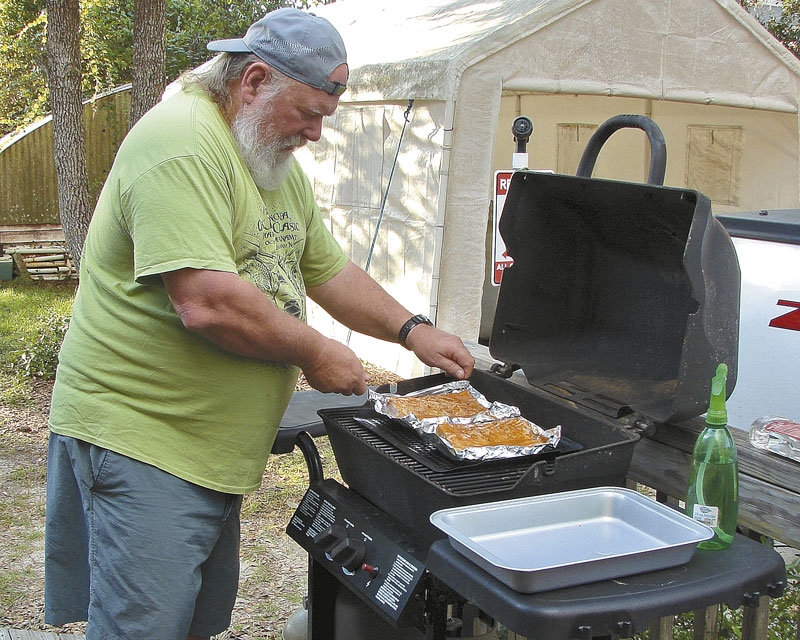 I understand that not everyone appreciates the taste of king mackerel. They have grayish meat and what some consider a strong taste. Some say it’s an acquired taste, and maybe it is, but I like it — and this preparation may help you realize you like it, too.

I grew up in a commercial fishing family, and we often ate what wouldn’t sell. The milder-flavored fish, like flounder, trout and drum, were usually sold, and we were left with fish that had more robust flavors. That wasn’t an issue with me though, as the real taste of these fish isn’t easily overpowered by the marinade, spices or breader used when cooking them. I had been enjoying eating king mackerel for many years when scientists determined their Omega 3 fatty acids are beneficial to our health.

The main part of this recipe was borrowed from my favorite way to prepare mullet. We have barbecued them in Carolina Treet Barbecue Sauce since I was a kid, and some years back, I tried it with king mackerel and liked it. If you can’t find Carolina Treet, a similar, vinegar-based barbecue sauce should work, but I wouldn’t try this with a sweet barbecue sauce. I believe your favorite pig pickin’ sauce mixture might also work well, but I haven’t tried it.

This recipe uses the meat from around the rib cage. It is good using other parts of the king, but we thought barbecuing was for ribs, so that’s where this started. The ribs are pronounced and clearly visible on a larger king, and there is a lot of meat around them. It isn’t quite a fillet, but it’s a nice piece of meat.

The 7Up and hot sauce serve as a tenderizer and enhance the flavor. I use a freshly opened 2-liter bottle, as it has the most carbonation, and this helps it penetrate the meat. The citrus juices in 7Up help break down the meat and mellow the flavor.

I don’t know exactly how the hot sauce reacts with the citrus juices and carbonation, but it does something. Even though you won’t taste any spice or heat at this amount, the flavor of the fish isn’t the same without it.

The kind of hot sauce is important. This works best with a Texas Pete, Louisiana or similar, vinegar-based hot sauce. Tabasco and the Mexican-style hot sauces work well on some things, but not this.

The cooking time varies significantly depending on the heat of the grill and the thickness of the meat. My grill is a little cooler than some, and the meat was thick, so it took longer to cook. I went about 14 to 16 minutes before rebasting and about 8 minutes after. The sauce gathering in the foil beside and under the fish kept it from overcooking. However, if you see the sauce crusting, check the fish immediately.

Remember, fish dishes are best with fresh fish you caught that day. This adds the experience to the flavor and makes it special.

NC’s Marine Fisheries Commission is expected to approve Amendment 3 of the Southern Flounder Management Plan on May 26, 2022. […]

About Jerry Dilsaver 1135 Articles
Jerry Dilsaver of Oak Island, N.C., a full-time freelance writer, is a columnist for Carolina Sportsman. He is a former SKA National Champion and USAA Angler of the Year.