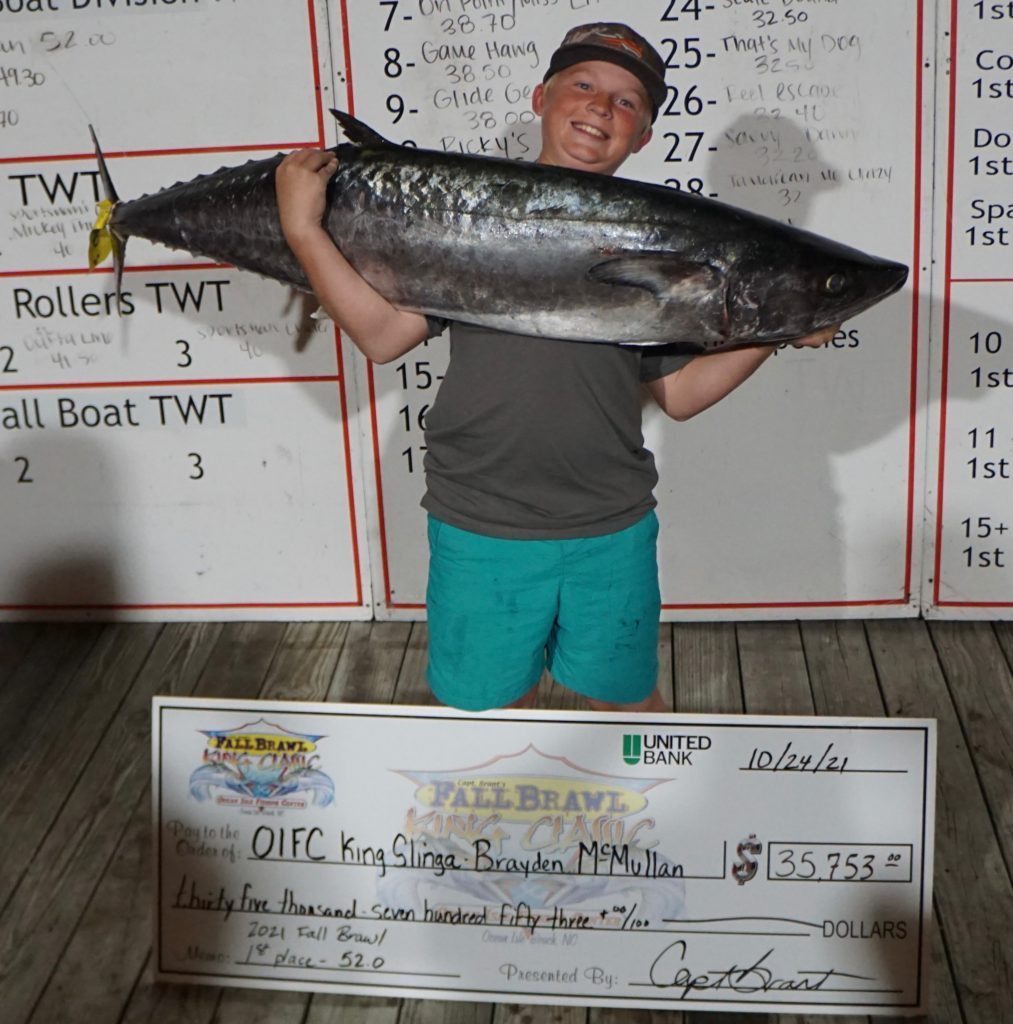 King mackerel tournaments at the Ocean Isle Fishing Center are a family affair. Rube, the patriarch of the McMullan family, always serves as the  weighmaster, while his sons Brant and Barrett, along with their wives Amy and Stephanie, all help organize and provide logistical support while also competing.

This past weekend at the Fall Brawl, the next generation of fishing talent showed up and made his presence known.

Brayden McMullan, who generally fishes with his parents, had been begging them for a month to allow him to enter his 18-foot Penncraft, the “King Slinga,” in this edition of the Fall Brawl, where the winning fish is generally caught right off the beach. His parents Amy and Brant discussed at length whether their 12-year-old son could do this.

Growing up on the water, Brayden can handle a small boat better than most adults. But being concerned parents, they couldn’t just turn a blind eye to the possible dangers. They finally made the decision that he could, so long as a responsible adult would be on board in case anything went wrong.

Brayden was confident that he could not only fish in the tournament, but also be competitive. After all, he and his dad had just weighed the fifth-place fish in the Rumble in the Jungle, just two weeks earlier. One of his dad’s friends agreed to go, and their plan was in place.

Unfortunately, his first plan did not come to fruition. The adult scheduled to be on board as a “supervisory mate” had to back out at the last minute. Brayden’s hopes were dashed, but only momentarily. Scott Schmitt was manning the Yamaha trailer at the event and agreed to step in. Only if something went wrong would Schmitt take control of the boat. Otherwise, everything was up to the youngster.

Out of 334 boats, the “King Slinga” was second to last to enter. Brant and Amy sponsored their son’s entry. He used his own money to enter a single calcutta of his choice — the Small Boat calcutta.

On tournament morning, Brant took his own boat offshore to survey the scene. Finding the ocean calm, Brayden had his final approval. With bait in the livewell, Brayden and Scott ran 2  miles off the beach and started trolling. Brayden made some moves over the next few hours and caught two small fish. At his last stop, right after putting baits out, he noticed his double pogy rig getting nervous. As the baits tried to swim past the boat, he caught the silhouette of a king mackerel for just a second.

Then it happened. The big mackerel turned through the spread and bit a bluefish, then peeled off. Brayden said the first run was almost 450 yards, exposing the spool bar on his Shimano Torium 30. Scott took the helm as Brayden battled the fish, which made a shorter run, then circled the boat. Once Brayden saw what he was dealing with, he called for the gaff. Scott grabbed it and sunk it home from the bow.

Knowing he had just caught a monster, Brayden called his dad. When Brant could finally make out what his excited son was saying, he realized what was going on. By then, the fish was on its way back to the dock and the scales, iced down in a kingfish bag.

The dock scene was pandemonium. The big fish weighed 52 pounds exactly. Brayden had a brief scare at Sunday’s weigh-in when a 49+ pounder hit the dock. But his lead held up, making him the Fall Brawl champion. His fish was not only this year’s biggest, but also the second-biggest in the tournament’s 20-year history.

The young angler won the trophy, a check for $35,753 (which he says he plans to save “at least half of), and also won a side bet with his buddies who had to wash his boat for him. Welcome to tournament fishing Brayden!

Winter is a great time for catching a mixed bag of inshore fish along the Lower Cape Fear River. […]