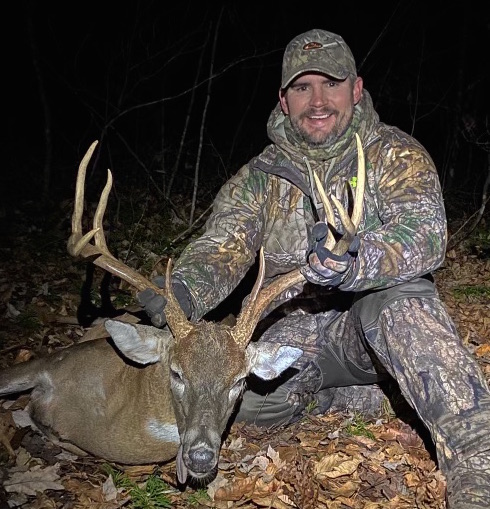 The 8-point buck was a frequent game cam visitor

Trent Eskew of Travelers Rest, S.C. killed a public land giant buck Nov. 26 in Greenville County. The 8-point buck weighed 192 pounds and has been green-scored at 130 4/8 inches. It was one of the deer Eskew was targeting this season.

Eskew hunts different parcels of public land in the upstate. He starts using trail cameras and boot leather in the summer, scouting to find the bucks. Once he has located a decent deer, he focuses hard on that area. He also hunts in and around the region’s more populated areas. But when he heads to the mountains, everything changes.

“The public land mountain bucks are different. And that’s one of the reasons I enjoy hunting them,” he said.

Before the 2021 season opened, Eskew already had numerous photos of this deer.

“I found a trail that was beat down and put a camera on the trail. And I started getting some pictures of him,” he said.

Once the season opened, he began trying to get some sort of pattern on the buck. The public land giant would show up every couple of weeks on one of Eskew’s many game cameras. All but one of the pictures was at night.

That photo gave him hope.

A week before he killed the buck, Eskew had an unfortunate encounter with the animal. Arriving late due to work obligations, Eskew was hunting when the wind shifted unfavorably on him.

“The wind changed so I got up to move toward a new spot. After I moved only a few steps, I spooked him. I thought that was it,” he said.

He shot the public land giant from 60 feet up

After the deer blew out, Eskew waited a few minutes, then investigated the area. He found a giant scrape and decided he needed to hunt near it. The only option for his stand was 25 yards away from the scrape — and 60 feet above it. He said in these mountains, you are often forced to position yourself high above the area you’re hunting.

He hung his stand and stayed out of the area for more than a week, finally returning on Nov. 26 around 2 p.m. A brisk 15 to 25 mph wind was howling. Eskew said the wind was so cold he found it difficult to sit still and hunt the spot correctly.

“I was freezing and ready to get down and find somewhere warm,” he said.

Eskew started getting his stuff together to climb down. But he heard something that stopped him in the process.

“I was checking my lifeline connection and ready to step onto the ladder when I heard footsteps behind me coming in fast,” he said. “I turned and saw him standing there at 25 yards right on the scrape.

“The tether of my safety harness was choking me since I was already in the process of getting down when I heard him. But I was able to get the scope on him. As soon as the scope rested on his chest, I shot.”

The buck launched into some thick bushes where Eskew heard him crash. A few minutes later, the buck stumbled out. Eskew anchored him with a final shot.

With a lot of great bucks to his credit, Eskew admits that getting a public land buck of this quality ranks high on his accomplishments as a hunter.

Hector Elizondo was fishing with his dad at a farm pond in Joanna, S.C. when they caught this nice stringer of fish. […]

About Pete Rogers 150 Articles
Pete Rogers of Taylors, S.C., is employed with the USDA Wildlife Services and has been a sporting writer and photographer for over a decade. He has a real passion for trapping and enjoys sharing his outdoors experiences with his wife and five children.