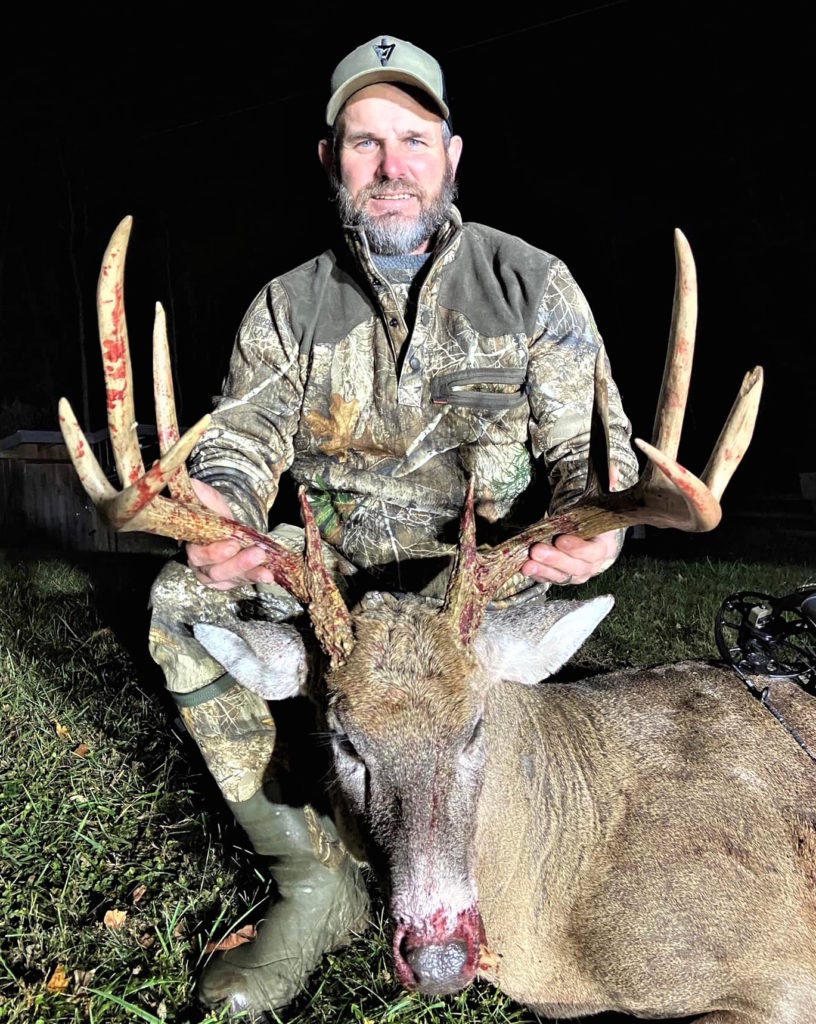 David Thomas of Yancey County played “Here we go ‘round the blueberry patch” with a doe and bagged a 211-pound buck in the process on Nov. 16, 2021.

The whitetail sported a massive 5×5 rack which has been green-scored at 159 6/8 typical inches. The deer had been chased out of a mountainside blueberry patch 3/4 of a mile above Thomas’ house.

“I got lucky,” Thomas said. “I knew some guys on the other side of the mountain had been hunting a big deer.

“(My trail camera) got one picture of (the buck) the night before. My neighbor had seen the buck behind my house at the blueberry patch at 2 p.m. the previous day and texted me a picture of the buck with the doe in that patch,” he said. “Then my dog chased the buck and doe out of the patch.”

Seeing evidence of a large-racked mountain buck at the same place is fairly unusual. So Thomas quickly got the hint that something was telling him to pursue the monster deer.

The next day, Thomas hoped to get a bow shot at the deer before one of his neighbors planted it.

“When my dog chased the buck out of the blueberry patch, I figured he’d gone across the mountain and would be over there,” he said. “But with a doe, he was likely to be anywhere. And that’s what happened.

“She led him right in front of me.”

Thomas arrived at a 21-foot tall ladder stand that morning. He sat all day before the doe and buck appeared at 4:30 p.m.

The doe walked behind his perch that overlooks the blueberry bushes with the buck in tow.

“I first saw him in a briar thicket. Then he was trotting behind her,” Thomas said. “I didn’t expect him at all. I was just planning to enjoy the day, looking at the scenery.”

The doe spotted him and started trotting back down the hill. But he was close enough at 30 yards to try a shot with his Mathews VXR bow set at 75 pounds draw weight. He had Carbon Express arrows tipped with Rage 100-grain Hypodermic Trypan broadheads.

“My arrow passed through him and went through his off leg,” he said. “He ran 55 or 60 yards then I watched him fall.”

The ladder stand has been at the same spot for several years, an almost vertical area of woods.

“It’s steeper than a mule’s face up there,” Thomas said. “There are a lot of beech thickets, oaks and crab apple trees.”

“Both deer, which have almost identical racks, were standing within 20 yards of each other when I shot them,” he said. “This deer was 6-years-old and last year’s was 4 1/2.”

Jimmy Beasley was hunting in Stokes County, N.C. on Dec. 23 when he killed a big 13-point buck that he had nicknamed Old Stewart. […]

Targeting rocks is the key to catching Fontana smallmouth in February. […]