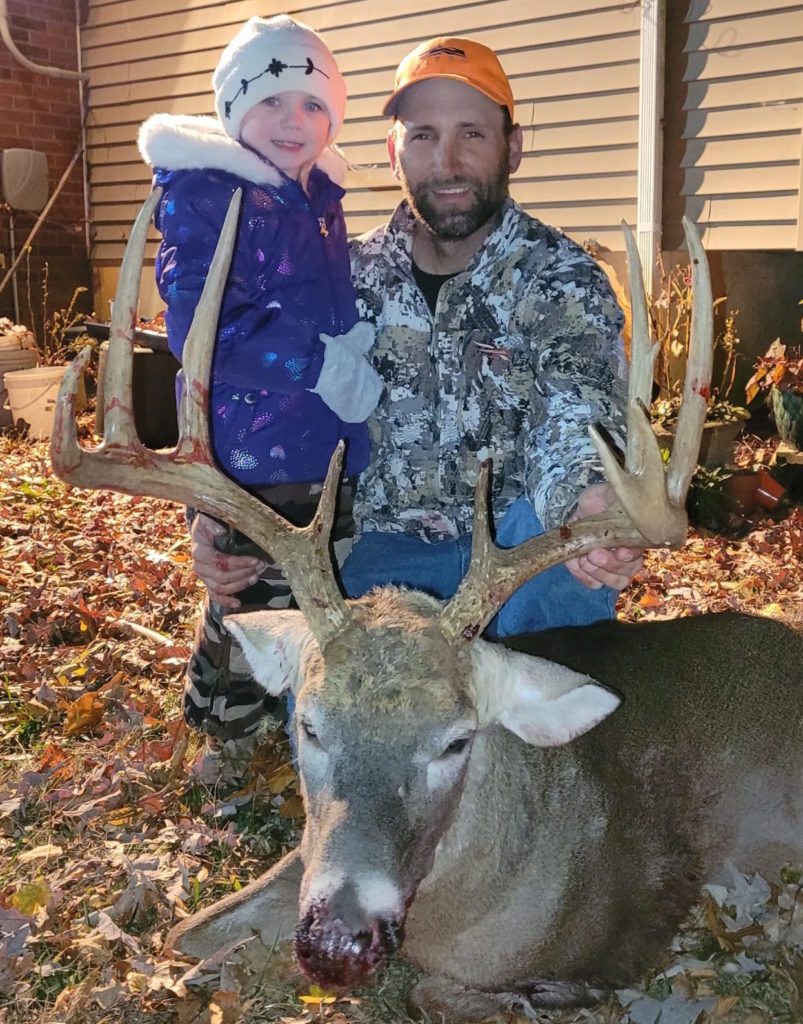 My name is Matthew King and I was lucky enough to harvest this great buck on opening day of rifle season in Surry County (Nov. 20th). I had been getting trail camera photos of him for over a month. I had spent every possible opportunity in the stand waiting and watching up until Nov. 9 but had no encounters with buck. On the 10th I left for Colorado to go on an elk hunt with some friends. I was excited for the trip but a little sick to my stomach knowing I was leaving such a great buck during muzzeloader season. For me at least, those 2 weeks over the past several years have seemed to be the best time to cross paths with mature bucks in the daytime.

After a successful elk hunt and taking a great 6×6 bull I couldn’t stop wondering if this buck would still be around when I got back.  Our return flight arrived in Greensboro at around 12:30am on November 20th.  By the time I got home and got things settled it was around 2:00am. My wife knew I was itching to get back in the stand and asked me if I was really going to hunt Saturday morning, she already knew the answer.

After a couple hours of not so restful sleep I rolled out of bed at 4:15 a.m., got my stuff together and headed for the property I hunt in Surry County. It’s a little over an hour drive. The morning proved to be eventful with lots of deer activity and I even saw 2 nice bucks but not the one I was looking for. I got down around 11:00am. Pulled the card from my trail camera. The last pictures I had of the buck were on the morning November 16th at around 7 a.m. I feared the worst but climbed back in the stand anyway.

The evening was much slower than the morning but I did start to see deer again around 4:15pm.  Nothing too exciting but I do enjoy just watching them.  At around 5:00pm I heard the unmistakable sound of a buck running a doe behind me.  They were still a hundred yards or so away and I couldn’t see them but I knew they would most likely continue my way so I got ready just in case.  The next time they moved the doe ran passed me and stopped at about 40 yards and looked back.  I knew a buck was coming.  As he came into view, walking down an old logging road, I quickly recognized that he was the one I was waiting for.  He paused in a opening at about 30 yards and I took the shot.  I listened as he went out of sight and then heard the welcome soud of a crash followed by silence.  He had only ran about 60yds.  The tracking job was fairly easy and I was elated when I put my hands on those horns.  No “ground shrinkage” here.  If anything he was bigger than I expected.  I felt truly blessed to have taken this fine buck.