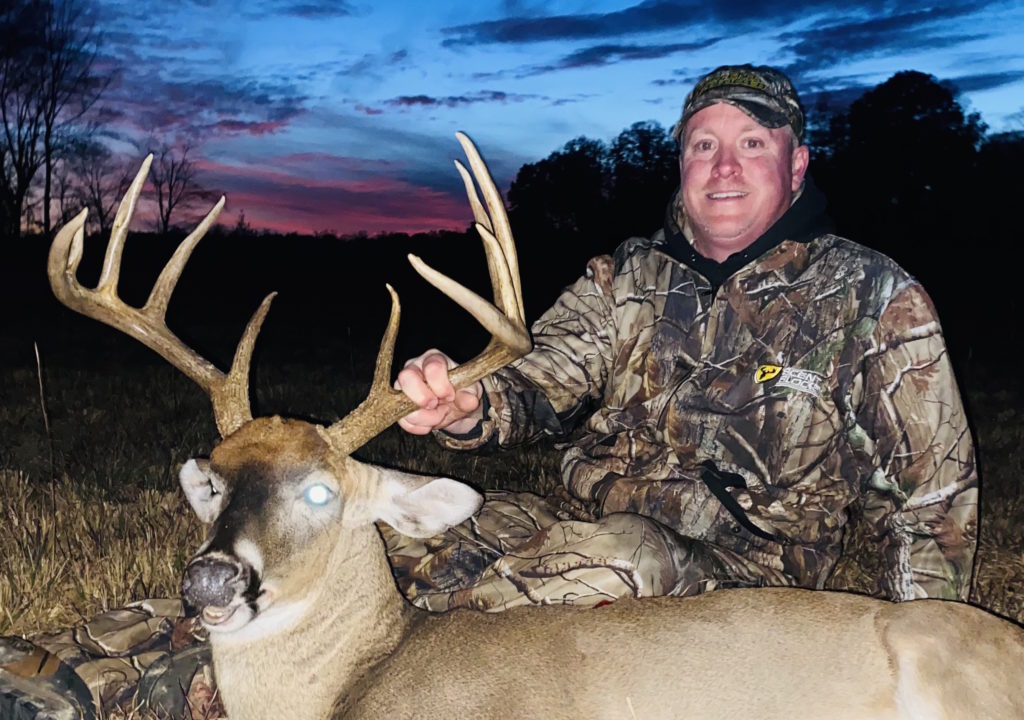 Scott Taylor of Stokesdale, N.C. smoked a Rockingham County trophy 10-point buck on Nov. 20, 2021. He shot the buck with his .50-caliber Thompson Center muzzleloader. But it wasn’t his first encounter with this brute, nor was it the first time he had drawn blood from it.

Taylor arrowed the buck 2 months earlier from 10 yards away. But despite a good blood trail and a tracking dog, he failed to recover the deer. And the drama didn’t stop there. A month later, when Taylor finally got him in his sights again during muzzleloader season, his firing cap misfired — not once, but twice.

He first picked up this buck on trail camera in mid-September.

“He was new to the farm in Rockingham County,” Taylor said. “He was showing up late on camera. So I decided to cut him off.”

Moving his stand made a difference for the hunter. On Sept. 24, the deer walked up 10 yards from Taylor’s stand. Taylor shot an arrow right in the engine room. Or so he thought. The deer ran off and Taylor immediately found a good blood trail. He just knew the deer would be a few more feet down the trail. But after an extensive search effort by Taylor, the deer just kept on going.

“I found several areas where he had laid down. And I couldn’t find him even after using a tracking dog. I was disgusted to say the least,” he said.

He later found out his arrow had only penetrated one lung on his failed archery attempt. It wasn’t enough to fatally wound the deer.

The Rockingham County trophy continues to be elusive

Taylor felt crushed, but hoped the deer would show back up at some point. And sure enough, two weeks later, the buck appeared on camera again. And it continued to show up every 7 to 10 days. With muzzleloader season approaching, Taylor felt good about his chances to take the deer.

Over the next few weeks, he had several close encounters but just couldn’t get a clean shot. It was frustrating, but he wasn’t about to give up.

On Nov. 20, he got a trail cam photo at 1:15 p.m. So Taylor set up that afternoon. And after hearing from a fellow hunter that a lot of chasing was going on, he decided to move his stand deeper into the buck’s territory.

“And a few minutes later a doe came out with a buck chasing her,” he said.

Taylor got excited, but then realized it wasn’t the buck he was after. He settled in and waited. At about 5:15, his target buck finally showed. It stepped out at 150 yards, and Taylor had just enough time to aim and squeeze the trigger. His rifle misfired.

Luckily, he was able to get set again and took another shot. Again, his muzzleloader misfired.

“I am really starting to panic at this point and thinking it just isn’t meant to be,” he said. “I attempted a third shot. He was over 200 yards away now, but the final shot was perfect and he dropped in his tracks.”

According to Taylor’s processor, the single-lung shot during archery season forced the Rockingham County trophy to lay up to live off his fat for a long time. The deer had zero fat with a very thin cape.

“After all of this, I feel very blessed to take this beautiful buck,” he said.

Javan Wilkinson of Dallas, N.C. killed a Gaston County 9-pointer on Dec. 12. The buck had a a massive drop-tine on one side of its rack.  […]

About Jeff Burleson 1272 Articles
Jeff Burleson is a native of Lumberton, N.C., who lives in Myrtle Beach, S.C. He graduated from N.C. State University with a degree in fisheries and wildlife sciences and is a certified biologist and professional forester for Southern Palmetto Environmental Consulting.