As the end of another deer season approaches, diehard outdoorsmen in the Carolinas can continue their woods play, changing to a much smaller target with its own set of hairy challenges.

Squirrels are one of the most-rambunctious game animals available for Carolina hunters, who can expect to see a drastic increase in squirrel activity over the next few months as the beginning of squirrels’ mating season brings on some of  the best hunting of the year.

Years ago, before hunters dreamed of a trophy buck downrange of a razor-tipped arrow or large-caliber rifle bullet, neophyte hunters cut their teeth wandering through the forest after bushytails jumping from limb to limb. One of America’s most-favorite small-game species, surveys indicate that squirrels are the second most-popular game species in the state behind deer hunting.

Of the three squirrel species that live in the Carolinas — the fox, red and gray — the gray is the most abundant. From the steep mountains to impenatrable pocosins along the coast, squirrel populations are booming for bushytail buffs, with plenty of opportunities to take down the daily bag limit of 10, driven by the animals’ reproductive urges.

Squirrels breed in summer and winter

Colleen Olfenbuttel, a wildlife biologist, said squirrels generally will mate twice per year in the Carolinas.

“It is documented that squirrels will have young throughout the year. They will breed shortly after their young leave the mother. And in the Carolinas, squirrels will breed in June and July and then again in December and January, she said.

Squirrels take their mating serious. Similar to rutting bucks, squirrels become sex-crazed maniacs with little respect to dangerous situations, becoming vulnerable to predation, hunting mortality and sometimes becoming a danger to each other. 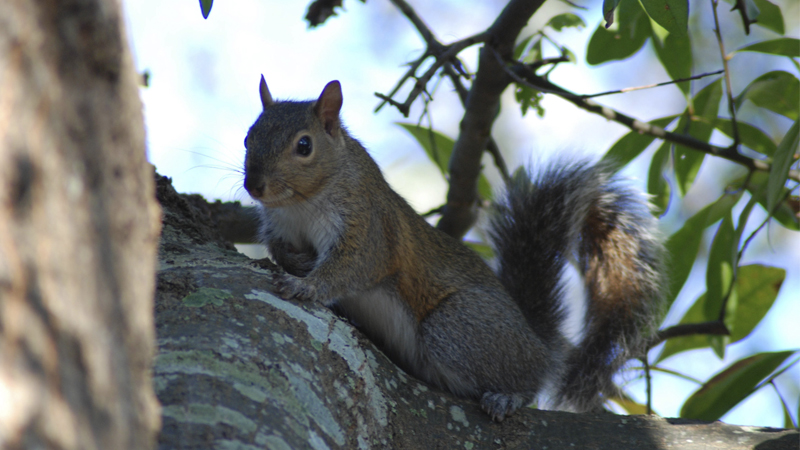 “Squirrels are promiscuous breeders and will get pretty serious with each other,” Olfenbuttel said. “Males become territorial and will fight with other males for mates. Males will try to mate with as many females as possible.”

Fortunately for hunters, the first mating season occurs at the tail end of deer season and in winter when limited food supplies concentrate squirrels. Typically, squirrels are opportunistic and will eat a wide variety of foods.

Rowell Burleson has chased squirrels  for more than 60 years in the bottoms along the Pee Dee River. While he deer hunts through that season’s final day, his squirrel hunting begins on Jan. 2. His best success is usually around corn piles left over from deer season.

“Corn piles will draw them in like a magnet on just about any property, and it can make for a fun hunt with a .22 caliber rifle,” said Burleson, who will also venture to other areas when his corn piles disappear.

“Anywhere there is a good food supply, matched with water and significant cover, will have plenty of squirrels,” he said. “Squirrels den mostly in hardwood trees along the water, and there is usually an abundance of acorn-producing oaks in these areas that provide them with a stable food supply.”

Even when hunters find a place that has obvious signs of recent squirrel activity, there may be little movement in the limbs above or any rustling in the leaves. The typical weather on a cold, wintry December or January day can have a negative effect on squirrel activity, making for a difficult start if a pot of squirrels and rice is anticipated for Sunday dinner.

“Squirrels will seek shelter, hunker down, and limit their activities to stay warm when it gets real cold near freezing or below,” Olfenbuttel said, explaining that a warming trend can have the opposite effect. “When it warms up for a few days, they will come out and become very active.”

Burleson also experiences a change in squirrel activity during changes in weather patterns on a weekly and even a daily basis.

“When we go squirrel hunting, a pre-dawn start is rarely part of the equation. They will not start moving good until the sun comes out later in the morning,” he said. “The late afternoons, just before dark, are also prime times to see a lot of squirrels moving.”

Squirrel hunters typically take one of two options: still-hunting around areas with sign or staying on the move, covering a lot of ground. Both methods can produce a mess of bushytails during periods of peak activity. But hunters with the ability to slip quietly through the woods can come in contact with more squirrels in a shorter period of time.

On active days during the mating period, squirrels exhibit overzealous behavior with their guards down. Hunters can hear the familiar sounds of leaves crunching and squirrels scampering around at great distances.

Hunting squirrels with feists is another option

Burleson, who normally still-hunts, will occasionally return to his roots and using miniature canines to get squirrels in range.

“The small dogs were a perfect companion and an excellent aid to find squirrels,” he said. “They will prance down through the woods and look up into the trees.” 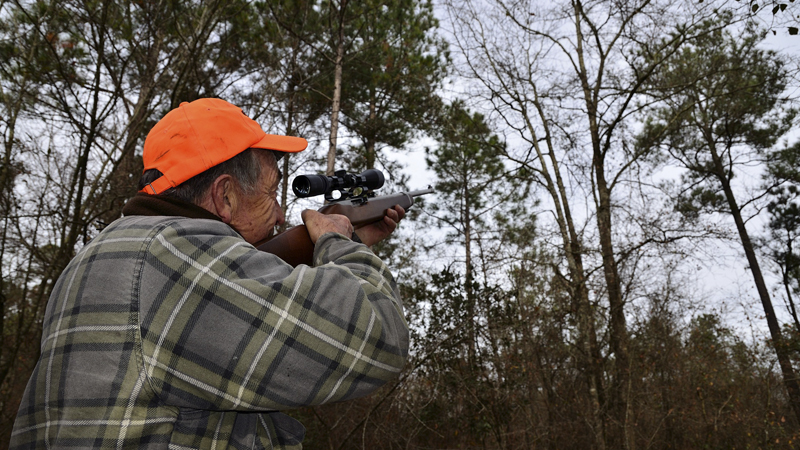 The small stature and unthreatening nature of these small canine breeds are ideal for hunting squirrels. According to Burleson, squirrels will rarely spook  — “den” as he calls it —when these small dogs scamper through the woods and bark at the base of their tree.

“They don’t scare the squirrels much and can make it a lot easier to get a shot before they retreat to their dens,” said Burleson, who prefers a shotgun with either Nos. 4 or 5 high-brass loads with hunting with dogs.

Shotguns are effective, but .22 rifles are often better options

“The dogs don’t scare them. But the squirrels usually head straight to their den without stopping when you walk up to their tree. And a shotgun is a very effective at bringing them down,” he said.

When still-hunting or hunting in a more passive manner, Burleson prefers a .22 loaded with hollow-point cartridges.

“A shot to the head with a hollow point will ensure a quick death and an entire body of unscathed meat,” he said. “If shot in the body, it may bring them down, but it will destroy the meat. As much as I like to eat squirrel, the last thing I want to do is tear up half the animal.”

Even though deer, turkey and waterfowl hunting makes the front page in most hunting publications, squirrel hunting can be one of the most exciting and rewarding experiences available. Luckily for Carolina sportsman, squirrels are abundant in every county. With squirrel season lasting through the end of February, hunters have a world of opportunities to bag a limit of bushytails.

Rabbit hunting in the Carolinas

Rabbit hunting is a great way to spend a winter day afield. Adding dogs to the mix makes it much more effective. […]

The crappie are biting consistently, especially around deep brush piles throughout the Carolinas, despite the nasty weather this February has brought us. […]

On this week’s episode of the PG and Boatgirl Outdoor Podcast, Gene Wisnewski talks about hunting for coyotes and hogs after the sun goes down. […]

About Jeff Burleson 1240 Articles
Jeff Burleson is a native of Lumberton, N.C., who lives in Myrtle Beach, S.C. He graduated from N.C. State University with a degree in fisheries and wildlife sciences and is a certified biologist and professional forester for Southern Palmetto Environmental Consulting.