Don’t like king mackerel? Try them in this tasty treat

Not everyone appreciates the taste of king mackerel. But I can’t remember ever meeting anyone who didn’t enjoy catching them. Plus, they are one of the few fish that you have a good chance of catching in August’s heat. And they’re usually feeding just a short run off the beach. Making mackerel fajitas is a fun way to eat them that may get more folks to try them.

As hot as it is, August is when fall begins to occasionally flex its muscles. And occasional cooler mornings and evenings appear. These same days are great times to fire up the grill and have a fun meal on the deck or patio with lots of friends and/or family. Grilled king mackerel fajitas are tasty, good for you and fun to make. It’s also nice that during August, king mackerel often bite as close in as the end of piers. And they are almost always within 10 miles or so of the beach.

Not as spicy as it sounds

If you like fish but think king mackerel have a strong flavor, this is a great way to try them. Trim all the red from the fillets before slicing them, and all that remains is pretty meat. Cook it until it begins to flake but be sure not to overcook it. The ingredients for the marinade make it seem like it will be spicy, but it’s not. It really is a great recipe to prepare a fun and tasty meal from a fish that often gets maligned. Mackerel has the B-complex vitamins that help lower blood pressure and cholesterol. So it’s good for you too.

Give grilled king mackerel fajitas a try. The idea is unusual and the flavor is unusually good. I’m sure you’ll be surprised how much you like it. 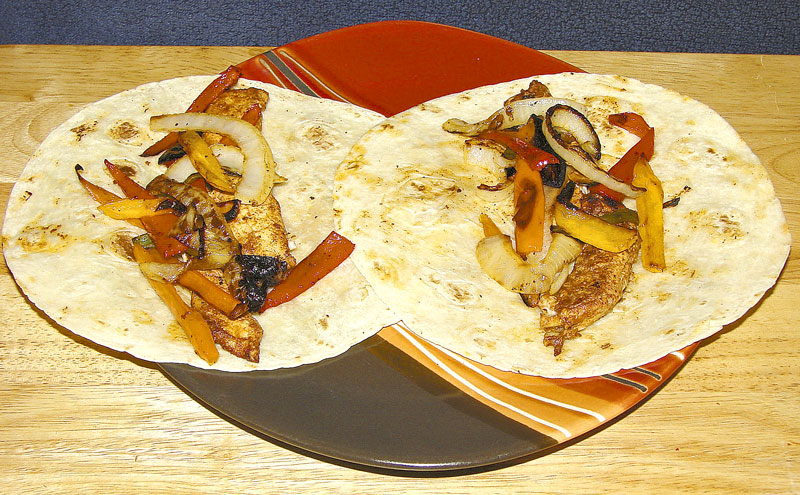 Cut the fillets into approximately finger-size strips. Put the king mackerel strips in a Ziploc bag. Add the marinade, squish it around a little, and squeeze all the air out. Let it marinate in the fridge for 30 minutes to 2 hours.

Slice the onions and bell peppers into strips approximately 3/8- to 1/2-inch wide. Slice the jalapenos into strips approximately 1/4-inch wide. Combine the onions and peppers and drizzle a little olive oil on them. Sprinkle the peppers and onions with Cavender’s All Purpose Greek Seasoning (to taste) and put them in a Ziploc bag in the refrigerator until ready to cook. Spray a grill vegetable tray liberally with non-stick cooking spray and place on the grill.

Careful not to overcook!

Preheat grill to high. Pour the peppers and onions onto the grill tray and cook until they begin to wilt, stirring often and being careful not to scorch them. Remove the peppers and onions to a bowl. Spray non-stick cooking spray on the vegetable tray again. Place the fish strips on the grill and cook 2 to 4 minutes on each size, depending on heat of grill. Remove as soon as the meat flakes and be careful not to overcook.

Warm tortillas on the grill. Combine fish, peppers and onions on tortilla shells and serve immediately.

Feel free to add any sauces, squeeze of lime, or salsa that you like. I believe the lime is strong enough as it was marinated and usually add a squeeze of Texas Pete Cha Sauce or Scotch Bonnet Pepper Sauce to my fajitas. Others will have their favorite sauces.

I really like salads and would have a lettuce wedge or green salad to begin the meal. This is a fresh and light meal. So chunks of cooled watermelon or fruit salad make a nice dessert. If you’ve got to have something sweeter, try a slice of Key Lime pie.

I know this sounds unusual and isn’t a way you’d think of to prepare king mackerel. Don’t let that stand in your way, or you’ll be missing out. This is a combination of king mackerel, peppers, onions and of spices that make it taste just right. It’s even better when prepared outside on one of the August nights when the heat of summer breaks.

Start by trimming all the red meat off the fillets; it is simple and only takes a few minutes. The strips should be roughly the diameter of a man’s index finger — thick enough not to overcook easily, and it also seems to absorb just about the right amount of marinade to have the taste, but not be overpowering.

Mix it up a little to suit your taste buds

The marinade ingredients and amounts listed make a good combination that adds some flavor without being too strong or spicy. I don’t mind experimentation with my recipes and actually encourage varying the amounts to lean to your personal tastes. Add more chili powder or cayenne pepper to make it spicier and reduce them to make the flavor more subdued. More or less soy sauce and just about every other ingredient changes the taste a little.

Be careful with the lime. This calls for a third of a cup of fresh lime juice, and it can get a little strong if the fish marinates too long. A half-hour is a good minimum to absorb some lime taste, and two hours lets it absorb a lot of lime flavor.

The vegetables contribute a lot. I like to use mini sweet peppers; they are milder and more tender, and I believe taste a little sweeter. Jalapenos are a personal preference. I would suggest at least using one to get the flavor, and if you like them, use two or maybe even three.

I used medium-size tortillas for this meal. When fixing for more people or people who haven’t tried this before, I would suggest using small tortillas. They are large enough to give folks a good taste and easier to handle.

This is a fun meal that is easy to prepare and tastes very good. It lends itself to preparing outside on a grill, so having a vegetable tray to prevent small pieces from falling through the grate is a must. If you like fish, I’m pretty sure you’ll enjoy it.

Sign Up Now
About Jerry Dilsaver 1189 Articles
Jerry Dilsaver of Oak Island, N.C., a full-time freelance writer, is a columnist for Carolina Sportsman. He is a former SKA National Champion and USAA Angler of the Year.