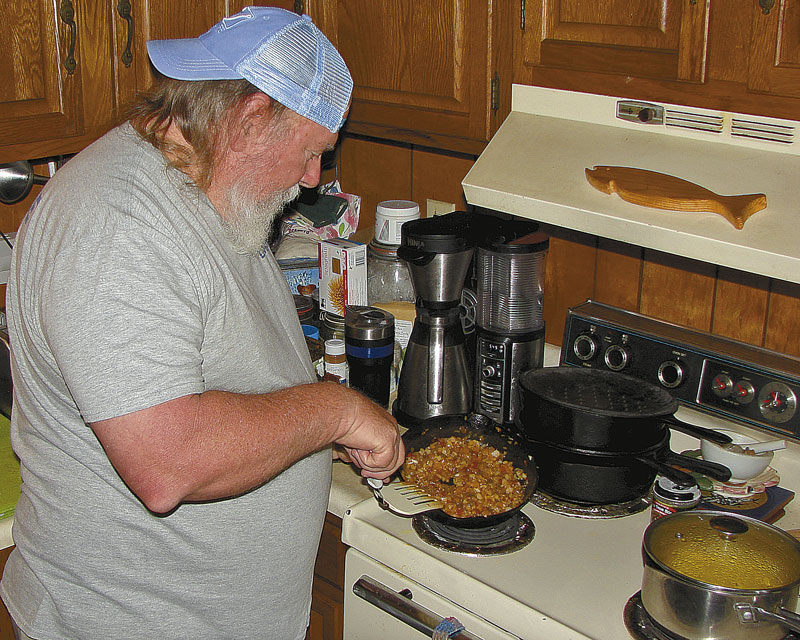 A new twist on Taco Night

We’ve made it into fall, a special time in the Carolinas. It features the best weather of the year — except for those occasional hurricanes that can momentarily push the weather to the bad side. Still, it’s the season most sportsmen find the best, nicest weather and most-pleasant temperatures of the year.

No other season offers more opportunities to enjoy the outdoors during the fall. Hunting seasons are going again, and fishing is as good as it gets. Mornings are cool enough to require a sweatshirt or light jacket. But days warm into shirt-sleeve weather. It’s one of the best times for sportsmen. And there is little wonder so many sportsmen look forward to fall in the Carolinas.

Fall fishing is excellent, and king mackerel are one of the most highly sought-after species. They are available for all fishermen, too. Kings sometimes get so involved in feeding on a school of baitfish they follow them inside larger inlets and can be caught in protected water. However, the better fishing begins at the ends of coastal fishing piers and heads offshore from there.

Menhaden schools are making their way down most beaches, and kings are rarely far from them. They feel the water cooling and feed more ravenously than usual. In this push to feed, they lose some wariness and will hit a variety of baits and lures, making them easier to catch; most fishermen are successful.

Fall kings range from 10 pounds to some reel smokers that weigh 50 or more. There’s a lot of meat on a king, and most folks eat them with a few tried-and-true, basic recipes. This recipe is a different way that I’m pretty sure only a small handful of folks have tried.

I’m going to recommend trying this. Kings are high in Omega 3 fatty acids that can help keep your heart healthy. They taste good, and that’s another good thing. Some folks say mackerel has a strong taste, and that’s okay — for them. However, I disagree. Kings I have eaten that were cleaned well and cooked properly were good. Give this a try. The pieces are small, cleaned of all red meat and cooked properly. Besides, it’s such an interesting recipe, you have to try it. I like it and I’m sure you will, too.  It’s unusually good.

Cook the rice according to the manufacturer’s directions and set aside. Remove all skin and bones from mackerel. Cut the mackerel into bite-sized pieces. Sprinkle the mackerel with the taco seasoning.

Mix the rice, pepper tops, onion, chili peppers and fish in a large bowl. Use a pepper rack or form aluminum foil to place the peppers in a baking pan so they won’t fall over. Fill the peppers to rounded with the fish and rice mixture.

Preheat the oven to 350. Add 1/2 cup of water to the baking pan. Bake for 30 to 45 minutes being careful not to scorch the peppers. Sprinkle approximately 1 cup of cheese over the rice and fish mixture in the peppers. Return to the oven for 1 to 2 minutes to lightly melt cheese.

Serve each pepper with another light sprinkling of cheese and a healthy dollop or two of chunky salsa. An option for serving is to split the pepper, then sprinkle more cheese and add the chunky salsa. Tortilla chips go very well with this and add to the taco taste. I prefer low-salt blue corn chips. I’m a salad guy and would begin this meal with a green salad or lettuce wedge. A slice of key lime pie, with a big spoonful of whipped cream, is an excellent way to finish this meal.

I’ll bet even long-time readers are scratching their heads, wondering about this recipe. I don’t shy from the unusual, and this definitely fits unusual. However, get ready for a pleasant surprise. This odd mixture of ingredients, which I still find difficult to believe can combine this well, works. It isn’t fish tacos, but it tastes like fish and like tacos and is served in a roasted bell pepper. You know you’ve gotta try it.

At least once a year, I remind readers that I like king mackerel. Thinking back to things my dad said about food, I don’t think it will put hair on your chest, but it tastes good and is good for you in measured amounts.

I suggest using fresh king mackerel that was buried in ice as soon as it was caught. Many folks believe a smaller one will have a milder taste. Be sure to clean the mackerel well, removing all traces of the skin and any red or dark meat. It doesn’t matter if the meat is from a fillet or a steak. A fillet will yield a slab of meat, while a steak will yield the four loins. The steak I had, I used a sharp fillet knife to remove the skin and trimmed each loin away from the backbone.

Taco seasoning is a must

The bell peppers really affect the taste. I like the milder and slightly sweeter taste of colored bell peppers, if they are available. If you make this using green bell peppers, take the time to get a pot of lightly salted water boiling and boil the peppers for 5 minutes. This will tenderize the peppers and take the edge off their taste.

Some folks don’t believe it, but cooking rice is an art. I like the rice fluffier and cook it a couple of minutes less than the package suggests. I let it sit a few more minutes than the directions before fluffing it. This helps the rice bond with the fish and veggies. If you like drier rice, cook it the full time suggested on the package.

Spice it up to your liking

If you like a different cheese, feel free to use it. This recipe is the simple version for anyone. When making this just for myself and friends who like spicier food, I use pepper jack. I also have some friends who add a spoonful of sour cream on the top. I encourage experimenting with a recipe.

Hot sauce is a personal choice; some like it, and some don’t. Texas Pete Sabor Mexican hot sauce is a good one if you haven’t tried these or don’t recognize the difference. The Mexican hot sauces aren’t vinegar-based like regular Texas Pete, Louisiana brand and many other hot sauces, and that is important when mixing with this. To me, the vinegar-based hot sauces just don’t taste right. Give this a try; it adds flavor and isn’t fiery hot.

This recipe will fill six peppers, but I only had four. I filled the four and used the excess with a plate of tortilla chips. That was good, too. I often eat it with tortilla chips on the side, and they really do add to the taco feel and flavor. Enjoy!

Bass are changing patterns in December, but they won’t leave bait

December is a transition month for bass fishermen in the Carolinas. […]

Watch for signs of heat stroke in bird dogs in December. […]

This 14-point buck showed up on the opening day of rifle season for one lucky hunter. […]

About Jerry Dilsaver 1123 Articles
Jerry Dilsaver of Oak Island, N.C., a full-time freelance writer, is a columnist for Carolina Sportsman. He is a former SKA National Champion and USAA Angler of the Year.