Celebrate the coming of fall with this neat meal.

Fall has eased back in for sportsmen in the in the Carolinas. Mother Nature hasn’t fully recognized the change yet and is still throwing plenty of warm days, but fall arrived on Sept. 23. Cooler days should become more prominent and begin to come in groups of three to a week instead of one.

Fall means different things to different sportsmen, but all are ready to see it arrive. Some have been waiting to get a whiff of burned gunpowder and have been living for the fall. Others are already engaged in hunting deer using archery equipment.

This is a great time,  when days are still warm but begin and end with cooler temperatures. Sportsmen live to be outdoors, and fall is the time when conditions are most comfortable. It’s also the time when game and fish are most abundant. Take advantage of that and make an offshore trip to get the wahoo fillets that highlight this recipe. There will be plenty left over to enjoy otherwise also.

It’s a great meal to eat from a thermos

At first glance, this month’s recipe appears to be for sportsmen who enjoy excellent fall fishing, especially those who enjoy plying the cobalt waters of the Gulf Stream. However, this is a great meal to carry in a wide-mouth thermos or take to the hunting club for a good warm-up meal. Just because you’re hunting doesn’t mean you can’t enjoy good meals.

This recipe combines parts of two foods most sportsmen like. The pan-searing is a favorite way to prepare fish for many folks. Dumplings are a staple for most southern cooks; they’re just typically thought of as more for chicken. This recipe combines fish with dumplings for a treat that’s going to taste even better than most folks imagine.

Okay, I know you’re wondering what this is all about. It’s simple, really. This is my take on chicken and dumplings, using wahoo instead of chicken and flour tortillas for the dumplings. I don’t really remember where the idea of using taco seasoning came from, but I expect it was having flour tortillas for dumplings. It’s a simple recipe I think you’ll enjoy. You may even decide to experiment using other meats as the base.

I use a little liquid smoke in this, and it’s just enough to notice it. I encourage experimentation with recipes, but I need to offer some caution about liquid smoke. If you want to enhance the smoke flavor, be careful and don’t get carried away adding it. A little goes a long way.

Make the dumplings from tortilla pieces

The tortilla pieces make really good dumplings and are so easy to use. I credit using them to a tip a friend gave me more than 20 years ago. He stumbled across it one day while waiting on his girlfriend, and women’s magazines were all he had to read to pass the time. However it happened, I appreciate the tip.

Tortillas typically come in 16-ounce packages, which usually contain eight to 12 tortillas; I use four or five. Cut them into pieces that will blend with the meat and be easy to pick up with a fork or spoon. I like them in 2-inch squares, but they can be longer and thinner. Just keep them small enough the broth penetrates them throughout in just a couple of minutes of cooking. 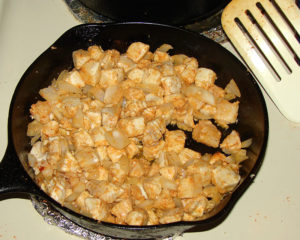 Hot sauce is a must!

The Texas Pete Sabor Mexican hot sauce, or something similar, is a must. This does not have a vinegar base like regular Texas Pete and many other hot sauces, and that is important when mixing with this. The vinegar-based hot sauces just don’t taste right. This does; give it a try.

I believe this is a lot like spaghetti in that it tastes better after it cools and is warmed again. You can definitely tell the difference in flavor, especially in the dumplings.

This recipe makes enough for a meal for a few people. You can double the ingredients and be sure you have some to refrigerate and enjoy later. It’s good enough I don’t have the will power and patience to cook a batch and let it cool to reheat before eating. Give it a try; I believe you’ll prepare it again. Enjoy!

Cut the wahoo into bite-size pieces. Chop the onion and celery. Cut 4 or 5 tortillas into pieces approximately 2 by 2 inches. Sprinkle the wahoo with taco sauce.

Spray a frying pan with the non-stick cooking spray. Lightly sauté the wahoo and onion. Add a cup of broth and simmer for 2 minutes, stirring often. Remove the wahoo and onions from the broth and pour the broth into a large pot. Add the remaining broth, cream of celery soup, celery, liquid smoke, 2 teaspoons of Sabor, salt and pepper (to taste) to the pot and bring it to a boil. Stir in the tortilla pieces while the water boils.

Simmer for 4 to 6 minutes, stirring often, until the tortilla pieces have swollen into dumplings. Reduce the heat to simmer and stir in the wahoo and onions. Simmer for 4 minutes. Remove from heat and serve.

I’m a salad guy and would begin this meal with a green salad or lettuce wedge. Corn on the cob goes well with the meal and, even with the dumplings, there must be bread to sop up the last of the broth. A slice of key lime pie, with a big dollop of whipped cream, is an excellent way to finish this meal. The Texas Pete Sabor Mexican hot sauce must be on the table for those who like a bit more spice.

Click here to read about an interesting soup/stew recipe.

North Carolina’s Youth Deer Hunting Day for 2020 will take place on Sept. 26, allowing hunters 17-years-old and younger to hunt with any legal weapon and kill deer of either sex. […]

It’s time to apply for waterfowl lottery hunts in South Carolina for the 2020-21 waterfowl seasons. […]

Whitetail tactics for the month of the hunting moon

Here’s how a handful of North Carolina hunters bagged big bucks in October. […]

About Jerry Dilsaver 1185 Articles
Jerry Dilsaver of Oak Island, N.C., a full-time freelance writer, is a columnist for Carolina Sportsman. He is a former SKA National Champion and USAA Angler of the Year.