This dish brings out the best in mackerel.

While some things have been a bit unusual this fall, one thing we have been able to rely on is sportsmen hitting the woods and waters and returning with excellent fare for the dinner table. The opportunities are abundant, too — at least as long as the weather doesn’t interfere. Fall fishing will be very good through at least Thanksgiving, and hunting seasons are open.

One of the most-slighted fish that are abundant during the fall are king mackerel. Many fishermen enjoy catching them, but some say they have a strong flavor and aren’t good to eat.

King mackerel are the everyman’s gamefish in the Carolinas. There are schools offshore all winter, and as the water warms and baitfish arrive in the spring, some move inshore from the deep. Others migrate along the coast after wintering off southern Florida or summering off the Outer Banks and Virginia. They are noticeably larger when they return to the beaches in the fall for one last feast before heading south for the winter.

Kings are primarily caught by fishermen in boats, but many are also landed from the ocean piers. They get fishermen excited with clicker-melting runs and occasional T-top tall launches while chasing baitfish. Unfortunately, it’s difficult to get all fishermen excited about eating them. They are delicious prepared in a variety of ways and they’re good for you too, as long as they aren’t eaten to excess. King mackerel are a prime source of Omega 3 fatty acids that help promote heart health and increase our good cholesterol.

This recipe is a unique way to prepare king mackerel. It pairs them with multiple vegetables in a light and easy meal. Hopefully, it’s a way you’ll like and prepare occasionally. Kings up to around 20 pounds have a milder flavor, and there are enough fillets in one of those to enjoy this six or eight times. This will be a great substitute for leftover turkey one of the days of Thanksgiving weekend.

Happy Thanksgiving to all. I hope you have many reasons to be thankful. 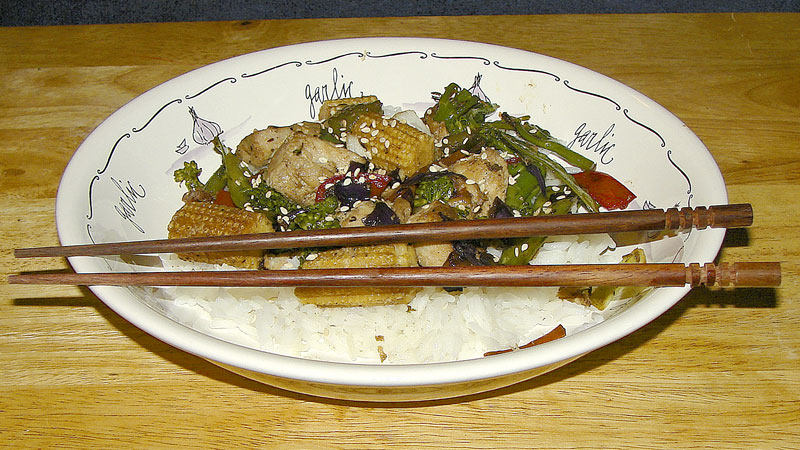 1 can baby corn on the cob,

Cut the king mackerel into bite-sized pieces, \put the pieces in a Zip-Lock bag and add just enough teriyaki sauce to cover them, then marinate in the refrigerator for several hours.

Wash the vegetables and chop the broccolini, bell peppers and onion. Shred the cabbage and carrots. Cook the rice according to its directions.Heat a little olive oil in the FireDisc on high until it pops when sprinkled with water.

Serve the stir fry over the rice. Top with roasted sesame seeds and sprinkle with soy sauce (or teriyaki, tamari or coconut amino sauce) to taste.

This is a one-plate meal. It has meat, multiple vegetables and a starch in the mixture. All you need to add is a glass of ice-cold, sweet tea or your favorite adult beverage. If you would like dessert, it should be light, like pudding or sorbet.

I cook this in a FireDisc, but it could be cooked in a wok.

I’ll go ahead and say it up front and out loud — I like eating king mackerel. The only quantifier to that statement is that it must be cooked properly. It can’t be fried in old oil, and it can’t be overcooked. If you get those two things right, it’s pretty good.

I prefer kings in the 15- to 20-pound range, as they sometimes are a bit milder and are large enough to have steaks the right size, but I’ll eat larger ones, and they’re good too. This was prepared with a couple of fillets from a king of approximately 25 pounds, and it disappeared quickly after the pictures were taken.

I like simple recipes, especially those that can be done in a single pot or pan. This doesn’t quite meet that standard, as it requires a second pot or rice cooker to prepare the rice. However, it’s still pretty simple; the most difficult part is chopping the vegetables.

I believe simple is better and keep it that way by marinating the mackerel in teriyaki sauce and using a little low-sodium soy sauce sprinkled over the combined rice, veggies and fish. Some folks like a sweet, brown sauce over their stir fry. That may work well with chicken or beef, but I think it’s too much with mackerel.

King mackerel is the featured ingredient in this recipe, but there are lots of vegetables. If you have a grill with a side burner, all of this can be prepared outside on a mild November evening. Even when it’s cooler outside, and I prepare the rice inside, I like to cook the stir fry outside on my FireDisc Cooker.

I’ve featured this cooker in several recipes in the past and have tried to describe it several ways. I keep coming back to calling it a cowboy wok; that describes it pretty well. They’re made in Texas and are a heck of a big steel, rounded-bottom pan and stand for cooking outdoors.

By cooking outside, I don’t have to deal with the whoosh of steam when the fish and vegetables are dumped into the cooker. If you cook inside, be sure to have the stove vent fan running on high when you add them.

The biggest thing with this recipe is to be sure not to overcook anything. It goes south quickly if you overcook the fish or get the vegetables mushy. When you get it right, this is far better than you think it will be. It surprised me the first time we made it and it continues to do it. Give it a try and I believe you’ll like it — maybe even enough to cook it again. Enjoy!

About Jerry Dilsaver 1185 Articles
Jerry Dilsaver of Oak Island, N.C., a full-time freelance writer, is a columnist for Carolina Sportsman. He is a former SKA National Champion and USAA Angler of the Year.