In case you haven’t been paying attention to anything lately, fuel prices are at an all-time high, even when adjusted for inflation.

Blame whatever you want, gasoline alone has approached $5/gallon this summer and doesn’t look to be retreating much anytime soon. Diesel fuel is even higher. Any marina manager will tell you that they are seeing fewer trips this season, with the stated reason as “the price of fuel.”

We all still want to go fishing though, right? Here are a couple of concepts that will help you still be able to get on the water without taking out a second mortgage just to fill the tank.

The most immediately effective way to do this is to remove unnecessary items from the boat. Take inventory of the lead you keep on the boat. If it hasn’t seen the water in several seasons, it probably won’t be needed on the next few trips, either.

Leave a couple of your “just in case” downrigger balls behind. If you’re not going to the bluewater, take the outrigger poles down and put them in the garage.

It requires some trade-offs here and there. But if you can set your expectations for what you will be fishing for, you can narrow down what you need, potentially saving some critical weight. Instead of filling an in-deck fish box completely up with ice, a good investment is a fish bag, the style that kingfish anglers use in tournaments. You’ll need less ice, as the insulation on those bags is extremely efficient. And these bags hold much more than you think.

A lot of newer center consoles have three livewells. That’s great for easy access and segregating different baits. The larger, 55-gallon and greater capacity livewells can add some serious weight to your vessel when full. If they’re being used, then great.

But you can drop some mass instantly at the end of the day (before making the run back to the dock) if you cut them off, then close the seacock to the pump that fills them, leaving the one connected to the drain open. Your boat will immediately ride a little bit higher in the water. Does your 60-gallon freshwater tank have to be completely full, or could you get by with 15 gallons for a trip?

You don’t want to risk running out of fuel, of course, but you don’t need 150 gallons in the tank if you are running to the buoy to chase cobia. Leave yourself a reserve, and don’t forget to add in what you will be burning while trolling or checking out a different spot. But a partially filled tank will lead to a lighter boat.

Just pushing the throttle to the dash with the trim tabs all the way down isn’t the best way to save on gas. Try three-quarters throttle with just a bit of tab, if tab is even necessary. Play around with it. Modern gauges are getting very accurate with regards to fuel consumption now, especially when they are linked to GPS. Keep watching the gauges. You’ll figure out quickly when you get it right. 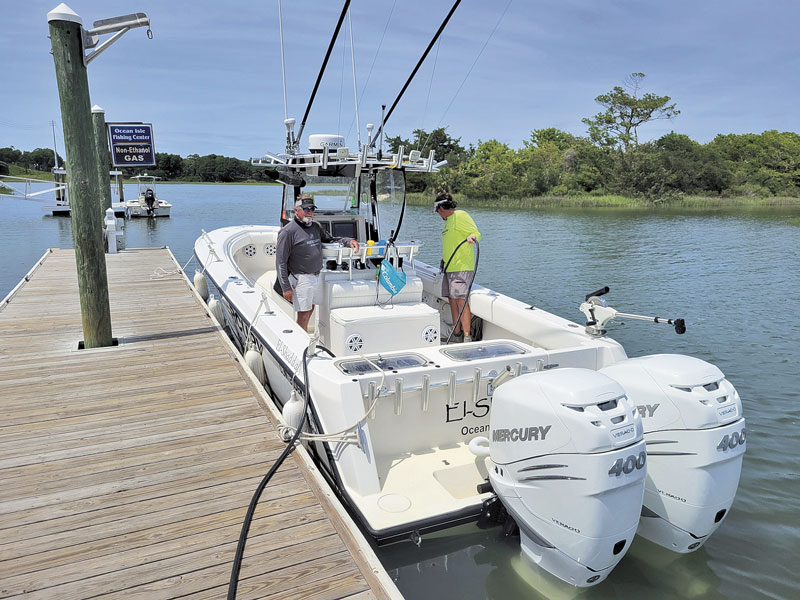 If your saltwater fishing platform is trailerable, chances are that your truck gets better fuel economy than your boat. A lot of times, a boat ramp may be closer to your spot than the one you have traditionally used. Do the math. If 20 minutes in your truck saves you having to run 6 miles each way on the water (12 total) and your boat at current load gets 2.4 miles per gallon, that’s 5 gallons of gas you don’t have to burn on the water. You have to know your truck’s fuel economy when towing too. But automotive engines are usually a good bit more efficient than outboards.

Live bait is usually your best bet during the summer months. Every nice morning, boats are generally just offshore of any beach in the Carolinas, running up and down looking to throw a cast net at menhaden.

Menhaden (pogies) are great bait. But chasing schools of them up and down the beach burns fuel. Instead of this method of “making” bait, plan a stop at a nearshore artificial reef that’s on your way to the spot, and rig up a couple of rods with sabiki rigs. Load up on cigar minnows, which are generally kingfish candy in July. Then use a larger sabiki with tiny pieces of cut squid to score some pinfish for grouper bait. It’s a great diversion if you have kids or anyone new to saltwater fishing on board as well. If the baitfish are thick you can get the skunk off the boat really quickly this way.

It’s also vital to know the weather report heading into your fishing day. Most importantly, what direction will the waves be coming from?

You will be most comfortable and efficient running down-sea coming home. But that usually means you must run into a head sea going out. Banging straight onto the waves headed offshore is no fun. It’s also the least fuel efficient.

Running in the trough can be squirrely at times. But it’s the best compromise for both legs of the trip. You can also work your way up or down the beach while fishing to get a slightly better angle for the trip home as well. The more the waves are behind you, the nicer (and cheaper) it will be.

Pompano dolphinfish are cousins to the common dolphinfish (mahi mahi), and are often misidentified as that species. […]

Shallow for August bass? You bet

The water is plenty hot in August, but bass will be in shallow water because that’s where they find the best water quality. […]

Bow hunting is a journey

Bow hunting is about much more than just the destination; it’s the journey that really makes the difference. […]

Turn poachers in, get cash reward