You need to hide from ducks in a plastic boat.

From the looks of things, it appears that an at-least moderate drought season will land across the Carolinas about the same time as duck season. Last year, there was too much water, and this year, there won’t be enough.

Savvy hunters know you have to go where the birds are, and last year, that meant paddling back into flooded fields. This year’s task will be much more difficult. Although receding water tends to concentrate ducks, it also means walking across huge expanses of boot- and wader-sucking mud to get to the water. It also means forget about getting in there with a powerboat.

Duck hunters should expect to spend their hunting time in the seat of their boats rather than paddling in, hiding the boat and ducking down behind a stand of trees like last year. In order to hunt from your kayak, you’ll need to make it invisible to flying eyes.

Kayak waterfowlers have a multitude of options when it comes to camouflaging their boats. You can buy ready-made concealment blind systems, stretch the covering over the bow and stern of your boat, cinch it down, and you’re ready to go — or you can make it yourself.

Time spent scouting your intended hunting areas will tell you where the birds will be flying and landing, but also the terrain you’ll need to match your blind to in order to fit in.

Waterfowl hunting in these conditions dictates you won’t have the storage space for a big spread of decoys. During the early season, when the pickings include mostly resident birds anyway, a flock of a half-dozen usually does the trick.

In a typical, low-water scenario, try to arrange the blocks around your concealed kayak. Again, the reduced amount of water is going to limit where birds can and will land, so the emphasis is drawing them to you. 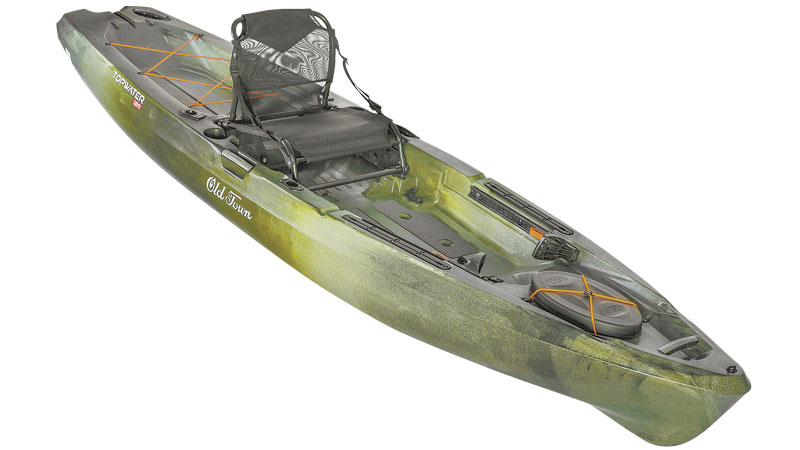 The Topwater 120 offers large fishing-kayak performance, in a compact, nimble package. A marriage of stability and performance, the Topwater quietly glides through the water while providing a stable, comfortable stand-up fishing platform. Equipped with on-board tackle and rod management and a revolutionary universal transducer mount, even the saltiest of anglers will be impressed by its overall fishability.

Available in both First Light and Olive as camo options, the Topwater 120 features an ultra-stable DoubleU™ Hull Design that offers unmatched stability and precision handling in a compact easy-to-transport size. Sneak up on the fish and game in the quietest pontoon-style hull on the market.

An oversized stern tank well, coupled with impressive hull capacity, provides one of the roomiest fishing kayaks on the market. The breathable ElementAir™ seat has high/low positioning, and EVA foam deck pads help with traction and all-day stand-up fishing comfort. Stay organized and easily access gear with three rod holders (one forward-facing) and thoughtfully-placed onboard rod and tackle storage. 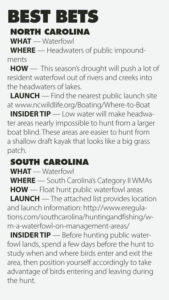 Rarely do kayak-bound duck hunters employ their tricked out fishing rigs as their waterfowl rig. For the fishing rig, shiny and bright is good, while the hunting rig needs to be exactly opposite. Other than comfortable seating, the amenities desired in a good fishing rig are lost on a hunting rig.

To make it blend in, start with a drab color or use some sand paper to create a rough finish on a brighter color and apply lots of drab paint. You can do the stencil or silhouette painting to impress your friends, but it won’t fool ducks if you don’t do some serious breaking up of your outline.

The internet is full of D-I-Y articles that suggest adding netting or natural grasses via loops or zip ties to the boat. Again, unless you can add something that’s going to drastically change the overall shape and appearance of your boat, you’re going to stick out like a sore thumb.

Consider ways to integrate your kayak into the landscape. If that’s a sand bar, bring a shovel and dig in. If it’s a dried-up stump field, go with darker shades and use a saw to integrate some old, dead lumber.

One of the best camouflage systems I’ve ever seen was no camouflage at all. A friend and I were hunting the early goose season right after Labor Day and discovered the more we acted like hunters, the more alarmed the flocks of geese became when we approached. Changing over into T-shirts and shorts, as well as talking loudly to each other while paddling, we managed to push several flocks into a dead-end cove and have our way with them when they could go no further. They were barely off the water when we splashed up into gun range.

Camouflage means matching your surroundings while not being noticeable. Apparently, camouflaging ourselves as noisy touring paddlers was much more effective than looking like the Creature from the Black Lagoon in a kayak. 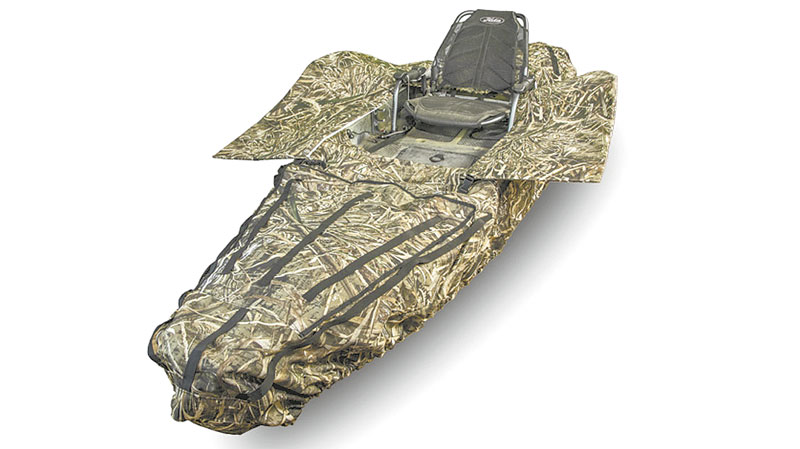 Transform your kayak into a hunting machine with the YakGear Ambush Camo Kayak Cover & Hunting Blind. The drawstrings at either end make this a universal fit on 12.5- to 14.5-foot kayaks and canoes. It uses two flaps in the middle, connected by buckles, to conceal the hunter until he is ready to fire. Lie down and wait for your shot, then sit up, and you’re ready to fire.

Made of rip-stop material and available in RealTree Max5 camo, tears should not be a problem if you run into any thick brush. Also included is an over-sized Velcro flap in the back of the blind for access to the rear storage area. Boat handles are accessible at the front and back through slits that are pre-cut into the cover. You can also add your own brush using pre-sewn vegetation webbing straps. A Stow bag is included for easy transport.

Two concealment flaps to hide the hunter before the shot is taken with rear flap to allow access to storage. Bow and stern rope drawstring allows you to pull the front and back tight to hold against gunwales.

CCA SC continues to aid the SCDNR in doing research on cobia, an important species to recreational anglers up and down the east coast. […]