Saltwater or cold-water, the Carolinas are full of trout within reach of kayakers

Regardless of where you launch your kayak, there’s a pretty good chance that a trout could be on the hit list this month.

Although located on opposite ends of the Carolinas, and not even related, the late summer heat of September cooling into October is a great time to be paddling a cold, mountain lake, looking for rising salmonids or a coastal marsh casting a popping cork in hopes of beating a drum.

The Carolinas are blessed with abundant, wadable trout streams. But most paddling fans who choose to pursue a coldwater trout do so in one of the deep, clear reservoirs that dot the southern Appalachians. South Carolina’s standalone public trout reservoir is Lake Jocassee. This 7,500-acre reservoir whose tributaries spill over into North Carolina is only accessible from Devil’s Fork State Park in South Carolina. 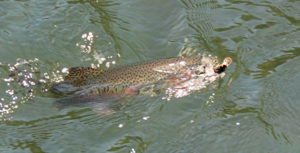 A member of the drum family, spotted seatrout, aka specks, are closely related to redfish. But they bear a striking resemblance to freshwater trout. Speckled trout can be found in marshes, tidal creeks and inshore/nearshore waters from the mouth of the Savannah River in South Carolina to the northern edge of Corolla on North Carolina’s Outer Banks

Speckled trout stocks in both Carolinas have taken hits over the years from extended cold weather during the winter. But they have made or are making remarkable recoveries in both states.

Trout are quite willing to take a topwater bait. And they are also notorious schooling fish that may feed and school in one specific area profusely during the fall. So much so, that kayak anglers can anchor up or use a stakeout pole and never have to move again once a large school is located.

One such excursion was the trout trip two buddies and I took nearly 10 years ago. A multi-stop tour across South Carolina started at daylight at Pleasant Ridge State Park Lake in Greenville County the day after the lake was stocked. The fourth cast of a Mepps Aglia No. 1 gold blade produced a freshly stocked, 9 ½-inch rainbow trout for one of our group. We released the fish and loaded the kayaks. Then we took a short run down SC 11, landing on I-26 headed east.

We briefly discussed whether the next stop would include the tailwaters of Lake Hartwell in Lake Russell or the Saluda River below Lake Murray — or both. The discussion also included whether the goal was for each of us to catch a trout at each stop or just one of us. Only two of us had landed a trout at our first stop.

The decision was to sample only one of the coldwater trout-fishing venues below a reservoir in the same day. So we put in 2 hours and change later at Saluda Shoals Park in Richland County on the Lower Saluda.

Stop No. 2 was designed as a short float trip that ended up costing us more time parking cars. No sooner had we rounded the second bend than one of my buddies hooked a decent rainbow on a Rebel floating minnow. Fortunately, we all hooked up on the run to Gardendale, our designated takeout spot a few miles above the I-20 bridge.

The next stop was Bushy Park Boat Ramp in Goose Creek. We put in on the Cooper River side, and unfortunately, we hit it at dead high tide. We spent two hours, putting us into late afternoon before I managed an undersized speckled trout on a D.O.A. shrimp fished under a popping cork. No one argued about only one trout coming from Bushy Park.

Next, we waded through metro Charleston traffic, to Paradise Landing near Awendaw. Not far, as the crow flies, from Bushy Park. But time in the truck made it seem like a long distance apart.

We had an hour before dark and a fast-moving falling tide. But all three of us had “insider information” from local kayak anglers on where to catch a speckled trout. And the day ended with at least one speckled trout for each of us.

From Feelfree Kayaks based in Swannanoa, N.C., the Lure 13.5 Overdrive features the modern evolution of pedal-powered kayak propulsion. This craft offers effortless speed, ease of use and adaptability. The Overdrive unit is the only 2-in-1 system that offers forward and reverse pedal- or power-driven capabilities in a single unit when paired with the Motordrive. It features a one-handed rudder-steering lever control. The Gravity Seat adjuster offers accessibility and comfort. The system is manufactured using cast aluminum and finished off with heavy-duty components.

The 13.5 version is a longer, faster, extremely stable and capable, bigger-water version of the Lure 11.5 and 10. It features a front multi-use console directly behind the bow hatch. The console lid features an inlaid cutting board. The kayak also comes with a variety of unique comfort features from the Lure series. These features include the removable, multi-height adjustable Gravity Seat, Wheel in the Keel and sturdy molded-in handles.

Like most Feelfree kayaks, the Lure 13.5 comes with the Uni-Track system for unlimited outfitting configurations, flush-mounted rod holders and a large tankwell to store your gear or a cooler. The super-stable, 34-inch wide hull paired with an extra-large, padded standing platform gives you the option to paddle or cast in either the sitting or standing position whether fishing inland waters or wide open oceans — this kayak fears no water.

HOW — Casting artificial lures such as in-line spinners or small, minnow-imitating lures. Fly fishing is also a good bet.

LAUNCH — Llewellan Branch, at the upstream end of Cheoah, just below Fontana Dam

INSIDER TIP — Trout tend to move up and down the lake, depending on the weather and season. Mountain trout are not particularly known to school. But several fish may hold in the same general area because of water conditions and temperatures.

HOW — Target trout in backwater estuaries, large bays and inlets opening to the Atlantic Ocean. Try casting live or shrimp-imitating lures to grass or shell banks. Trout also favor water along shell banks that reach out from points, especially around creek mouths.

INSIDER TIP — It’s hard to beat fishing live shrimp under a popping cork. But if the fish are finicky, try using a split-shot rig without a cork.

These fly rods deliver elevated performance at a decidedly down-to-earth price. Handcrafted in the U.S.A., they are without equal in performance and value.

The rods are sold with a rugged rod case and divided polypropylene liner and a 15-year transferable warranty.

COVID-19 is still having an impact on some programs offered by SCDNR, but hunting and fishing seasons and regulations remain unchanged. […]

Tough weather has meant fewer anglers Unseasonably cool weather was welcomed by Outer Banks anglers this past week, and it didn’t slow the fishing at all. Rough seas did make things sporty for the offshore […]

The smallest, and only outboard-powered center console boat on the Big Rock leaderboard, PELAGIC HUNTER II leads the field with a 495.2-pound blue marlin. […]