Few fish hang out in the shallows during cold weather

Winter fishing from a kayak requires a bit of a mindset change as fish — bass, crappie, stripers and catfish — rarely spend as much time in the shallows as they are prone to do in spring. This means it’s time to paddle to more open, deeper water to catch fish.

One of the best ways to pattern winter fish is by watching the skies. As the water temperature dropS, baitfish schools, primarily threadfin shad, group tightly and may even start to die off as the colder water slows their metabolism.

This vulnerability makes them prime targets for aquatic birds like seagulls, loons and terns, which migrate inland from the coast over the winter when saltwater baitfish vacate the marshes for the open ocean.

If you’ve ever watched one of the nature-themed television shows about the blue ocean, a similar scenario is taking place in the dull-green waters. Baitfish are pushed towards the surface by predator fish, while birds dive down and pick at the schools from the surface.

At the top of the list or target species for this pattern are striped bass and hybrid bass, which become considerably more active during the colder months.

Surface schooling action can be fast and furious for stripers, while anglers cast noisy topwater or sub-surface baits into boiling water to fool stripers charging up from below.

Anglers targeting largemouth bass, spotted bass or even crappie in reservoirs can find similar success targeting bottom structure as the sunfish species are less prone to chasing baitfish in open water than hiding around structure and ambushing them as they swim past.

Probably the most dependable of all winter fish species in the states’ freshwater reservoirs are the non-native but delicious white perch, which are in the same family as striped bass. White perch feed aggressively throughout the winter.

Large schools of white perch will move frequently but tend to gravitate to points. Anglers choosing to target white perch will benefit from having a decent sonar unit attached to their boat. In addition to the water birds ear-marking feeding activity, look for white perch to stage on these long points on the windward side of the lake.

Anglers who prefer artificial baits simply need to tie on a small to medium-sized jigging spoon in flashy colors to tempt perch into biting. The size of the bait mimics the size and swimming action of threadfin shad. Live-bait anglers can drift or troll with multiplehook rigs of small to medium minnows or pieces of cut bait.

Either method will frequently result in anglers catching a mixed bag of striped bass, hybrids, black bass, crappie and possibly even a catfish or two.

Finally, much of winter fishing success is watching the weather. Gray, overcast days will provide much better bird-watching, surface-schooling action longer into the day than a bright, blue bird day. Days will minimal winds up to 10 mph are also preferred over gusty windy days.

Inshore fishing guide John Ward of Charleston, S.C., doesn’t rely on catching that one perfect day out of a week of rough weather to travel to nearshore reefs to catch sheepshead. Ward finds he has all the inshore sheepshead action he can handle fishing around structure on local creeks and rivers.

“A lot of sheepshead will move out to the reefs during the winter, but it’s a misconception that they completely vacate inshore waters,” Ward said. “The key to finding sheepshead inshore this time of year is finding the right kind of structure.”

Ward looks for a creek or river that holds a minimum of 4 feet of water during the low phase of the tide. What makes a location even better is to find fish-holding structure such as piers, docks, riprap walls or blowdown trees on the outside bend in a creek or river.

“The current will wash out the outside bend and make a deeper hole,” he said. “Sheepshead love to bunch up in a deep hole during the winter.”

Finding sheepshead bunched up on structure is the perfect opportunity for inshore kayak anglers.

“I want to anchor up out so I can fish straight down,” Ward said. “That helps detect those famous quick bites without having to fight current or line angle. I’m also not concerned about putting a boat right on top of the fish. Sheepshead don’t seem to be as spooky as other fish, especially during the winter, maybe because they’re used to hiding under boat docks.”

HOW — Not all sheepshead move offshore, especially early in winter, and they will often stack up on deep structure such as bridge pilings as the last of the bait moves to deeper water. This is finesse fishing, as fish won’t move far to take a bait when water temperatures dip into the 50s.

INSIDER TIP — Try using live fiddler crabs on a bottom bouncer rig. Having two baits per rod helps tempt fish and doubles your chances at a hook up.

HOW — It’s time to be pulling free-lines and planer boards while fish are feeding on schooling baitfish. Most tributary creeks from the mouth to the middle will hold bait, particularly on long points. Make sure to keep one rod rigged with a topwater bait.

INSIDER TIP — Watch for birds to give away baitfish locations by working schools of bait while fish feed on bait from below. 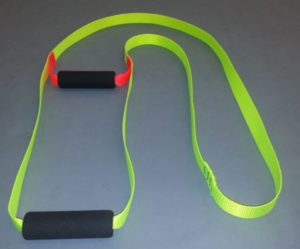 Sav-A-Jake International is introducing a new product: the Kayak Self-Rescue Ladder. This ladder system allows for easy re-entry into a kayak if you fall out. It also serves as an assist device to right the kayak if it is overturned. The ladder is made from industrial-quality nylon webbing which forms the flexible loop. Two foam steps/handles allow for a sturdy yet comfortable grip when using the product.

Simply hitch the top end of the loop to your kayak handle or cleat and secure. The flat webbing stays tight once cinched in place. The ladder works on both standard and wide SOT kayaks.

Hey, Rocky! Wanna see me carry a bunch of pre-rigged rods in my kayak?

Kayak anglers need to be able to have multiple baits and presentations rigged and ready to meet every situation that might be encountered. One of the challenges of carrying multiple pre-rigged rods is where and how to store them where they can be reached at a moment’s notice but not be in the way of fishing.

The folks at Yak Attack have accepted this challenge with the development and design of the track-mounted Bullwinkle Rod Stager.

The Bullwinkle Rod Stager attaches to any YakAttack GearTrac, MightyMount and most other factory track system. An additional bonus for tournament anglers is it features a slot designed to hold the Hawg Trough Measuring Board. Now you can not only have a wide selection of pre-rigged rods at hand, you can also have your measuring board stored where it won’t fall overboard, won’t be in the way, and be ready for use as soon as a fish is boated.

Several factors are important in finding and selecting that perfect tree for an archery stand for deer. Here are some easy to follow tips. […]