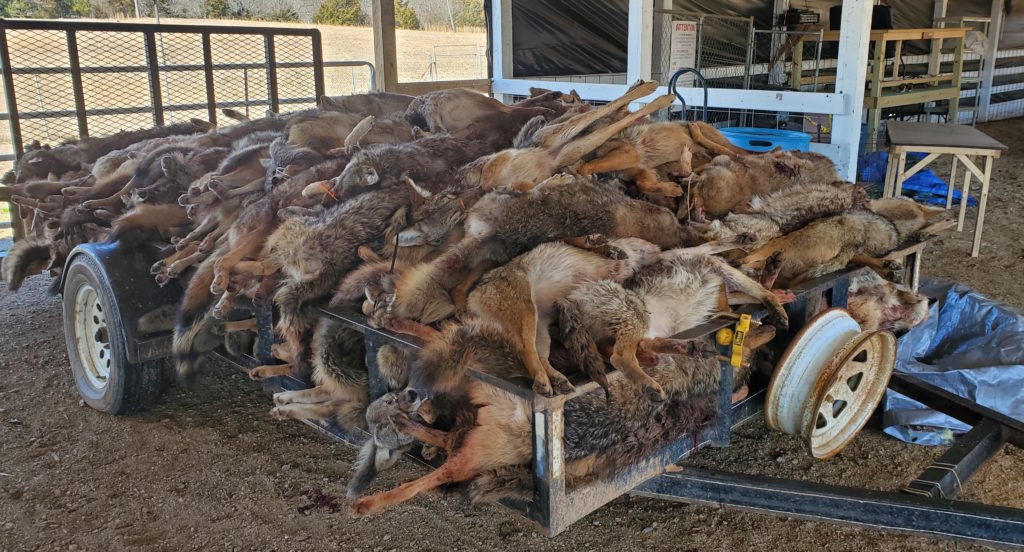 Every record was broken during 2021 Carolina Coyote Classic

Predator hunters competing in the 8th Annual Carolina Coyote Classic this past weekend killed 272 coyotes. That’s a record number of kills during this event. And that’s not the only record that was broken this year.

“We broke every meaningful record in this year’s event. We had the most teams registered, the most hunters participating, the most money paid out. It was a record breaking year for this event,” said John MacPherson of 704 Outdoors and the chief organizer of the event.

This was also the first year the Classic paid a bounty for each coyote. Every coyote that was brought to the weigh in was awarded a bounty of $20. In past events, teams killing 10 coyotes and finishing in 10th place or so did not take home any prize money. But this year, a bag of 10 coyotes earned $200. That’s an incentive unlike any other in predator hunting events.

Of the 272 coyotes killed during the event, 236 were weighed in. Those not weighing in ‘yotes were mostly from teams a great distance from the weigh-in at the Stanly Fairgrounds, and opted not to make the drive knowing they weren’t in the running for the win. These teams were not eligible for the bounty, which raised the stakes for the 236 dogs that were weighed.

Team Thermal Optics Plus took home the top prize. They killed 27 coyotes and took home $2000 cash along with a C3 Belt Buckle trophy.

(Tie breakers were based on time of 1st kill video)

The Little Dog award in the Derby went to Team Stanly, Davis, Leonard. They won an AR-15 lower receiver from All Seasons Outdoors.

The Carolina Coyote Classic also had a Fat Dog category. This was a separate class from the Derby, and teams were only allowed to enter one class. The Fat Dog class had 56 teams sign up. Eighteen of those teams officially weighed in coyotes.

The rest of the field:

The tournament also featured a Big Female Side Pot, which was open to all participants. Team STRATA won the side pot with a 41.1-pound female. This ‘yote set another record. It is the largest female coyote ever entered in the Carolina Coyote Classic. STRATA earned $410 cash for the big female.

The Coyote Bounty Pot was sponsored by DNA Firearm Systems. The pot totaled $4720, which put the value of each coyote weighed in at $20.

More than $14,730 in cash and prizes were awarded at the end of the tournament. With some very nasty weather taking place before and during the even, MacPherson said he couldn’t be more proud of his team and all the competitors who participated to make this a record-breaking event.

“We’re already putting plans together for the 2022 Carolina Coyote Classic. We’ll look at the moon phase and talk about it some before decided what’s best for the hunters. Then we’ll set the dates so everyone can put it on their calendars,” he said.

Coyotes are breeding, making this a great time to hunt

January through March is coyote breeding season, and you’ll increase your numbers by calling and being patient this time of year. […]

It’s time to pattern your shotgun for turkey season

It’s time to pattern your turkey gun with the right combination of shotgun, choke tube, and load size. […]

How to gain land access to hunt hogs and coyotes

Finding access to hunting land can be a challenge for coyote and hog hunters, but with these tips, you’ll find and keep access from landowners who are happy to have your help. […]