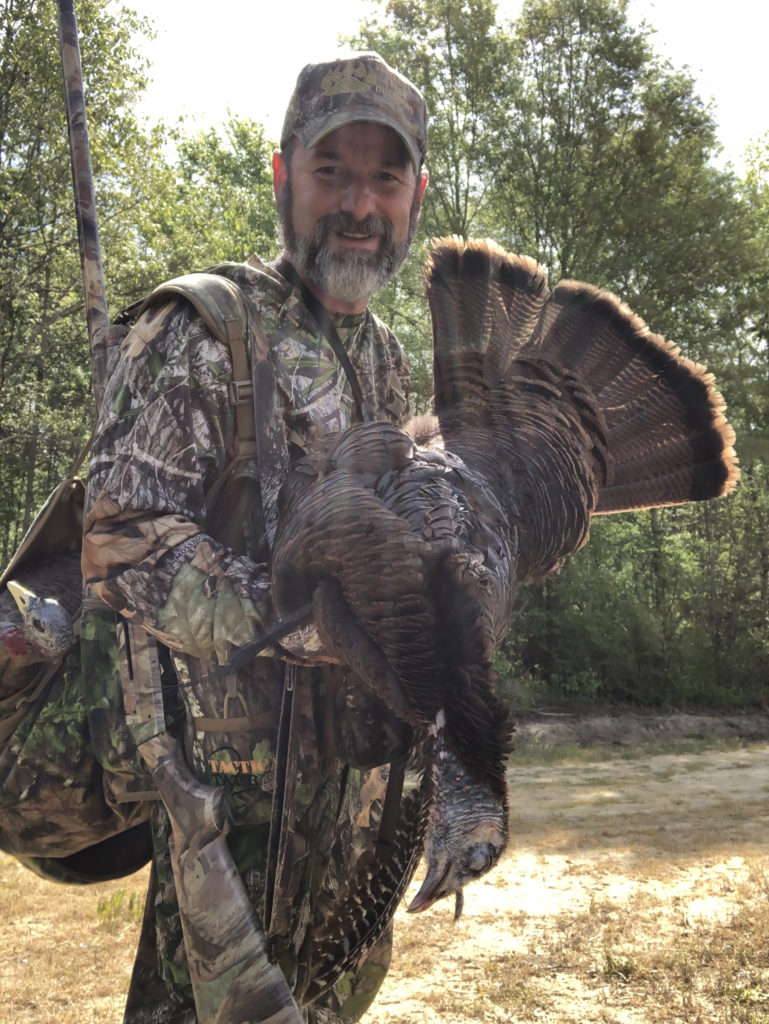 “I saw what looked like a 2-year-old gobbler with a hen. But I thought, its head wasn’t red enough,” said Mooring, a 49-year-old government contractor with the N.C. National Guard. “I got my binoculars up. And it turned out, it was a bearded hen.”

About one in 50 hens wears a beard. Most are thin and less than 6 inches long. That’s what makes this bird even more special. After Mooring dropped her with a single shot from his 12-gauge Benelli Super Black Eagle II shotgun, he got the bird weighed on certified scales and measured the beard. The hen weighed 11.42 pound and carried an 8 7/8-inch beard. It’s likely one of the five best bearded hens ever taken in North Carolina.

And Mooring wasn’t really even hunting

“I work with a group called Veterans Creed Outdoors,” Mooring said. “We had five veterans out that morning, camping in a remote KOA and turkey hunting. I was the only one without a hunter. I was really just scouting, looking at places for the afternoon hunt.”

Mooring got out early and heard one gobbler deep in the swamp. But the bird shut up as soon as it left the roost. About 6:40, he headed for an old cotton field, grown up with weeds, where he saw a hen. She was feeding, but she kept looking back at one spot.

That’s when he saw the hen with the beard of a gobbler.

“All three of them came together in the middle of the field. And she made it clear she was the dominant hen,” Mooring said. “I made a move. I went back into the woods and went way around to the corner of the field I thought they might be going, and I set up in a little bush.

“They were just coming across that field, clipping seeds.”

Mooring is having the bearded hen mounted

“I was texting all the other guys. But I didn’t have good (cell phone) coverage out there,” he said. “But I found out that everybody had great close encounters, but nobody else killed a bird.”

Mooring, a member of the Tar River Chapter of the National Wild Turkey Federation, went home and started doing research on bearded hens. He tried to find something on the National Wild Turkey Federation’s website, then ran across an archived article from Carolina Sportsman about the state-record bearded hen. That bird was killed in 2016 by John Money of Trap Hill, N.C.

Mooring decided to mount such a rare bird. And when he met with taxidermist Ken Smith at Boon Hill Wildlife and Game Processing in Princeton, Smith mentioned that the bird was awfully heavy for a hen. They put in on certified scales, and it weighed 11.42 pounds.

Money’s bird, Mooring knew, weighed 12 pound and carried a 9 1/2-inch beard. Mooring and Smith measured the beard on his hen at 8 7/8 inches.

“I’m getting it registered with the NWTF. She might be one of the top five in the state,” he said.

Bridges are crappie magnets during summer

About Dan Kibler 849 Articles
Dan Kibler is managing editor of Carolina Sportsman Magazine. If every fish were a redfish and every big-game animal a wild turkey, he wouldn’t ever complain. His writing and photography skills have earned him numerous awards throughout his career.