The peak of the white-tailed deer breeding season, aka the rut, is likely the best time to catch an old buck thinking about something other than staying safe. Here’s an outfitter’s guide to the particulars.

The rut is the prime focal point for “big-buck” hunters in the Carolinas, and with good reason: bucks are on the move. Not just bucks in general, the big, multi-pointed, thick-tined trophy animals caught by trail cameras during the summer suddenly reappear and are as vulnerable as they’ll ever be.

A good hunting strategy is vital, and knowing when and where to hunt during the rut is the key to success.

Jim Boone has operated a highly successful commercial deer-hunting operation, Red Bluff Hunting Lodge in Allendale County, S.C.,  for the past 22 years. He said a significant portion of his season’s success occurs during the rut.

Boone’s insights are based on two decades of harvesting data at Red Bluff, coupled with scientific and biological assessments of that data. Boone’s educational background, a degree in wildlife, fisheries and aquaculture from Clemson, coupled with a comprehensive data-collection system, has produced detailed information on hunting patterns. He records and tracks data on every hunt and harvest, including wind direction, temperature and stand location.

“The specific timing of the rut varies based on location,”

“But within that window of time, other factors influence hunting during the rut.”

Boone (803-300-1179) tracks weather patterns’ impact on hunting success; most veteran hunters associate cool snaps with improved hunting, and Boone has data supporting that belief. While hunting any time during the rut can be productive, a cool snap does improve deer movement during daylight hours when hunters can be in stands.

“We hunt every day, but hunters with limited time would do well to focus on cool snaps,” he said. “During the peak rut at Red Bluff, a reduction of 5 to 7 degrees in average air temperature causes everything to go wild in terms of hunters seeing bucks. Typically, when the weather is hot, much of the chasing and breeding occurs at night. But when a cool snap occurs, daytime deer traffic is noticeably and immediately improved.”

“I’ve found a remarkable correlation that as the temperature decreases during the rut, the odds of hunter success increases,” he said. “Furthermore, if we get a big drop in ambient temperature that gets us a frost during that 30 days of peak rut, the deer activity is almost too hot to handle.”

But much more goes into successful hunting during the rut than simply being in a deer stand. Being in the right stand in favorable habitat with the wind played correctly is paramount to success. Boone’s stand selections for hunting the rut are based on habitat and wind direction.

“The rut is generally about where the does are or have recently been, because the bucks are going to follow,” he said. “Stands that work best during the rut have certain characteristics that favor success, and one is to have stands where does are abundant and visibility is high.”

Boone said the time to kill a buck is when he’s seeking a doe, before he’s actively tending a doe in estrus. When bucks are seeking or looking for a doe in estrus, they’re on the move, but in a manner that gives a hunter more time to react with a well-placed shot.

While bucks are killed while actively tending does just before breeding, the shot is often more difficult, frequently on a moving target in thick, gnarly cover. 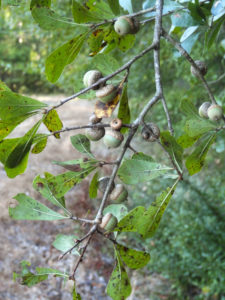 “I’ve spent countless hours in stands, and seeing a buck and doe actually mate is rare,” he said. “That usually occurs in a private, isolated area. Hunting where deer actually breed is a lower-percentage option, because it covers only a small area, often with a restricted field of view. You have to be spot-on in your stand selection and then still get a little lucky.”

But stands that take advantage of the seeking phase consistently produces best.

“I want hunters in stands that have open areas to view because it enables hunters to see more deer,” he said.

Boone said during the rut, deer travel in predictable areas, including transition zones between different types of cover, such as fields and woods. They’ll utilize funnels and bottlenecks to travel in the search for does, and they love utilizing cutovers during the rut.

“Cutovers with 3 to 4 years of regrowth are ideal for multiple reasons,” he said. “Cutovers provide bedding areas, great cover and food sources. With a properly placed stand, hunters can see large areas, and this dramatically increases the potential to see bucks seeking or tending does.”

Another area to watch are feeding areas, such as spots baited with corn. Boone said bait stations are places deer have been using and continue to use; however, as the rut increases, feeding activity may slow down.

“A doe stopping to feed has the potential to attract a buck at a bait station, so that’s good for hunters,” he said. “But when the rut is full on, I often see baited areas that are not being fed on as heavily, but have a lot of deer tracks going through the uneaten corn. This tells me bucks are watching these areas for does, and when bucks are in the area, that improves odds hunters are going to see them.”

Charles Ruth, big-game program coordinator for the S.C. Department of Natural Resource, said these specific types of areas noted by Boone for Lowcountry hunters are applicable to the piedmont and Midlands areas of the state as well, not to mention matching areas in North Carolina.

“Where cutovers occur in the piedmont and mountainous portion of the Upstate, they’re ideal for hunting during the rut,” Ruth said. “Focusing on areas with a diversity of cover types in any sector of the state is potentially good for hunting this time of the year.”

Ruth said areas near water sources are excellent choices, with creek and river bottoms, interspersed with some thick cover, ideal terrain for hunting.

Hunting around food sources during the rut is a universally productive tactic.

During the rut, hunters need to identify what’s available in their area; it can be persimmons, acorns, late-season agriculture crops, food plots and bait stations, Ruth said. Hunt where does are likely to be found, and bucks will be nearby.

Boone said the most-productive time to hunt deer also shifts during the rut. During the early season, late evenings are preferred by most hunters, and he said the harvest data supports that strategy.

But during the rut, a dramatic shift occurs.

“Tracking our harvest from morning and evening hunts for many years, I’ve found that once the daily temperature drops, as it normally does by the time the rut is peaking, our morning hunting success outpaces the evening hunting by about a 2-to-1 margin,” Boone said.

Boone said to study your land and determine the prevailing wind direction, then set up some stands to take advantage.

“Wind and scent control are still crucial to success,” he said. “Bucks are still wary during the rut, but certainly are more susceptible than at other times of the year. Take advantage of that and always keep the wind in your favor.”

Take a peak at  the rut

What is the peak of the rut? It’s fairly simple.

Biologist Charles Ruth of the S.C. Department of Natural Resources said, “I consider the rut to be approaching a peak when the majority of doe deer in an area are in estrus and receptive.”

“Some minor variations are found in a small area of the Lowcountry; it may occur earlier by 10 days in that small area and two or three weeks later in the mountains, again a fairly small area of our state,” he said. “The majority of the deer mating is between Oct. 20 and Nov. 10, but extend that time period from Oct. 10 to Nov. 15, the percentage of mating is about 83%. That data comes from literally checking thousands of deer.”

“Localized areas can certainly experience peak rut periods anytime within that month, and it may change a bit from year to year based on external factors like condition of the local deer population.

“This historically is the prime time for hunters to harvest big bucks, and for hunters, it’s important to note that this is when the urge to reproduce and propagate the species trumps a buck’s normally very high-level instincts of self-preservation,” he said.

“High daytime temperatures won’t stop the rut, because it’s controlled by length of day, but high temperatures decrease daytime movements in favor of night,” he said. “If daytime deer movements decrease then hunters suffer the consequences.”

Fall is in full swing this month, with inshore and offshore targets firing off on all cylinders, and anglers searching for that ever-so-popular flaky, white flesh can still catch a limit of flounder in Murrells Inlet’s famous waters. […]

Whitetail tactics for the month of the hunting moon

Here’s how a handful of North Carolina hunters bagged big bucks in October. […]

About Terry Madewell 721 Articles
Award-winning writer and photographer Terry Madewell of Ridgeway, S.C., has been an outdoors writer for more than 30 years. He has a degree in wildlife and fisheries management and has a long career as a professional wildlife biologist/natural resources manager.