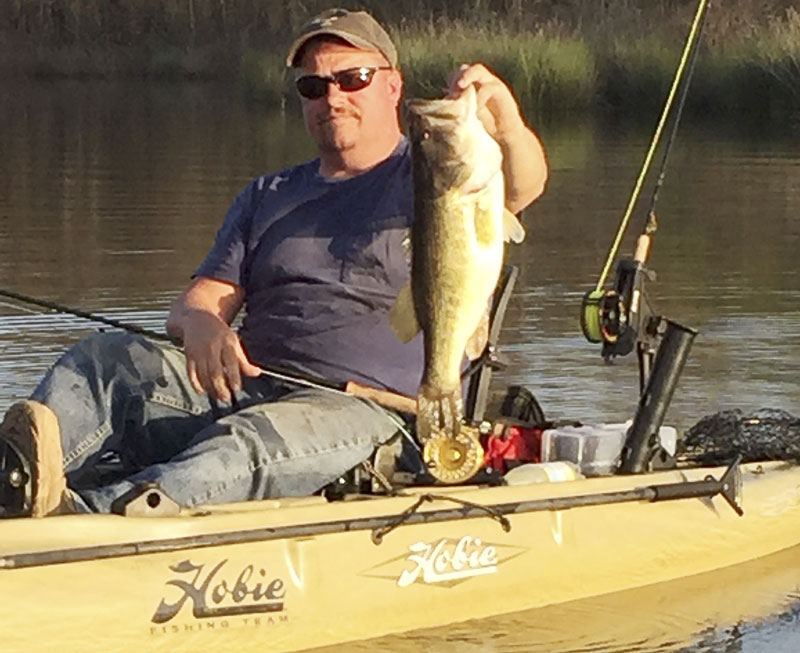 Tips for getting the most out of your fall bass outings

Something about falling leaves and fall bass fishing just naturally goes hand-in-hand. It’s a great time to pick up a baitcasting rod armed with just about anything in your arsenal and start chunking.

Aside from the great fall fishing that’s available across both Carolinas, sitting alone in your kayak on some forgotten stretch of river or the back of a secluded cove and taking in the scenery and solitude is simply good for the soul.

Obviously, some places are better suited for fall bass fishing, and kayak fisherman know that any roadway access in the back end of a creek is a great place to throw in a kayak. When you do, there are several things to keep in mind, in no certain order.

You know he’s there, and somehow, he knows that you know it, too. That fish is not going to rocket out of his hideaway and hit a topwater lure or a Fluke. Keep an old-school, jig-and-craw in black, brown or dark blue tied on for just such an event. Give him plenty of space, but put that bait deep in his living room and make him choose to eat it.

Fall bass love freshwater inflows. Maybe the lake is turning over somewhere out on the main lake, or maybe it’s just the current that instinctively means food. Barring flooding conditions, water inflows are a great place to throw blade baits: spinnerbaits, in-line spinners, ponyheads, etc. Some anglers refer to these as ditches, but most will have some kind of water entering the back. It’s hard to beat white for a color in this situation.

The backs of creeks, coves and even the banks of a slow-moving river are typically lined with some type of wooden cover. Bass love blowdowns year-round, but especially in the fall when the end of a tree sticking out in the water offers a great ambush point to ambush baitfish.

Bass can be on, under or simply around wooden cover, depending on their mood. Start working the area with an weightless, weedless soft plastic like a Fluke or floating worm to pick off bass that may be holding high in the water column. Next, work the sides of the blowdown or brush pile with a shallow- to medium-diving crankbait.

Be sure to make contact with the wood, then pause the crankbait and let it float up before continuing your retrieve. A jig-and-craw, Texas-rigged worm or other weighted bait, preferably weedless, can be used to work the bottom of the cover.

In a typical kayaking throw-and-go scenario, there’s a temptation to forego the electronics on the yak and only fish what you can see. This can be a big mistake, especially when the presence of baitfish will coincide with fish.

Kayak anglers may not even notice the fish as bass will run up into skinny water at times and charge back out to attack baitfish.

Electronics will not only alert you to structure that may not be visible on the surface, but also if baitfish are holding further back into the creek run or cove.

Pay particular attention to changes in water temperature. This can go both ways. If the weather has been unseasonably hot, water inflows or shaded areas may offer cooler water, as noted on the temperature gauge. On the other hand, note any warmer areas if a cold snap has been the norm for a few days.

When in doubt, choose natural shad colors. As space is limited, there isn’t a big need to carry a multitude of color choices in your kayak, assuming water colors maintain the normal clear or only slightly stained during the fall. Bass will be keying on baitfish anyway, so it’s best to match the hatch with baitfish-imitating colors.

Size matters. One of the chief complaints that kayak anglers have about fishing fall baitfish patterns is that the bass are feeding on bait that is smaller than what you have tied on. Remedy this by using 3-inch crankbaits instead or 4- and 5-inch models.

Smaller jigs and plastics can also be the norm. It’s very common to paddle up on a school of baitfish when quietly stalking the back stretches, so pay attention not only to how the bait is behaving, but also at the size of the bait and whether is threadfin shad, gizzard shad, herring, or some other type of prey species.

On a final note, stealth is your friend when kayak-fishing for bass in water less than 15 feet deep. Try to avoid any kind of paddle slap, banging tackle boxes and gear around or any other noise that will spook fish.

HOW —  Topwater fishing for bass is the name of the game. Don’t be afraid to go big.

INSIDER TIP — Largemouth Bass in Lake Phelps have been managed under trophy bass regulations, with a minimum size limit of 14 inches and a protective slot limit between 16 and 20 inches.

HOW — Safety pin and in-line spinnerbaits are a favorite go-to bait in the fall. Fish moving water at the upper and lower end of large pools for the best action.

INSIDER TIP — The Broad remains an untapped public smallmouth fishery because so much of the access to the river is private. A little homework getting permissions and finding access will pay off. 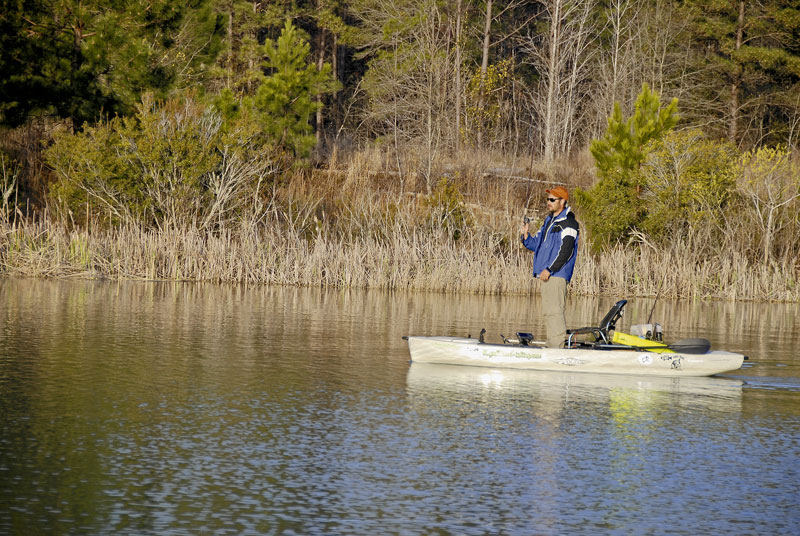 The answer is not so simple and boils down to a matter of preference. On one hand, standing makes it easier to see activity on the surface in front or away from the kayak. Standing also makes it easier to make longer and more-accurate casts. Finally, many bass anglers are simply accustomed to standing while casting because they’ve always fished that way from a powerboat.

The downside is it takes a wider, usually heavier boat to stand in comfortably and safely. There’s nothing worse that concentrating on maintaining balance to stand rather than on fishing. A big downside is that propelling the boat is more difficult from a standing position. It’s impossible from a pedal kayak, and you have to use only one end of the paddle to scull along, with reduced boat control, to paddle standing up.

There’s no right or wrong answer. In most cases, anglers like the ability to stand to fish in certain situations and remain seated the remainder of the time. Casting from a seated position also requires some skill refinement. If the angler stores rods vertically in a carry crate behind the seat, most casting will be done sidearm.

If you’re having trouble making up your mind, you might want to do so before next month, as there can be a considerable range in temperature between early November and late December for an unplanned swim.

Early Canada goose season opens Sept. 1, 2021 in both Carolinas, and the early season offers many advantages over the late seasons. […]

Dove hunting preview with Carolina ALL OUT

This video from Carolina ALL OUT will get hunters ready for the 2021 dove hunting season. […]

About Phillip Gentry 764 Articles
Phillip Gentry of Greenville, S.C., is host of “Upstate Outdoors,” a weekly radio show that can be heard on Saturdays at noon on WORD 106.3 FM.