After nearly 30 years in the archery industry, I’ve had the pleasure of shooting thousands of bows of nearly every make and model: compounds, crossbows and even traditional bows. So it’s rare these days that I am surprised by how well a particular bow shoots.

A few months ago, my buddy, Billy, called to tell me that after shooting a mutual friend’s Black Widow recurve bow, he immediately drove 12 hours to the factory in Missouri to buy one. He excitedly told me how he was able to shoot every bow on the wall at the factory and bought the one he shot best. It’s a takedown recurve bow on which he spent more than $1000.

Billy lives about three hours away, so when he drove down to purchase a Garmin sight for his Mathews bow, I asked him to bring the recurve so I could try it out. When I released the first arrow, I was blown away. The arrow shot into the 12-ring of the target from a distance of 20 yards, and my next two arrows did the same. There was absolutely no hand shock, and the bow was silent. The arrow flight was perfect, and the bow would even shoot a bare arrow shaft perfectly straight. 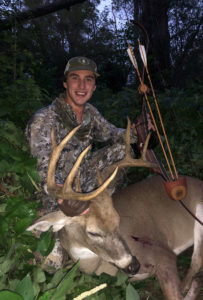 Over the years, I had heard about Black Widow custom bows, but I had never seen one in person. These folks have quietly been building traditional bows of unbelievable quality since 1957. Let me say they are the finest traditional bows I’ve ever shot.

I recently spoke with Roger Fulton, one of the owners of Black Widow, about the history of his company and what makes its bows different from other custom bows. Black Widow opened in 1957 as Wilson Brothers Bows; Ken Beck bought the company and changed the name to Black Widow Custom Bows.

The current owners — Fulton, Toby Esseck and John Clayman — bought the company in 2005; they continue to produce what I consider the finest recurves and longbows on the market.  Although they have a few bows in stock from time to time, the vast majority are custom-built to order. They offer several models of recurves and longbows to fit the wants and needs of any hunter.

Many different woods are available, including exotics such as Honduras Rosewood, Tiger Myrtle and Bocote. Custom options such as laser-engraved bamboo overlays, spliced veneers and snakeskin overlays are available. Several grips are available, depending on your shooting style.

I asked Fulton what makes their bows feel and shoot so differently from other traditional bows. The model I shot and subsequently ordered for myself was the PCHII 58-inch takedown recurve. He pointed out that, unlike with other takedown bows, whose limbs screw into the front of the handle, Black Widow attaches the limbs to the back of the handle.

This offers several advantages when it comes to accuracy and shootability. First, it places the grip forward of the limbs, leading to less grip torque, less string angle and higher brace heights. Although this makes the bow much more difficult to build, the advantages it offers the shooter are well worth the effort. Second, Black Widow offers four different limb lengths. This allows them to optimize the limb length to the shooter’s draw length, making for a much better shooting experience. The longer limb and shorter handle design of Black Widows leads to less stacking, less finger pinch and a smoother draw and shot.

Black Widow bow limbs are built different from most manufacturers in that they are laminated specifically to closely match the desired draw weight of the bow. Black Widow has kept meticulous records since 2003 of laminations for all four limb lengths it offers. This allows the company to build their limbs so that they require less sanding and material removal to reach the desired specifications, leading to more-consistent, better-shooting limbs. They also pay huge attention to detail, down to the way they seal their bows. The frosted finish prevents glare and looks great, while protecting the wood underneath. Black Widow also offers a complete selection of arrows, accessories, and traditional broadheads.

Specks in South Carolina’s Lowcountry waters are a real treat throughout the month of November. […]

Tailor your duck decoys, calls, as cold weather arrives in the Carolinas

Anglers who hang up their fishing gear when the cold weather of late fall/early winter arrives are missing out on some of the best trout fishing of the year. […]

About Sammy Romano 40 Articles
Sammy Romano is a lifelong hunter who has worked in the archery industry for more than 24 years. His expertise includes compounds and crossbows. He can be reached at samboka31@aol.com.