Feeding them now will pay off this fall

As summer arrives, it’s easy to get distracted by the beach, sun, fishing and other warm-season activities.

Deer season is several months out. But a diehard hunter can benefit from preseason preparedness to make their fall more productive. May is a perfect time to scout out fields for upcoming food banks. And there’s no better place to check out the countryside than in the comfort of cool air conditioning with a hunter’s play list sounding off in the background.

Many hunters rely on corn piles and feeders to bring their four-legged targets into the strike zone. And others spend countless hours producing food plots. But it will be hard to compete with local farmers who are generally cultivating hundreds of acres of cropland full of tall corn, juicy soybeans and tasty peanuts. Certainly, several acres of food plots and big, fat corn piles will have a positive impact on a hunter’s success. But deer and other wildlife will know exactly where the farmer is making his bread.

Crops such as soybeans and peanuts are instantly attractive to wildlife. Corn will not be attractive until late summer and early fall. By then, it has developed a sweet, tasty aroma. Deer and other wildlife will feast in these croplands on a daily basis as soon as they become palatable. With soybeans and peanuts, the new, tender shoots are like ice cream for deer, packed with nutrition. Deer will incorporate these food banks into their daily travels. And they will often stay very close to these fields for the majority of the summer and at the beginning of hunting season.

Deer are already looking for their favorite grazing spots

In late August when corn becomes palatable, deer will incorporate these fields into their daily feeding schedules as well. Even when corn is harvested around Labor Day, the harvester routinely scatters a portion of grain onto the ground. This provides a significant food source for deer and other wildlife species during the fall.

Agriculture fields provide a significant food source for deer and other wildlife throughout the year. And by May, all of these fields will be in production. A quick drive through an area will help hunters understand where their deer herd will be spending much of the summer and fall. And hunters with the option of hunting near these fields can find a good place to set up long before the season arrives.

Hunters can always find useful preparations throughout the year  to make their fall season more productive.

With turkey season almost over and hunters having thinned out the gobblers, it’s time to get that spring food plot in the dirt. That is if it’s not already planted and growing well. Iron clay cowpeas are one of the best warm-season forages available to supplement a deer’s diet.

Spring and early summer food plots are quite important for the deer herd, really more important than fall plots. During the spring and early summer, bucks are growing antlers, does are lactating and fawns are growing a few pounds per week. Deer need prime forage to fuel their biological needs. Iron clay cowpeas are both high in protein — 20- to 30-percent crude protein — very palatable and especially attractive to deer and other wildlife.

Iron clay cowpeas are native to the arid region of east Africa and are drought-tolerant. That makes them a perfect plant to put in the dirt. Especially late in the planting season in the Carolinas when the sun is shining hot and bright. When planted in moist soils with a pH of 6.0 or above, cowpeas will grow vigorously and provide instant forage.

Cowpeas can be both broadcast at 80 pounds per acre or drilled at half that rate. Soil should be broken up well, and all seeds need to be covered up by a shallow lens of soil for the best germination rates. Just as with any other legume, cowpeas don’t need heavy inputs of nitrogen for planting or maintenance. But cowpeas will require heavy supplements of potassium and phosphorus for optimum growth.

Sulfur is the 16th element on the periodic chart, with 16 protons inside the nucleus. Along with nitrogen, potassium, phosphorus, calcium and magnesium, sulfur carries an important role in the growth and yield potential in plants. It may not be highlighted in planting guidelines for a particular crop. But sulfur is the fourth most-needed nutrient, and it is needed in high quantities. 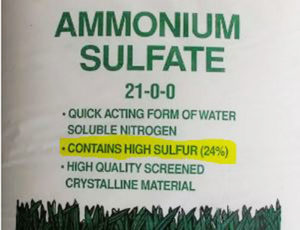 Sulfur is contained in many of named fertilizers, but is often overlooked as a major component of the nutrient package. Potassium sulfate, regular super phosphate, and ammonium sulfate are used very frequently for their inputs of potassium, phosphate, and nitrogen to the soil. But these three commonly-used fertilizers are high in sulfur, providing from 12- to 24-percent sulfur in a readily soluble form.

Sulfur is important to plants in more ways than one. Sulfur plays an important role in photosynthesis, nitrogen fixation, disease resistance, protein synthesis, enzyme and vitamin production and seed formation — to name a few. When a sulfur deficiency is present, leaves will yellow, beginning with the younger leaves. Then followed later by the older leaves.

Land managers should always use sulfur-containing fertilizers when making fertilization decisions early in the process. But if sulfur deficiency symptoms become apparent, calcium sulfate, aka gypsum, can be added to capture sulfur in the soil and offset detriments.

An upstate deer hunter, 70-year-old Robert Morgan of Taylors, S.C., died this past weekend while preparing his stand for deer hunting season. […]

About Jeff Burleson 1257 Articles
Jeff Burleson is a native of Lumberton, N.C., who lives in Myrtle Beach, S.C. He graduated from N.C. State University with a degree in fisheries and wildlife sciences and is a certified biologist and professional forester for Southern Palmetto Environmental Consulting.