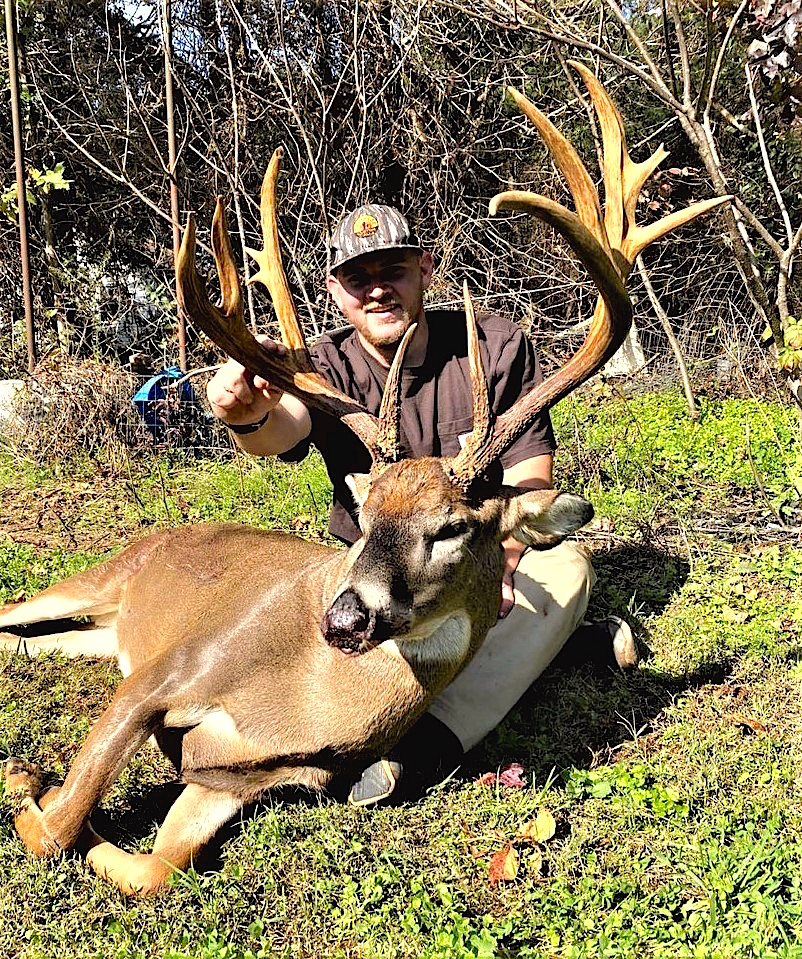 Hunter Pegg of Oak Ridge, N.C. killed a 14-point buck that green-scored 182 4/8 gross Boone-and-Crockett inches in Guilford County. He shot the buck on Nov. 14, the first day of the state’s Central Zone rifle season. It ended his years-long quest for the buck he nicknamed Goliath.

After that 2019 encounter, the deer seemed to disappear.

“I had no pattern of seeing him on my trail cameras,” he said. “He randomly showed up and would be gone for weeks. This year, I started wondering if he’d been hit by a car. I didn’t have a daylight picture of him the last four years.”

Pegg hunted early that morning with no luck, left the woods for a breakfast biscuit, and was sitting in his kitchen at 9 a.m. when one of his wireless trail cameras sent him an image of Goliath. The 14-point buck was at a nearby corn pile that Pegg had sweetened with Wright Whitetail Mineral Supplements and Happy Herd Nutrition.

At first, Pegg just felt relieved to know Goliath was still alive. But, with the deer so close to his house, the hunter formed a plan to intercept the buck from where it was likely headed.

Pegg took a chance, and it paid off

Wearing khaki pants, tennis shoes, and a light camouflage jacket sprayed with Mitchell’s Dead End Odor Zone, he jumped in his truck. His CVA Apex rifle with a 7mm-08 barrel and Leupold 3×9/40 scope rested against the seat.

“To get in front of him near his bedding area, I needed to circle where he couldn’t see me. But this was going to be a Hail Mary. I was either going to kill him or spook him,” he said.

Pegg circled on a path until he rounded a corner. He saw the buck’s backside go behind a tree 65 yards ahead.

“I saw his rear end and antlers going through a deadfall into some pines knocked down by a storm,” he said. “He was about 70 yards from the corn pile.”

The wind was perfect, blowing from the deer toward the hunter.

“He was walking slow. And I thought about stopping him (with a grunt call) but decided I might spook him,” he said.

The hunter focused on the deer’s shoulder in his scope and squeezed the trigger. It was 9:30 a.m.

“Goliath ran toward the thicket,” he said. “Before I realized what happened, instincts kicked in and I was running too. I didn’t want to lose sight of him.”

But the deer dropped out of sight.

A second or two passed before Pegg saw wavering antlers as the deer stumbled and collapsed 40 yards away.

Pegg, whose brother Tory holds the state record for non-typical archery bucks, expects to take Goliath’s mount to the 2021 Dixie Deer Classic in the spring.

Congratulations to Pegg, who is now entered in our Bag-A-Buck contest, making him eligible for a number of great prizes. That includes the grand prize, a two-day, two-man hunt at Cherokee Run Hunting Lodge. Click here to view the Bag-A-Buck gallery or to enter the contest yourself.

I managed to get another nice buck for the second year in a row. I first came across this Duplin County deer back in mid-October when I put  a trail camera out on a piece […]

I’ve watched this deer for the last three years, since he was a 4-pointer. The first time I saw this buck in person he came in within 5 yards of my stand and when I […]

John Johnston of Spartanburg, S.C. killed a 10-point trophy buck that had a huge drop tine on Oct. 26. The buck has been green-scored at 145 inches. […]