Fishermen try their luck for king mackerel from almost every pier along the North Carolina coast. On Oak Island, the meat of the pier king season runs from roughly the first of May to the end of October.

Oak Island’s piers enjoy a reputation as king mackerel magnets. It is well known throughout south Atlantic states. Typically, this area sees a spring run, a run or maybe two during the summer and then a fall run. Anglers catch the biggest kings during the spring runs, but they have decked more citation (30-pound) kings during the fall. In several years, piers have reported more than 200 fish at each pier.

The record pier kings all surpass 50 pounds. The heaviest is a 53-pound, 6-ounce king that Bo Crump caught at Ocean Crest Pier on May 7, 1998. Chuck Huthmacher caught the 50-pound king that is the record for Oak Island Pier, then called the Yaupon Beach Pier, on April 15, 2002. Long Beach Pier was removed in 2006, so Kathy Davis’ pier record of 53 pounds, 3 ounces from April 27, 1991, won’t be broken. Davis also holds the Women’s IGFA 8 KG class record for that king.

In the early years, the U.S. Open King Mackerel Tournament also had a pier division. But because of logistics issues, organizers cancelled this event.

Kings may show up at any time, but the numbers are usually the highest in the fall when bait is present all along the beach.

Pier fishermen use two rods. One is an anchor line to position live baits where they won’t tangle. The other is to fight the fish. Kings usually hit and run offshore when they feel the hooks. The angler has to wear the fish down and then lead it back to the pier, through other fishing lines, to where it can be gaffed and hoisted to the pier. Catching a king from a pier is exhilarating and intense. Anglers have no time to relax, and multiple opportunities for something to go wrong. 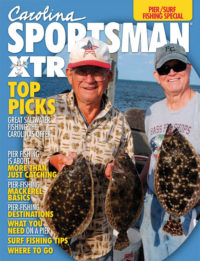 October is a special month for many of North Carolina’s fisheries, and none more so than the Outer Banks’ adult red drum stampede. Pier fishermen will get the first taste of reds longer than 40 [...]

By November, many anglers have stored their fishing gear and won’t take it out until the spring, opting for hunting, football or cozying up by the fire drinking hot chocolate, but this is a great [...]

Fishermen try their luck for king mackerel from almost every pier along the North Carolina coast. On Oak Island, the meat of the pier king season runs from roughly the first of May to the [...]

Pier fishing: It’s about much more than catching fish

Fishing piers offer many advantages to anglers over fishing from the beaches or from boats. But for most pier anglers, it's about much more than just catching fish.

Pier fishing is one of South Carolina’s oldest angling traditions, and July has always been a great month for catching fish from these structures. With the water temperature averaging a balmy 83 degrees, fish like [...]

Pier fishing requires specialized tools, some of which are provided by each pier operator. One of the most important, according to Mount Pleasant’s Jerry Grenier, is a pier net.

When it comes to inshore fishing in South Carolina, the redfish is king. They’re aggressive feeders willing to take numerous baits, and hard fighters, especially on light tackle.

The inshore slam – catching a flounder, redfish and speckled trout on the same trip – is not as easy task any time. Joe Dennis, a fishing guide from Bonneau, feels like October and November [...]

Speckled trout are a favorite target for many saltwater fishermen throughout the Carolinas. Fairly adaptable, they can be found from the nearshore ocean through the marshes and rivers to brackish water and sometimes into waters [...]

While plenty of surf fishermen catch sharks while targeting other species, a group of Lowcountry anglers from the Requiem Fishing Team targets sharks — big ones — and Edisto is one of their choice locations [...]

The Spanish mackerel have showed up a little earlier than normal this year around Grand Strand piers, and anglers are catching them using three different methods. Angler Matthew Hearn of Murrells Inlet said the bite [...]