November plantings can provide needed food for deer,not to mention a place to ambush late-season whitetails

Deer season across both Carolinas is open this month, with all 150 counties open for pulling the trigger. Not to mention, the rut is on fire, with the peak of breeding happening across both states.

While November isn’t exactly the planned time to add a new food plot, it surely isn’t a bad time, either. Establishing a new food source in November doesn’t have to be an uphill battle. And in the right places, it could be an excellent option to establish a preferred food source, even for landowners showing up late to the party.

Deer and other wildlife rely on locating consistent food sources throughout the year. Spring and summer foods are typically very abundant, giving deer a long list of food options. As the fall arrives and many summer foods become unavailable, both soft and hard mast mature, providing deer with a tasty and nutritional option. But fall foods eventually reach a low-supply level. And deer go on the prowl for a solid food source.

Luckily, deer get the opportunity to feast on agriculture crops. While most of the corn and peanut fields have been reduced to scattered residue, massive soybean fields are typically mature and being harvested, leaving some highly nutritious and palatable legumes to eat. Soon, these crop fields will be harvested and left void of much of the residue left to sustain wildlife for the winter.

Add to the menu

As fall foods begin to diminish, a new food source coming online is always welcomed and often relished. The combination of an energy-depleting breeding season and cooler weather fires up hunger pangs in deer. And a late-fall food plot can be an excellent idea to get deer and other wildlife committed to an area.

November is also at the end of the “official” growing season. But anybody who understands the weather in the Carolinas knows that warm days are just around the corner from cold days. And soil temperatures are typically much warmer than air temperatures. Unpredictable weather, with equal amounts of warm and cooler days is always the norm, especially in the Piedmont and coastal plain areas.

Some planting options are accustomed to cooler soil and air temperatures that can be good options for a November planting. The big killers are heavy frosts and freezes in November that are possible. But they aren’t a reason to avoid a November planting effort, either.

November plantings for wildlife must produce soon after planting without any maturation dates needed. November plantings can be singular crops or mixtures. For late-fall plantings, a mixture of seeds would be preferred to take advantage of growth rates and forage availability characteristics of each contributing seed variety. 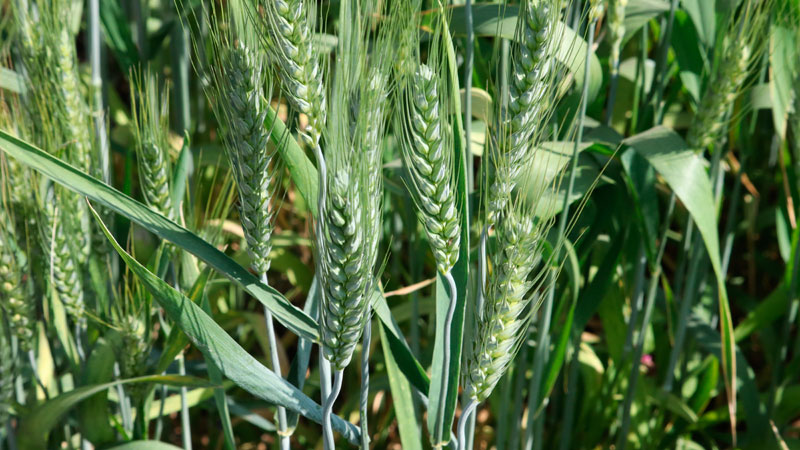 All November plantings should include small-grain, annual cereal grains at a minimum due to the quick establishment, rapid forage availability, and cold-weather tolerance. Winter wheat, rye, oats and triticale can sprout rapidly and provide a quick food source for deer and turkey over winter. For the best results, 20 to 40 pounds of nitrogen per acre should be added to kick-start growth, along with other fertilizer requirements.

In addition to winter small grains, some legume plantings can be mixed into the planting regime to produce added benefits to the late fall plot. Crimson clover and hairy vetch are the two best winter legumes to incorporate into a late-fall mixture. Crimson clover is typically planted in the spring but can grow vigorously during mild conditions that are often associated with fall in the Carolinas. Hairy vetch is more of a climbing vine and is much more cold-hearty than crimson clover, but it will provide forage through the winter and possibly into the spring if allowed to grow.

Cereal grain and legume mixtures of these types are made up of small seeds that can be either broadcast or drilled on a prepared seedbed. There is not a perfect mixture for a fall plot of this nature, but a good overall seed mix would be 70 pounds of rye and/or wheat with an additional 10 to 15 pounds of crimson clover with some hairy vetch mixed in, if broadcasting the seed. For the best results, seeds should be planted in moist soil or right before a rain.

The winter is approaching, and deer are looking hard to find a consistent food source. Even though most cool-season plantings should have been planted 6 to 8 weeks ago, November is still not too late to establish a food plot with immediate availability. Cereal and legume mixtures can grow fast and provide a solid food source for deer. In fact, a late plot filled with small cereal grain and legumes can erupt very quickly providing an instant food source that can be an excellent place to set up for the rest of the season.

North Carolina hunters harvested 168,427 deer during the 2021-22 hunting season according to the NCWRC deer harvest summary. […]

About Jeff Burleson 1283 Articles
Jeff Burleson is a native of Lumberton, N.C., who lives in Myrtle Beach, S.C. He graduated from N.C. State University with a degree in fisheries and wildlife sciences and is a certified biologist and professional forester for Southern Palmetto Environmental Consulting.