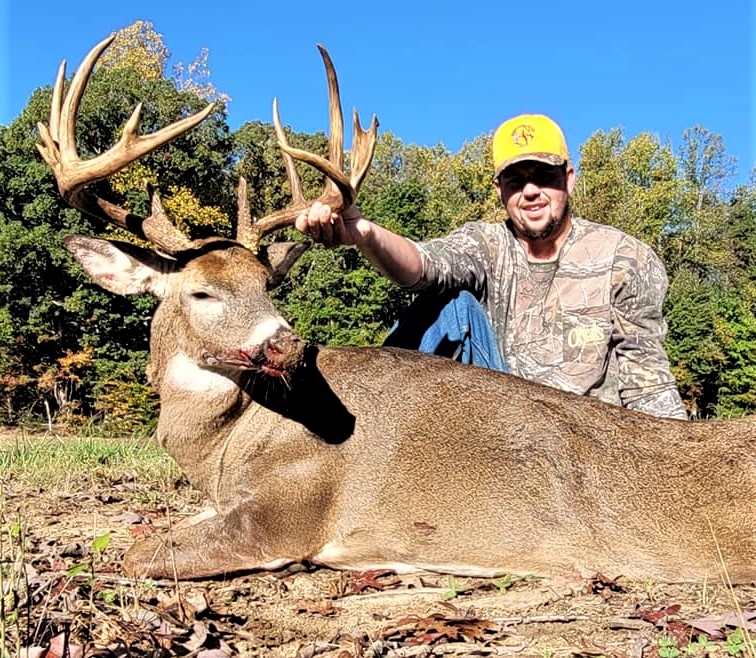 Mark Winfree of Stokesdale, N.C. used a smokeless-powder muzzleloader rifle to down a 13-point whitetail buck Oct. 30, 2021 in Rockingham County.

The deer’s antler rack has been scored as a typical because of just three small abnormal points (including a crab-claw at the end of its left main beam). The total inches of its headgear measured 159 6/8 inches.

Winfree was hunting from a ground blind in a cutover where he’d used a tractor to push down underbrush for shooting lanes.

“I’d never seen him before, even though I’d run trail cameras in the lanes since August,” said Winfree. “But the property where I killed (the deer) has been well-managed for 20 years.”

Winfree figured the nearness of the mating season had encouraged bucks to roam and look for does, perhaps driving the whitetail from another area

“The rut was starting but not wide open,” he said.

Oct. 30 was the first day of the two-week muzzle-loader season at the state’s Central N.C. deer region (15 counties including Rockingham) that ends November 12.

“I’d bow hunted that area pretty regularly but not at that blind,” Winfree said. “It was my first sit at the blind.”

Winfree shot the buck at 60 yards

The hunter had scattered shell corn on the ground 60 yards from his hiding place.

“I didn’t put out any deer scent, but the blind was well-camouflaged with brush,” he said.

He put the crosshairs of his scope on the buck’s shoulder and pulled the trigger.

“The deer didn’t go anywhere,” he said. “(The bullet) hit high on the shoulder and he dropped.”

The buck weighed an estimated 200 pounds.

Winfree likes smokeless powder rifles because of their range and ease of cleaning.

His .45-caliber firearm held 58 grains of propellant with a Burris adjustable 10-power scope on top.

“This was my second-best buck,” he said. “My best came from Ohio.”