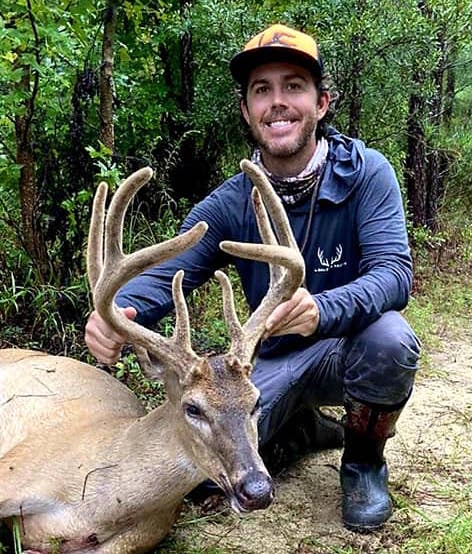 Thatcher Hurt of West Columbia, S.C. killed an Allendale County trophy 8-point buck on Aug. 21, 2021 with a 105-yard shot from his Savage 6.5 Creedmoor. The buck was in full velvet, and the product of a hunt that Hurt will never forget.

And it almost didn’t work out for him. He was hunting with his friend Jerrod Wingard, on Wingard’s land. Storms were brewing that evening, which Hurt said made it feel nice outside.

“Jerrod called and invited me to come hunt with him. When he calls, you go. I got in the stand around 6:45 p.m. while the storms were brewing. The storm blowing in made for a comfortable sit, but also made it feel later than it was,” said Hurt.

He saw activity right away.

“When I got to the stand, there were already does down the road to the right, and does and yearlings to the left in the open food plot. Does came and went. And finally, two nice basket rack 8-pointers came out to the right,” he said.

But Hurt wasn’t after a basket rack. He was looking for a bonafide shooter. The two small bucks walked back into the woods. And pretty soon, his bonafide shooter showed up on a road bed between 10-year-old pines.

“A little bit later, I saw one of the small 8-pointers come out and I reached for my binoculars. I looked down the road and there were two now. But it was not his little brother. It was a tall 8-pointer. I knew immediately it was a shooter,” he said.

Weather gets even worse

But Hurt had a problem. The smaller deer was standing directly in his way of getting a clean shot at the trophy 8-point buck. He continued watching, and began to get nervous.

“The small 8-pointer was standing in the way, which did not help my nerves. Finally, the little buck walked forward and the tall 8 was turned, about to walk back into the woods,” he said.

He took aim and pulled the trigger from his tower stand. He felt like he’d made a good shot. The weather took a turn for the worse, so he got out of the stand right away to take a look. With Wingard on his way to help search, Hurt didn’t see the deer, or any blood.

“I could find no blood and I began to worry. Jerrod got to me as fast as he could, and the search continued. Jerrod found a speck of blood. So we kept searching even harder. At that time, the bottom completely fell out and the thunder and lightning began,” he said.

With the weather turning dangerous and visibility too low to continue searching, the two hunters reluctantly left the woods. The storms lasted through the night. So early the next morning, they were back to continue the search.

“We got up early and went back to where we marked the blood. After about 30 minutes, we found the buck,” he said.

Hurt is now entered in our Bag-A-Buck contest. Click here to enter your buck in the Carolina Sportsman Bag-A-Buck contest. We’re giving away some great monthly prizes, as well as a Grand Prize that includes a Millennium M25 hang-on deer stand and a 2-man, 2-day hunt for deer and hogs at Cherokee Run Hunting Lodge in Chesterfield, S.C.