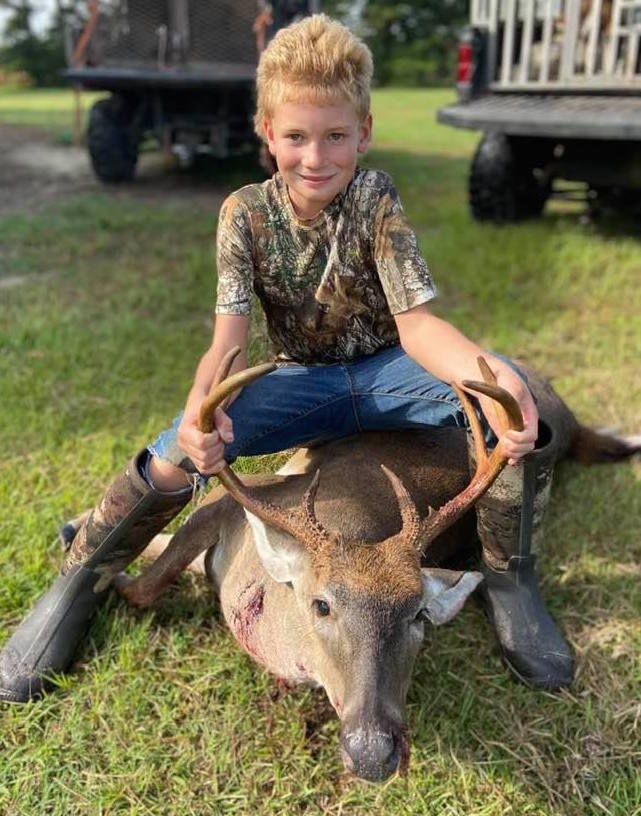 Owen Grubbs, 11-years-old from West Columbia, killed an Orangeburg County brute on Aug. 28, 2021. The 9-point trophy buck weighed 202 pounds, and was a surprise to the young hunter and his mom, who was standing with him on a dog drive.

Grubbs shot the buck with a TriStar 20-gauge shotgun. He had never seen photos of this buck, or seen it in the flesh until just before he pulled the trigger on the deer.

“My mom and I were sitting on a ditch that separates the woods and soybeans from a corn field. The dogs had been running, and other hunters had been shooting all morning. We knew we were in a good spot. The deer like to cross the ditch,” he said.

“My mom and I saw the deer coming toward us between the wood line and the ditch. His horns were shining as he was walking toward us. I could tell he had a big body, but couldn’t really tell how big his horns were,” he said.

The young hunter got his gun ready, and his mom told him to wait for the deer to cross the ditch before shooting.

Buck made it 75 yards before expiring

“When he crossed the ditch, he was about 40 yards away and was broadside to us. I aimed and shot three times. I saw hair flying off the deer when I shot. Then I saw him go back in the woods. I was so excited, I was shaking. Once I calmed down a little, mom and I walked to where we saw him cross the ditch. We didn’t notice any blood,” he said.

One of the dog drivers showed up to help them look for the buck, which had run about 75 yards toward one of the other hunters before falling to the ground for good.

“When I saw him laying on the ground, I couldn’t believe how big he was. My hunting buddies Tyler, Randy, Big Pensel, Tim, Stewart, Mike and Danny were there with me, giving me fist bumps and telling me how proud they were of me.

The hunt had special meaning for Grubbs. He loved hunting with his dad, who passed away before the 2020 deer hunting season. The young man said he could feel the presence of his dad on the hunt, and a red bird stayed near him the morning of the hunt, reminding him of his dad. The other men hunting on the drive had hunted with his dad for many years.

“My dad died on Jan. 28, 2020 of a ruptured brain aneurysm. Me and my dad were hunting buddies. I didn’t go much last year because it made me too sad. This was the first day that I had been this season, and I’m so glad I got to share this memory with my mom and all my hunting buddies. I can’t wait to get him mounted,” he said.

Grubbs is now entered in our Bag-A-Buck contest. Click here to enter your buck in the Carolina Sportsman Bag-A-Buck contest. We’re giving away some great monthly prizes, as well as a Grand Prize that includes a Millennium M25 hang-on deer stand and a 2-man, 2-day hunt for deer and hogs at Cherokee Run Hunting Lodge in Chesterfield, S.C.

Buck of a lifetime for Bonnie Wilbanks

Christopher Thomas of Georgetown, S.C. killed a 13-point buck on Oct. 17 during an afternoon hunt in Georgetown County. […]

Jamie Moore of Stokesdale, NC was hunting in Person County when he killed a trophy 12-point buck that’s been green-scored at 140 3/8 inches. […]