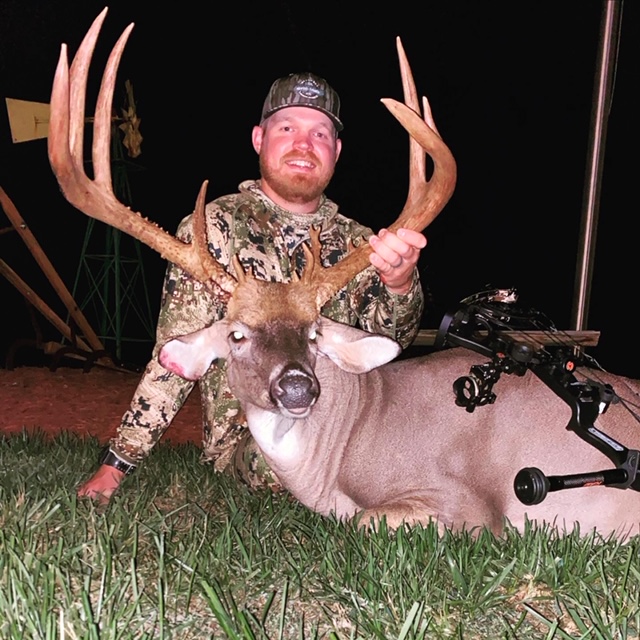 Cale Rogers stumbled onto a big buck last season while hunting another one. He turned his attention to the second one, and almost a year later, he finally won the battle.

Rogers, from Snow Camp, killed a big, main-frame 8-pointer on Friday, Sept. 18. The buck carried a handful of sticker points around the bases of his heavy horns. A preliminary scoring put the 208-pound animal at 155 7/8 inches.

“I hunted this deer last year, but I never could get on the same page with him,” he said. “It was the first year I ever hunted this piece of property. I had another buck I was hunting — then I got (trail-camera) pictures of him. The rest of the season, I had him (in photos) in daylight two times. But they were on days when I wasn’t there.

Rogers spotted the deer five days before shooting it

“This year, I started trying to feed him early so I could get him while he was still in his summer pattern. I saw him on Sunday after opening day (Sept. 13), and I drew back on him. But he had four smaller bucks with him and he was being real aggressive. He ran them off a corn pile, but it was too dark to shoot when he came back into the corn.”

The next week, Rogers waited until the remnants of rains from Hurricane Teddy had finished falling, going back into the woods the afternoon of Sept. 18.

“Another buck came in and was real skittish, and I saw a tree shaking in the bottom where the big buck had come from,” he said. “It was him rubbing a tree. He came in grunting. He didn’t run the other buck off, and he circled around and gave me a broadside shot.”

The buck collapsed after a short run

Rogers said the buck, shot through both lungs with a QAD Exodus broadhead from his Prime Logic CT3 bow, made it about 50 or 60 yards. Then it headed back in the bottom before collapsing.

“I was on an oak ridge where he was coming up out of a bottom, a thicket,” he said. “I knew the oaks would eventually start dropping. That’s where I’d gotten the first picture of him last year. I knew he’d make the transition from corn to acorns, and he’d be harder to kill once the acorns started dropping because there were so many trees. When I went in to look for him, I found acorns all over the ground.”

Rogers said he picked up one of the buck’s shed antlers last March. And from comparing last year’s trail-cam photos and the buck’s rack, he guessed the Alamance County trophy was about 10 or 12 inches larger.

“He added a lot of mass. He was a lot cleaner last year, no trash around the bases,” he said.

Congratulations to Rogers, who is now entered in our Bag-A-Buck contest, making him eligible for a number of great prizes, including the grand prize which includes a 2-day, two-man hunt at Cherokee Run Hunting Lodge. Click here to view the Bag-A-Buck gallery or to enter the contest yourself.

About Dan Kibler 846 Articles
Dan Kibler is managing editor of Carolina Sportsman Magazine. If every fish were a redfish and every big-game animal a wild turkey, he wouldn’t ever complain. His writing and photography skills have earned him numerous awards throughout his career.