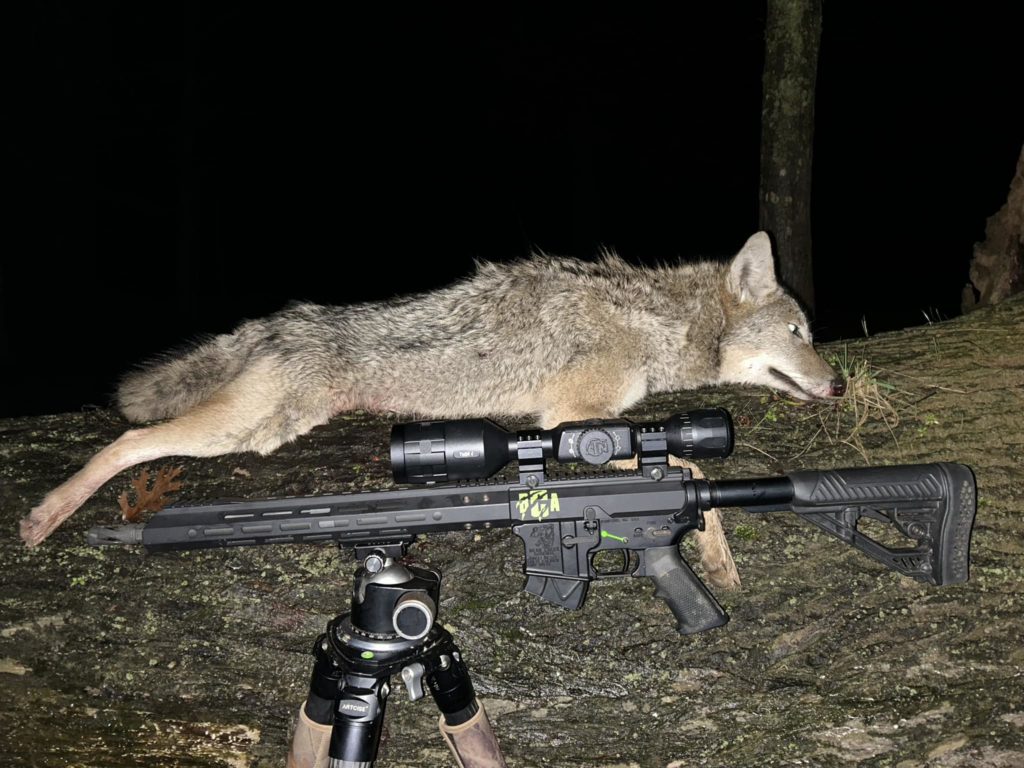 Now is the time to reset your favorite sounds on your e-caller as the coyote mating season is about to close in on predator hunters. Here is a list of the sounds you want programmed on your caller to be more successful in the next few months.

Every great conversation starts with a great opener. The opener sets the stage for what’s about to take place. So here are some suggestions to open your calling session correctly during the mating season. Female invitation or interrogation howls offer the greatest chance for success during the breeding season, as they will attract courting males as well as territorial females to your location. Opening with these calls give you a better chance of bringing in any coyote, as the threat level is pretty low.

Male invitation or interrogation calls will bring in competing males, but some females that are not ready to mate will not come to this opener. Male competition makes these calls great starters to mix in during this time frame. Lonely male or female calls are also a great starter to mix in as a lone coyote is more likely to be looked at as a non-threatening challenger. Rotate your openers each time out to find the one that coyotes respond to most in your area. Try multiple openers if you don’t get a response at first, moving more toward the deeper sounding calls. This may trigger a response from the older coyote that sometimes keep the subordinates from howling as much. Deeper howls are obvious in tone and can challenge alpha coyotes.

If you receive a non-threatening response or howl during mating season, you will want to move into some coyote inter-action sounds to convince that approaching coyote to come the rest of the way to your caller. Coyote whines and whimpers are a great lower level sound that will convince that coyote to come take a closer look. Mating ritual sounds also are great this time of year and will bring in territorial coyotes looking to keep competition out of their area. Coyote fight sounds are also a great sound this time of year as competition to breed is fierce and fights are common. Mix a few of these sounds in to make your set-up seem more realistic.

These are my favorite sounds as the mating season brings about the most vocal time of the year for the coyote. Any type of bark in response to your calls is a direct challenge to your presence. You must be ready to capitalize on this response and have a sound at your finger-tips on your e-caller remote. A challenge should immediately be met with a challenge. A bark should be met with barks. Any howl with barks included can be used to respond to any howl with barks included. Barks alone should be used if your competitor barks alone. A hunter should answer every challenge with a challenge of their own. If a challenger goes silent, they may be approaching fast so keep scanning for a coyote. If the challenger does not make an appearance, move closer keeping the wind in your favor and call again. Aggressive responses from a coyote should be met with slightly more aggression. Keep scanning, as this is when the most aggressive coyotes come in fast looking for a fight.

The above list of sounds provides countless combination possibilities that can be used in your sets this breeding season. The key is to have multiple sounds ready on your caller remote but also to not use every call in your arsenal in one hunt. Rotating your opening call allows you to use different calls in an area and sound like a new coyote moving into a territory. You will find that some calls become your go-to call and that is fine. The sound combinations are endless for you to experiment each time out. The next three months can be some of the best back and forth calling offered by any animal. Take advantage of this time of year by being prepared with the right sounds to call them close.

This small game rifle feels right, is deadly accurate, looks sharp, and is full of features. […]

Cottontail rabbits are the most common rabbits in North America, and are prized by small game hunters. […]

Using a shotgun is a great option when hunting coyotes for several reasons. […]

SCDNR finds missing hunter in distress thanks to phone technology