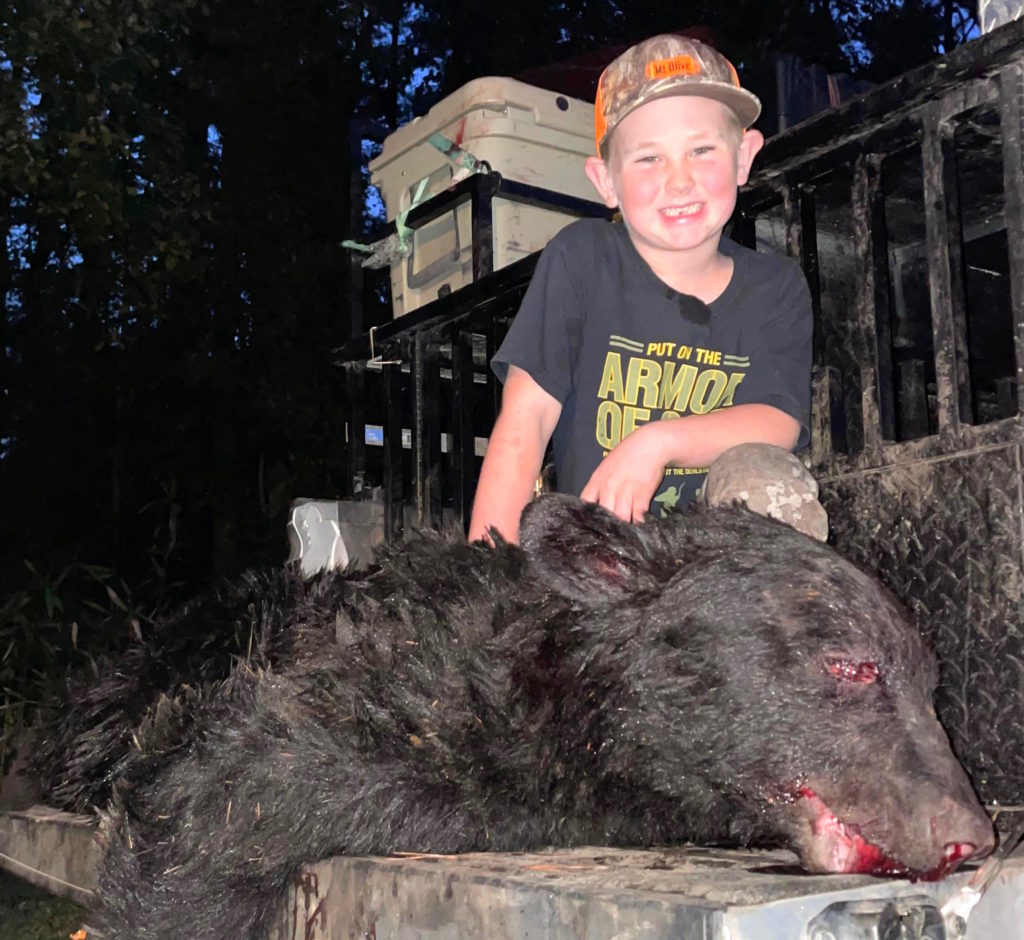 At the ripe old age of 5, the youngster already has several years of bear hunting experience, thanks to tagging along as an observer on numerous hunts with his dad and mom, since before he could even walk. So killing his own bear was a natural progression for him.

But the day didn’t start out the best. The usually reliable dogs hung up on a deer first thing, and it took a while to get them rounded back up. As if in apology, two of the dogs picked up the scent while still in the truck and led the pack until they treed the bear.

“After we had gotten the dogs back, we were easing down the road trying to put together a Plan B. And all of a sudden, my jump dog howled and bailed out of the truck,” said Quinn Hilbourn, Brenton’s dad. “I turned to look and my buddy’s dog was coming over the cab of his truck and went down the hood and hit the ground running.

“Once they sounded off on the trail, we let some pack dogs out and they went to them and joined the chase. The bear covered a lot of ground and they lost him for a while. But we sent some more dogs in and they found him and packed up on him, which pushed him up the tree.”

Time for the hunters to get dirty

“We got the truck as close as we could and hit the woods to get to the dogs and bear,” Hilbourn said. “It ended up being about 600 yards from the road. But most of it was pretty clear for that area. However, there was about 100 yards of crawling through several thickets on our hands and knees to reach where the bear had treed.”

Hilbourn said he had talked with the other members of the Flint Ridge Hunting Club earlier that morning. And all had agreed that if the right situation presented itself, they would let young Brenton take the shot.

The situation ended up being perfect. When he asked Brenton if he was ready, the young man didn’t waver and replied “yes.”

“I got him to a good spot and handed him my rifle,” Hilbourn said. “He braced against a tree and asked where to shoot him. I told him to shoot it in the head, like we had practiced.”

The young hunter said he was ready, took aim, took a deep breath, and pulled the trigger.

A mount of his first bear will commemorate the hunt

“The shot in the head killed the bear instantly,” said Hilbourn. “I was really proud of him and the other club members began hollering and congratulating him. He was smiling ear to ear.”

Although the bear isn’t huge at 246 pounds, Brenton’s mom Cori said you only get your first bear once, so they would be having it mounted. She also said when they are eating the bear’s meat, she will remind him that he supplied the family’s meal.

Brenton’s dad was already pretty sure he would always have a hunting partner, but there is no doubt after this. Young Brenton is a bit shy and wasn’t talking a lot about the hunt. But the smile permanently plastered on his face spoke volumes. He’s hooked and will be with his dad on every hunt possible from now on.

Here’s what you need to know to target black drum along the Carolinas’ coast in December. […]

NRhone Bag a Buck, Deer of the Year

About Jerry Dilsaver 1123 Articles
Jerry Dilsaver of Oak Island, N.C., a full-time freelance writer, is a columnist for Carolina Sportsman. He is a former SKA National Champion and USAA Angler of the Year.

Paddle up a buck; a kayak can put you in uncharted territory