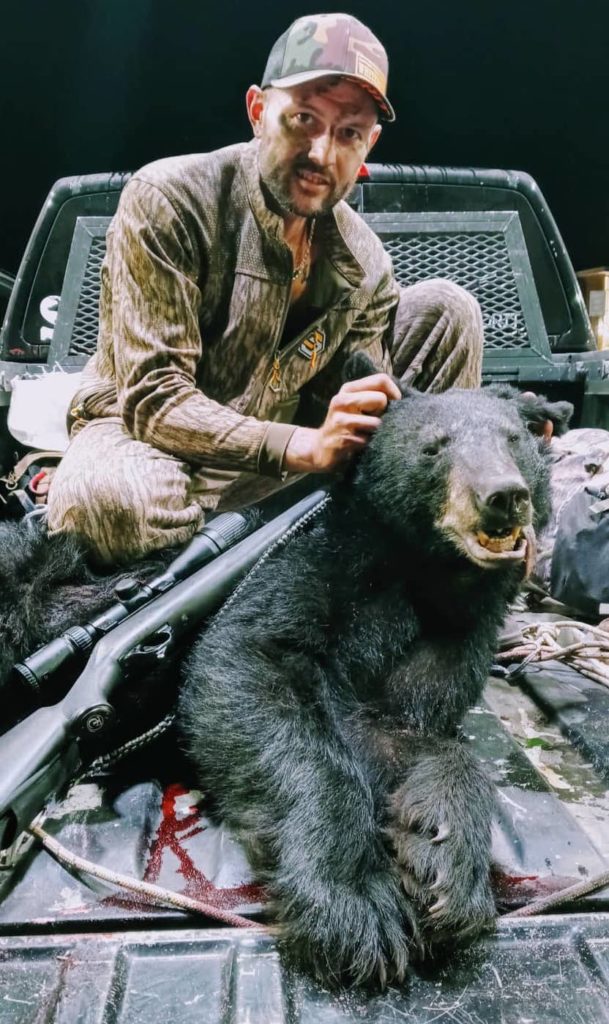 Sean Kearney killed his first ever bear on Oct. 23, 2021 in Horry County, S.C., thanks to a lot of help from fellow sportsman Jason Britt.

“I killed a 134-pound male black bear. With the help of Jason Britt, I was able to get the job done,” said Kearney, who shot the bear with a Thompson Center .50 muzzleloader.

He thought he’d missed out on his opportunity for a bear when he missed one shot the previous Monday, saw nothing during his hunt that Tuesday, then saw a bear far out of bow range on Wednesday. Then he heard the bear quota was met for that Game Zone, and assumed the season was over.

“I heard that the quota was met, but I didn’t listen to the full recording. So I thought bear season was over that night. Saturday morning, I thanked Jason for all his generosity on putting me in the right spots during that week. And his reply informed me that I had one more chance,” he said.

Kearney passed on a big buck while waiting for a bear

That day, a Saturday, bear season was to close at 11:59 p.m. Upon learning this, Kearney bought a new scope for his muzzleloader, sighted it in, cleaned his gun, and was in the stand around 3 p.m.

“I glassed a bear at about 1000 yards out. He then disappeared. At about 6:45, a nice buck came out. Jason told me to not hesitate if I saw a nice buck. I put him in my sights and watched him. I made the decision to let him walk because I was there for one purpose,” he said.

It was a wise move for the hunter.

“After about 5 minutes, the deer casually walked off and I happened to look to my left. And there was a bear, covering ground making my way. He came into 20 yards, and at that time I decided to make my shot,” he said.

Kearney pulled the trigger and the bear took off. It ran for about 20 yards, then crashed.

“It was over. I felt relief! On the last day in the last remaining minutes, I filled my tag. A huge shoutout to Jason Britt for making this happen. A once in a lifetime opportunity, and a whole week that I’ll never forget,” he said.

Beau is proudly sitting next to his 556-pound bear from Carteret County, N.C. He is pictured with his dad, brother, and friends! […]

About Brian Cope 2088 Articles
Brian Cope is the editor of CarolinaSportsman.com. He has won numerous awards for his writing, photography, and videography. He is a retired Air Force combat communications technician, and has a B.A. in English Literature from the University of South Carolina. You can reach him at brianc@sportsmannetwork.com.
Website