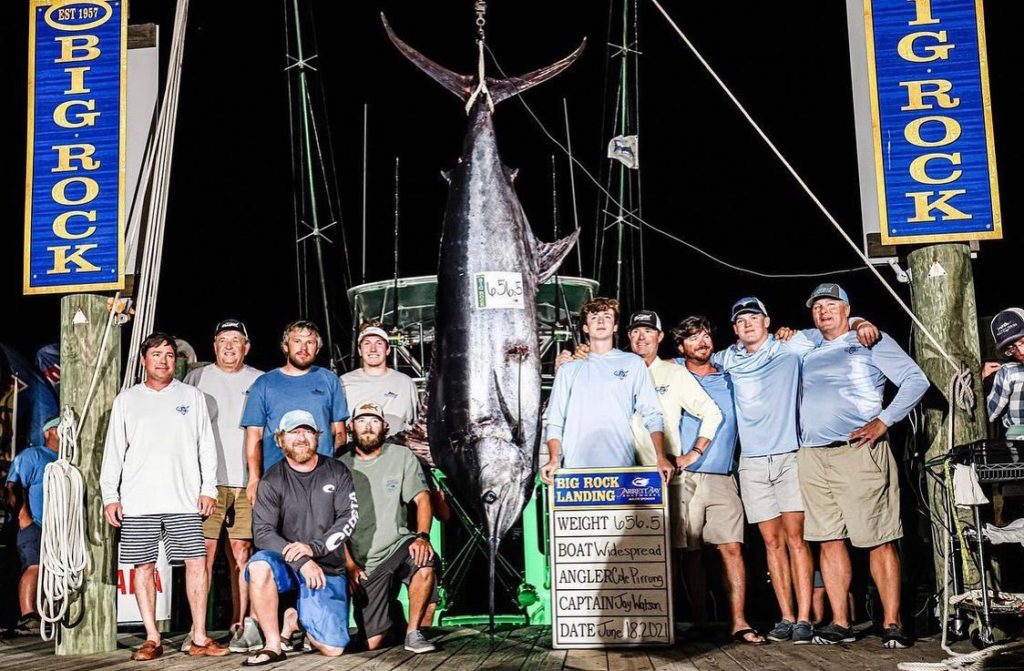 WIDESPREAD’s 656.5-pound blue marlin from Day 5 of the 2021 Big Rock Blue Marlin Tournament stayed atop the leaderboard after the final day. That gave WIDESPREAD first place in the Heaviest Marlin category, and more than $1.6 million.

NATURAL finished in second place with their 521.6-pound marlin, followed by OUTNUMBERED in third place with a 512.4 pounder.

In the Billfish Release category, WAVE PAVER took first place with a total of 925 points. ANITA JEAN was second with 925 points, followed by BILL COLLECTOR in third with 800 points.

In Heaviest Dolphin division, FIN PRINT took first place with a 48.3 mahi they caught on Day 4. WATERTIGHT’s 23.4-pounder landed them in second place. C-ESCAPE finished third with a 22.2-pound dolphin.

37 boats fished on the final day

For Heaviest Wahoo, REEL QUICK took top honors with a 66.1-pound wahoo they caught on Day 3. CATHERINE GRACE finished second and third, with a 25.3 and a 24-pounder.

BILL COLLECTOR took the top spot in the Heaviest Tuna category with a 52.3-pound tuna. They caught that fish on the first day of the event.

Only 37 boats were eligible to fish on the final day. The other 233 registered boats had already fished their allotted days. Three blue marlin were released on Day 6. SEA WOLF recorded the first release of the day, winning the Gregory Poole 1st Release award of $5000.

Click here for a complete breakdown of the results of the 2021 Big Rock Blue Marlin Tournament.

Carole Mongelli of Jacksonville, N.C. caught a black drum while fishing in the Pamlico River with family in September. […]

Matt and Jordan Hauser of Ocean Isle Beach, with a nice flounder caught on a live mullet in Tubbs Inlet on Sept. 4, 2022. […]

As fall weather eases into North Carolina’s coast, the king mackerel fishing is fast and furious. […]

About Brian Cope 2286 Articles
Brian Cope is the editor of Carolina Sportsman. He has won numerous awards for his writing, photography, and videography. He is a retired Air Force combat communications technician, and has a B.A. in English Literature from the University of South Carolina. You can reach him at brianc@sportsmannetwork.com.
Website