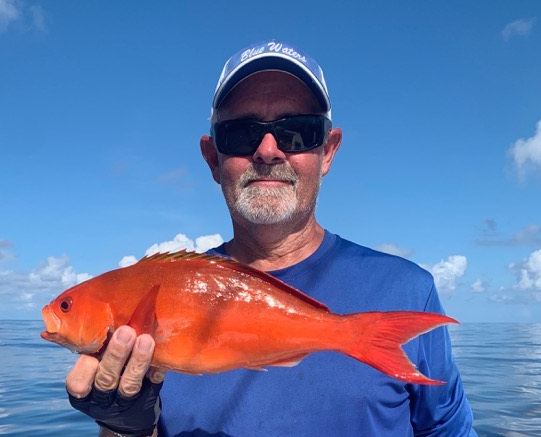 Offshore fish could be first entry of the species in N.C. record books

Craig Thompson of Southport, N.C. caught the new pending world record Atlantic creole while fishing out of St. James Marina near Southport on Sept. 1. The fish weighed 2.14 pounds, which is .34 pounds heavier than the current IGFA world record. Thompson caught the fish while on a trip with Capt. Hiroki Toma, Bob Timson, and Phil Moseley, all members of the St. James Fishing Club.

The band of anglers fish together often, and were trolling offshore in Toma’s boat, Matias. They’d decided to try some bottom fishing on the way in, and that’s when Thompson reeled in the record-breaking fish. Aside from being the pending world record, it’s also potentially North Carolina’s initial state record for the species.

“We knew the water was still pretty hot and the offshore fish would be scattered. But we wanted to go fishing,” said Thompson. “The weather and sea forecast was good, so we made a plan to head to the edge of the (Gulf) Stream and troll. We were hoping to pick up a few wahoo and maybe some blackfin tuna and dolphin. Our backup plan was to stop on the way back in and bottom fish if trolling either wasn’t good or was very good. This is a standard fishing plan with us, and we do it often.

Drift-fishing along the bottom produced the record Atlantic creole

“On that day, trolling wasn’t good,” he said. “We couldn’t get on a bite. After trolling for about 5 hours, we got our only bite and landed a nice wahoo. This spurred us to troll a little longer, but it just wasn’t happening. We were near the Steeples in about 200 feet of water with some good bottom showing on the scope. So we brought in the trolling spread and dropped to the bottom for grouper.”

They drifted along with live baits they’d caught earlier. And after two unsuccessful drifts, they began to wonder if this was a bad idea. But they decided to head back up current and try again.

“During that third drift, I had a strike that felt like a grouper at first. But its resistance slowed pretty quickly once away from the bottom,” Thompson said. “When I first saw it, I thought it might be a beeliner, but it was too dark red. It wasn’t a red snapper either. We checked the FishRules App and internet and no one could find a picture to identify it. Since it was about a foot and a half long and none of us could find it as a prohibited species, we made the decision to keep it. On the way in, one of the guys mentioned creole fish. And as soon as we saw the picture, we were sure that is what it was.”

Thompson declined to clean the fish right away and wrapped it in plastic to store overnight. He found the current world record is 1.8 pounds. This got him excited. His fish weighed 2.1 to 2.2 pounds on handheld digital scales. He called the International Game Fish Association (IGFA) the next morning. They encouraged him to submit a world record application.

Wildlife Bait and Tackle in Southport weighed the fish at 2.14 pounds on their certified scales. Thompson then took the fish to Ocean Isle Fishing Center, an IGFA-listed weigh station. Their scales also read 2.14 pounds.

Thompson caught the fish on a live cigar minnow on the bottom in 200 feet of water. He was using a 6-foot, 6-inch medium heavy Shimaon Trevala Jigging Rod and an Avet SX 6/4 reel spooled with 50-pound test Power Pro braided line. The rig was made from 100-pound test Ande monofilament and an inline circle hook.

Atlantic creole fish (Paranthias furcifer) are not common catches off the N.C. coast. They are more common in the tropical Atlantic and occasionally to Bermuda. Tar Heel fishermen have seen more and more species once considered tropical moving northward, especially in the unusually warm water this year. The arrival of creole fish could be similar to lionfish, which were rare only a few years ago but now dominate many reefs and wrecks.

About Jerry Dilsaver 1115 Articles
Jerry Dilsaver of Oak Island, N.C., a full-time freelance writer, is a columnist for Carolina Sportsman. He is a former SKA National Champion and USAA Angler of the Year.