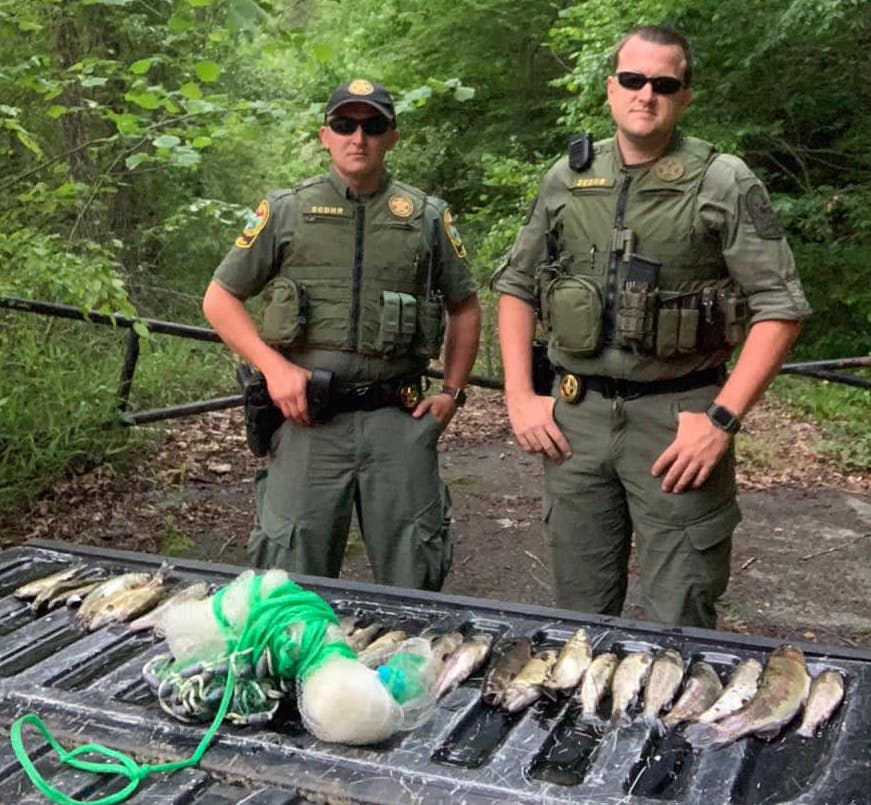 A trout angler (we use the term loosely) was catching trout with a cast net in the South Saluda river last week. While making his way back to the parking area, SCDNR officers stopped and questioned him. Here’s how it went down, according to the South Carolina Game Wardens Facebook post:

“On the afternoon of May 14, 2022, Region 1 officer LCpl Tatum and CO Thomas were on routine patrol in Greenville County. Vehicles were located in the area of the South Saluda River near Wildcat Wayside at a DNR fishing access and stocking point. One individual was observed carrying a large cooler back toward his vehicle.

During initial contact with the subject he claimed there were only drinks in the cooler and no fish. Upon further investigation the cooler revealed an illegal cast net and 2 grocery bags which contained 29 trout. The individual admitted to using the cast net to catch the fish and further investigation revealed he also had not purchased a freshwater fishing license. Charges pending court include fishing without a license, using a non-game device to obtain freshwater game fish(Cast Net), and over the limit trout (x24).”

If you see illegal activity taking place while you’re hunting or fishing, report it to Operation Game Thief.

Hector Elizondo and his dad caught a nice stringer of bream while fishing a pond in Joanna, S.C. in June 2022. […]

The SCDNR, USDA, and Clemson Extension are aware of a mass die-off of wild vultures in Charleston County, S.C., some from avian flu. […]

Lake Hartwell’s striper bite can get tough during the summer, but this big spoon technique works like a charm on the upstate lake. […]