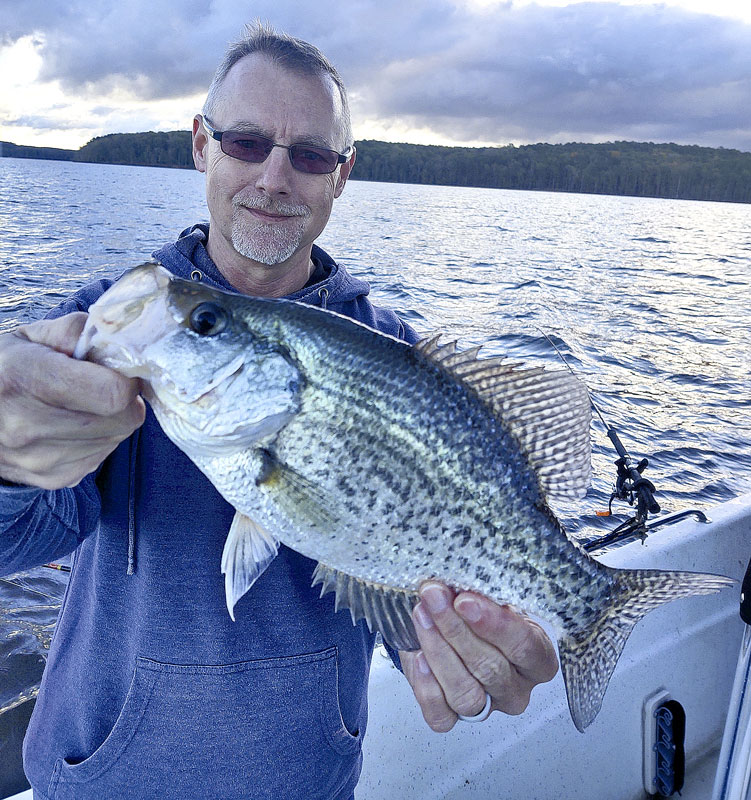 What’s the most wonderful time of the year?

For crappie fishermen at North Carolina’s Jordan Lake, December is not about the fabled migration of the jolly fat man, but the jolly fat crappie. This time of year, these fish filter towards the lake’s main-river channel, where they feast on the shad leading the way.

Guide Greg Griffin of Apex, N.C, will be there with a sack full of minnows to deliver to all the good little girls and boys.

“December is the beginning of the best time to catch big numbers of crappie,” said Griffin (919-434-4183), who runs Greggofish Guide Service. “They’re settling into their winter pattern that usually lasts until the first of March. You don’t have to finesse the fish this time of year. Just get the bait down to them.”

Griffin said Jordan crappie are generally caught in 18 to 28 feet of water, with the sweet spot typically 22 to 24 feet. He isn’t looking for fish in the channel itself, but rather the edges that rise into the desired depth. In those areas, he may find a baitfish concentration on his sonar. But he’s really looking for the crappie themselves, scattered on the bottom.

Live minnows are good, jigging lures can also be productive

He begins in early December scanning both ends of the lake — the Haw River side or the Farrington Point end — where he believes the fish turn the earliest. Then, he focuses on the mid-lake area as the month progresses and fish meet in the middle.

“I’m using live minnows most of the time on a single-dropper rig. But you could use a Carolina rig,” said Griffin. “I tie it on 15-pound braid with a 20-pound fluorocarbon leader. The hook should be tied on with a loop knot. That allows the minnow to swim more freely about 20 inches above a 3/8-ounce bell sinker. I also like to vertical-jig a Jack Slap from Catch Outdoors when the fishing is good. It’s a tail-spinner made out of tungsten.

“The fish are constantly roaming, looking for bait. If you’re not marking crappie, but seeing an area with a lot of life, you can sit on it and wait for them to come to you. But, I don’t exactly sit still. I’ll bump the boat around a little to cover the area.”

“I prefer to find fish on the bottom, because the bait placement is easier. But if I’m fishing an area like the (US 64) bridge in 35 feet of water, the fish will suspend, and it’s a more precise matter of placing the bait just above them.”

Striper season reopens at Santee Oct. 1, but that’s not the only species biting this month. […]

Falling for crappie on Joran Lake

As October’s weather cools down Jordan Lake, the crappie bite heats up. […]

About Dusty Wilson 273 Articles
Dusty Wilson of Raleigh, N.C., is a lifelong outdoorsman. He is the manager of Tarheel Nursery in Angier and can be followed on his blog at InsideNCFishing.com.

Deer hunting with an airgun — is it legal?