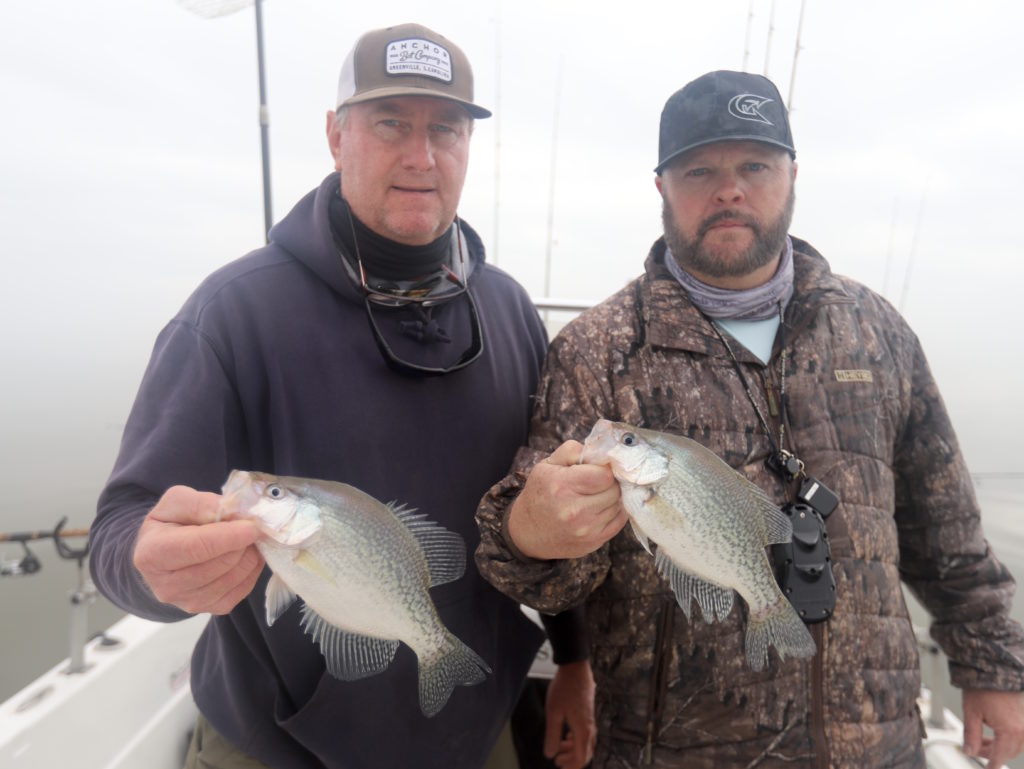 Anglers fishing for crappie are having plenty of luck throughout the Carolinas, despite lots of nasty weather in both states. Most anglers are catching their share in deep water on brush piles. They say high water levels haven’t impacted the bite.

“Deep” is a relative term, depending on the maximum depth of the waters you’re fishing. But brush piles in 25-foot depths are good places to start for waters that are deeper than that. Lake Wylie, Jordan Lake, Murray, Tillery, and the Santee Cooper lakes are all giving up crappie in that depth range and even deeper. Recent rains, however, have kept anglers off the lakes on many days.

Capt. Joe Dennis of Captain J Hook Charters said the cold and high water isn’t a problem at lakes like Santee. But he said the crappie are biting much more consistently during bluebird sky days.

“I don’t like crappie fishing when it’s very cloudy or foggy. The crappie scatter under those conditions. They feel more comfortable venturing away from the cover because the predator fish have a harder time targeting them. So they aren’t concentrated on the brush piles. But on bright, bluebird sky days, they hold tight to cover and are much easier to find,” said Dennis.

Crappie of all sizes are biting

Finding them doesn’t always equate to catching them though. Dennis said this time of year, anglers should be prepared with many different colors of jigs, as well as live minnows. Try a variety until the fish begin showing you what they like that particular day.

“And don’t waste time if you aren’t getting bit. You want to give them 10 or 15 minutes and if you’re not catching some or at least getting some solid bites, it’s time to find another brush pile,” he said.

It can be tough leaving an area that you know has a heavy concentration of fish. But Dennis said you’ll find more on other brush piles. And hopefully those will be more willing to bite.

“It’s always a good idea to check back on the unproductive ones later in the day. Sometimes they just turn on at different times,” he said.

Dennis said the crappie are so thick in some spots that anglers need to wade through a lot of smaller ones to get to the keepers. But he said this is also an excellent time of year to catch some really big slabs.

“You’ll catch them in a range of sizes right now, but this is one of the best times of the year to catch your biggest crappie,” he said.

How to gain land access to hunt hogs and coyotes

Finding access to hunting land can be a challenge for coyote and hog hunters, but with these tips, you’ll find and keep access from landowners who are happy to have your help. […]

Fishing on the Santee Cooper lakes explodes in March

Santee Cooper is a shallow-water fishing paradise, and it’s tough to beat the skinny water action of March. Multiple species of fish are in spawning mode, with stripers, largemouth bass and crappie in their annual reproductive rituals. […]

Coyotes are breeding, making this a great time to hunt

January through March is coyote breeding season, and you’ll increase your numbers by calling and being patient this time of year. […]