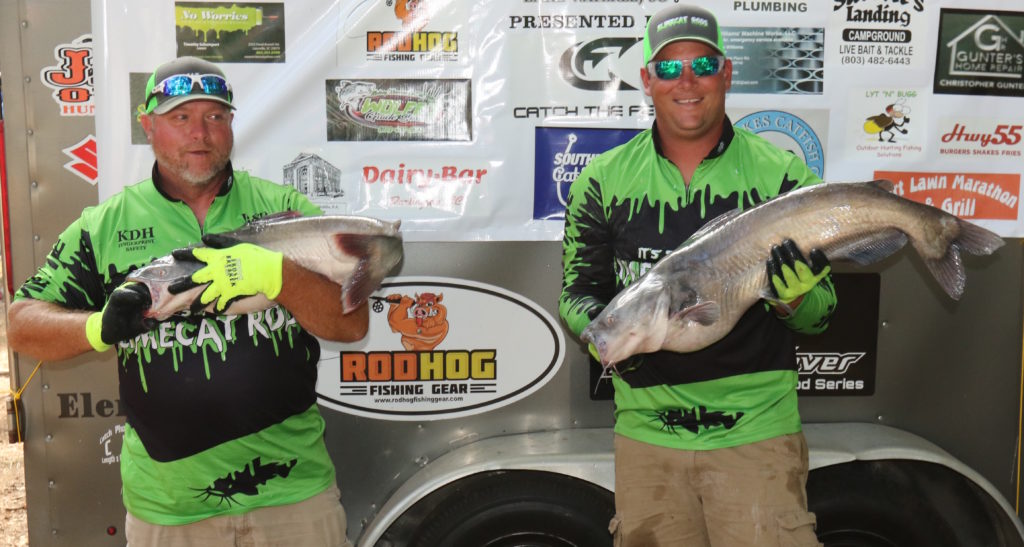 David Stanley of Madison, N.C. and Danny Ball of Greeneville, TN teamed up to win $10,000 this past weekend at the Southeast Big Money Showdown on Lake Wateree. With a total weight of 152.25 pounds during the 2-day event, they had almost 10 pounds more than the second-place team.

Stanley and Ball were leading after Day 1 with 99.05 pounds, which included a 31.75-pound cat. They racked up 53.2 pounds on the second day, staving off a strong comeback run from Team Tool Man, which finished the tournament with 142.35 pounds, after weighing in 87.85 pounds on Day 2.

“We had a plan and we stuck to it,” said Stanley. “The first day was definitely better. Day two was very windy and it made it more difficult to fish the way we wanted to. We were power dragging. It worked out great on day one. We kept at it on the second day and it was a grind, but we got it done.”

17 teams tallied more than 100 pounds during the tournament

The event, held by Catch the Fever Rods, Jamie K Outdoors, Drifting Stix, and numerous other sponsors, had a 4-fish limit per day. Teams were allowed to weigh in any species of catfish. The vast majority to make it to the scales were blue cats. More than 100 teams fished in the event, with 96 teams weighing fish on the final day.

Team Tool Man, made up of Gray Brookshire, Andrew Coone, and Rick Helms, anchored their Day 2 total with a 33.5-pound fish. After catching 54.5 pounds on Day 1, their Day 2 total weight of 87.85 pounds made them one of 17 teams to put more than 100 pounds on the scales during the event, which was held Friday, Oct. 15 through Saturday, Oct. 16.

Team Cat Baby (Bill Sutton and Mac Moneta) took third place with 128.65 pounds. They had a very consistent showing, weighing 63.15 pounds on Day 1, followed by 65.5 pounds on the final day.

This was the tournament’s second year, and plans are underway for next year’s event. Click here to see the full results of this year’s tournament.

Dawson McCaskill had a big day of duck hunting near Camden, SC. […]