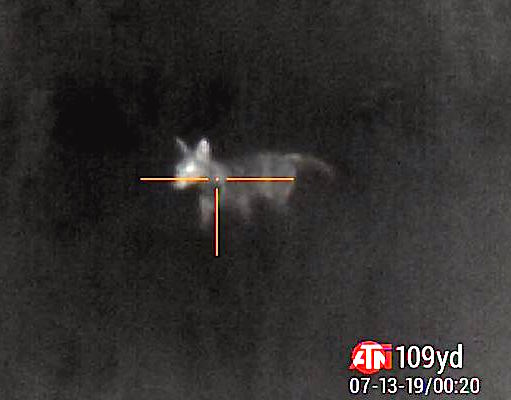 Summer population of coyotes is highest of the year

The peak number of coyotes in the outdoors is upon us right now. The young predators have left the den and are hitting hunting areas all across the Carolinas. And that makes this the easiest time for predator hunters to score on numbers of coyotes.

At this moment in both Carolinas, the predator population has peaked with the arrival of pups to their feeding areas. This spring’s litter of coyote pups has finally hit the fields to learn how to hunt on their own. That provides outdoorsmen with the opportunity at large numbers of naive predators.

Large litters will come to the call together, ensuring some of the fastest action of the year. After several months of female coyotes hiding the location of their dens by not responding to coyote calls, large numbers of howls can be heard starting in late July. These calls will continue until November.

Right now is a great time to grab those predator calls and head out for some fast action before deer season. Prey populations are also at their peak, so let’s sort through some of the best tactics for getting on coyotes in the summer months.

Every field right now is a buffet for young coyotes. Young-of-the-year birds, mice, rabbits and deer make up a lot of the coyote’s diet. Grasshoppers, crickets and the like are easy prey as their numbers are uncountably high.

Observations I’ve made through my night vision and thermal scopes show me that this time of year, young coyotes will hit the higher growth fields chasing large numbers of bugs. The summer brings about large infestations of insects that young coyotes can train on while searching for food.

Coyotes groups will bed close to these feeding areas and move in just after dark as the nights are the shortest they will be during the year. Look for fields that border woodlots where you have heard coyotes in the past.

Young prey calls are great this time of year. So keep a rotation on your caller. Mix several bird, rabbit, and rodent calls into your sequence. Start at a lower volume and work your way up. I also drop my volume when I spot a coyote to keep them looking for their prey. I keep a preset mouse or vole squeak handy to really drop that volume but keep them interested.

Hunters can also lip squeak to draw in a coyote the rest of the way. Just make a squeaking sound with your mouth, and most coyotes will investigate long enough for you to get a shot off.

Sounds of coyote puppies should also be preset on your caller remote this time of year. Pup howls, pup fights, and pup distress are all calls that will peak the interest of any coyote. I have multiples of each of these calls. But I use them on a rotation rather than use them all in a single set.

An unlimited number of pup sounds are on the market for hunters. Use a variety until you see what works best in your area. And rotate those calls each time out, especially when you harvest an animal. Mix prey distress with pups fighting, and you create a scenario of coyote puppies fighting over an easy meal.

After shooting, play pup distress calls to tray and draw in other coyotes looking to help their friend. Multiple harvests are pretty easy this time of year while coyote numbers are at their highest.

Check for cut fields in your area as this is your best choice with most day and night vision equipment. Cow pastures are another favorite of coyotes as the group of local predators are always looking in that area for an easy meal. Coyotes particularly like the waste from young calves, which are drinking a lot of milk from their mothers this time of year.

Cattle watering holes are another hot spot during the hot summer months. Coyotes use these watering areas nightly as they search for water. So these areas can be key in locating coyotes for your hunt.

Thermal hunting equipment is best this time of year with the vegetation growth. So spotting coyotes feeding is much easier using thermal equipment. Watch wind direction and move in on vocal coyotes, using calls mentioned above.

Daytime calling can pay off also, but move into the wood-line more. Young coyotes often rush to the call in thick vegetation, so the action can be fast.

The best time for the largest numbers of coyotes is right now. And hunters can take advantage long before other sportsmen are thinking about hitting the woods. Follow these steps right now and you’ll up the odds on your predator hunting throughout the summer and into the fall.

Click here to get more tips on hunting predators.

Mahi mahi a/k/a dolphinfish are plentiful and popular among anglers Mahi mahi (Coryphaena hippurus) are some of the most colorful fish in the sea. Their long, slender bodies are brightly colored in blue, green and […]

First-aid additions for your fishing bag

Pack a couple of ACE bandages for first aid in your tackle bag, and you’ll be ready for many emergencies without taking up much space. […]

New law requires some boaters to use kill switch

The USCG, SCDNR, and NCWRC are reminding operators of boats less than 26 feet in length of a new nationwide kill switch law. […]

Crossing a bridge over a southern reservoir on a summer night can treat you to a light show that really makes you want to wet a line. […]