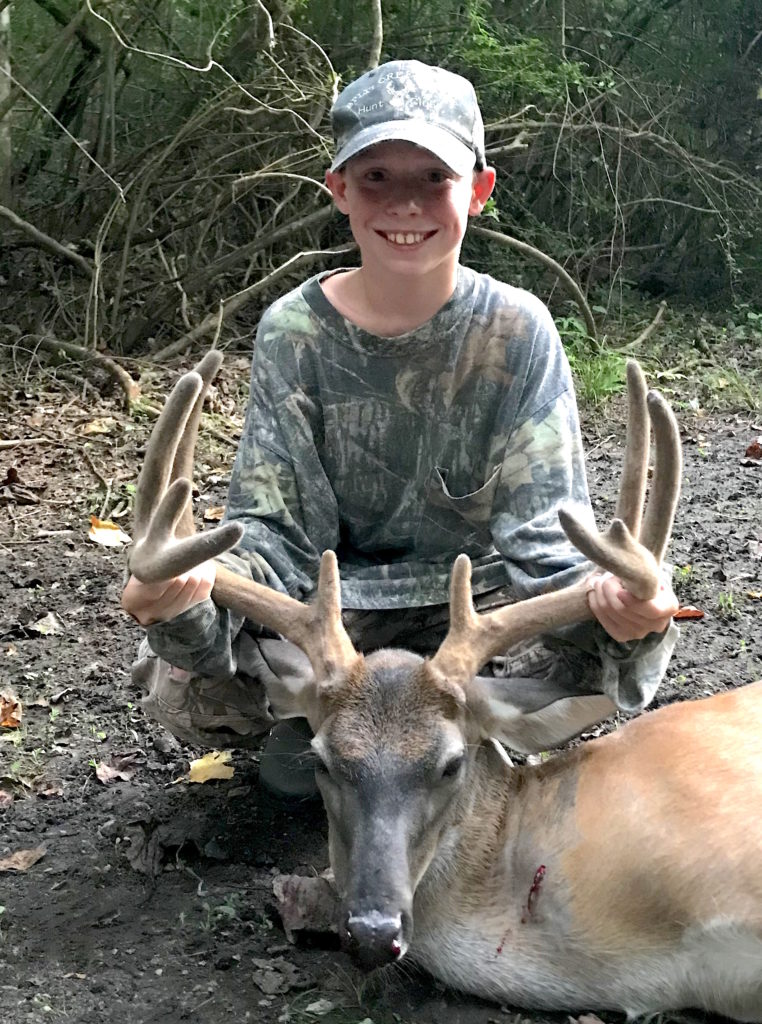 Although he was happy for his brother that morning, it made Hunter want to get his own buck that much more. So he convinced his dad to stick around the Orangeburg County property for an evening hunt.

Tanner’s morning harvest came out of what the family calls the Tree House stand. And that’s where Hunter decided he wanted to go that evening. So at 6 p.m., that’s where they headed.

“His brother had dropped his first 8-point that morning, so we called it a morning and headed for the processor. It didn’t take long for Hunter to convince me to stick around for the evening hunt,” said James Peeples, the young hunter’s dad.

Once in the stand, Hunter decided to set up his GoPro camera, hoping to get some good action on video. After an hour without any action, the young hunter started to get impatient.

Buck showed up out of the blue

“About an hour went by, and Hunter started to get a little antsy. He couldn’t keep still,” he said.

But the slow action shifted quickly when a deer arrived with no warning.

“Out of nowhere, a deer stepped out of the wood line about 80 yards out. I can tell it is a shooter. I bumped Hunter and whispered ‘deer…buck…shoot,’” he said.

Hunter got himself ready, and his dad was worried the deer would disappear before the young hunter could get a shot off.

“It took a little bit for him to situate himself in a shooting position. I feared the deer was going to get spooked and run. But he steadied himself with my .30-06 and BOOM! the buck folded up and never moved,” he said.

“I will never forget Hunter, excited and adrenaline rushing, say ‘it looks like an elk!’” said his dad.

The 10-point buck was in full velvet and had a 19-inch spread.

Coupled with Hunter’s brother’s hunt from that morning, James Peeples said it was a very proud day for a dad, a Paw Paw, and the two boys. That will be a tough one to beat for years to come, he said.

Like his brother, Hunter is now entered in our Bag-A-Buck contest. Click here to enter your buck in the Carolina Sportsman Bag-A-Buck contest. We’re giving away some great monthly prizes, as well as a Grand Prize that includes a Millennium M25 hang-on deer stand and a 2-man, 2-day hunt for deer and hogs at Cherokee Run Hunting Lodge in Chesterfield, S.C.

Christopher Thomas of Georgetown, S.C. killed a 13-point buck on Oct. 17 during an afternoon hunt in Georgetown County. […]

Ducks on the state’s dime. Where is the Carolinas’ top public waterfowl hunting?