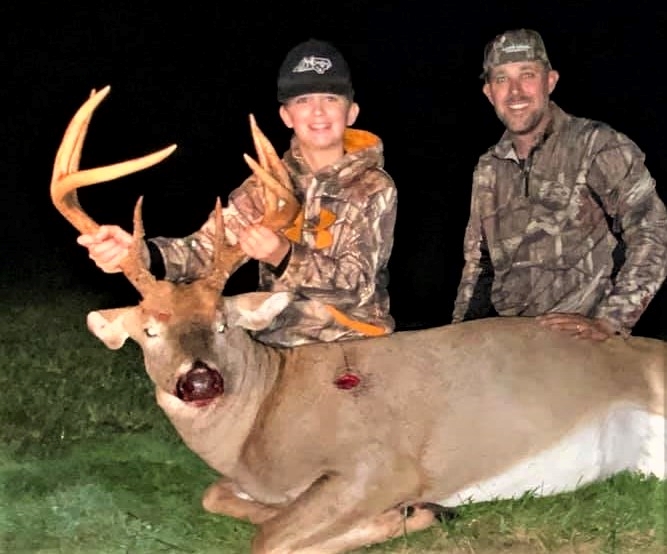 Jonah Adams, a 13-year-old crossbow hunter from Toast, N.C., killed a Surry County 8-point buck that weighed 215 pounds on Oct. 5. The deer has been green-scored at 140 inches. The typical 4×4 rack was made up of long tines and lots of mass.

The young hunter was in a ground blind with his dad, Matt Adams when the big deer showed up. He killed it with a Barnett Raptor FX crossbow. Although he had killed “five or six” deer before this one, the Surry County 8-point buck is his biggest.

It wasn’t their first look at the buck, but it was the first time it was in range.

“We saw the deer opening day of archery season, but he was too far out in a bean field for a shot,” he said. “We had trail camera pictures and videos at different places, including three days he was at one scrape. But none were in daylight.”

Around 5:30 p.m., the two hunters eased into the woods. An hour later, a doe slipped behind them and began snorting.

“She blew up the woods. So we figured the evening (hunt) was over,” the elder Adams said. “We sat for 20 minutes. Then a spike walked the same trail, and the big buck was right behind it. They didn’t smell us.”

The appearance of the large 8-pointer at 6:45 p.m. surprised the young hunter.

“The first time he came in, I was about to shoot. But he turned and faced us for 10 minutes and didn’t give me a chance,” the young hunter said. “He was 32 yards from us. My scope’s first line was set at 20 yards, and the second at 34 yards. So I aimed just below his back and behind the shoulder.”

Finally, the buck turned and offered a quartering shot.

His dad told him to a take a shot if it had it. The young hunter aimed for the heart and pulled the trigger. The bolt, tipped with a NAP Killzone two-blade expandable broadhead, hit the deer a little high. It deflected off a rib and lodged in the opposite shoulder.

“He squatted, then took off,” Jonah said. “He ran into the bean field, down the field’s side and fell at the edge.

“There wasn’t a lot of blood because the bolt didn’t go through. We followed spots of blood and tracks for 100 yards. Then we saw soybean (plants) mashed down and dad spotted his belly 10 or 15 yards farther at the field’s edge.”

A neighboring farmer with a John Deere tractor and front-end loader drove to the field and scooped the deer into its bucket for transport.

They are pleased they didn’t harvest the Surry County 8-point buck during the 2019 season.

Congratulations to Adams, who is now entered in our Bag-A-Buck contest, making him eligible for a number of great prizes, including the grand prize which includes a 2-day, two-man hunt at Cherokee Run Hunting Lodge. Click here to view the Bag-A-Buck gallery or to enter the contest yourself.

Chad Gaines of Siler City, N.C. killed two October giants, making his case as one of the state’s top archery hunters of 2021. […]

The 3rd time was the charm for this hunter. […]

NRhone Bag a Buck, Deer of the Year