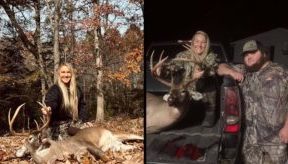 I have turkey hunted since I was 6-years-old, but I’m just in my 2nd year of deer hunting.I never dreamed that I would tag out on bucks this season, much less on two big deer that gross scored 138 and 132 inches. The first one I took on Sept. 25 with my Carbon Express crossbow at 18 yards in a clover food plot. I was hunting with my fiance’ in a two-man ladder stand.

We had named the buck “Ringo” from the trail cam pictures we had of him during the summer when he was with a bachelor group of 9 different size bucks. His main beams almost touched together to form a ring is where we came up with the name.

I connected on my second deer of the season on Nov. 20, the opening day of gun season in my home county of Stokes. It was a buck which my dad had trail cam pics of for 4 years which at the time was a 6 pointer.

We had named the buck “Tank” because of the 30-inch neck he had all the years we had pics of him. Even in early bow season his neck was that big as if he was in rut. “Tank” was almost nocturnal because we didn’t have but a couple of early morning daytime pics of him the whole time our cameras were in operation. He was following a doe when I dropped him with my 6.5 Creedmoor at 125 yards coming out of a bedding area. The buck weighed 205 pounds and had 9 points.

Coyote with a fawn in its mouth