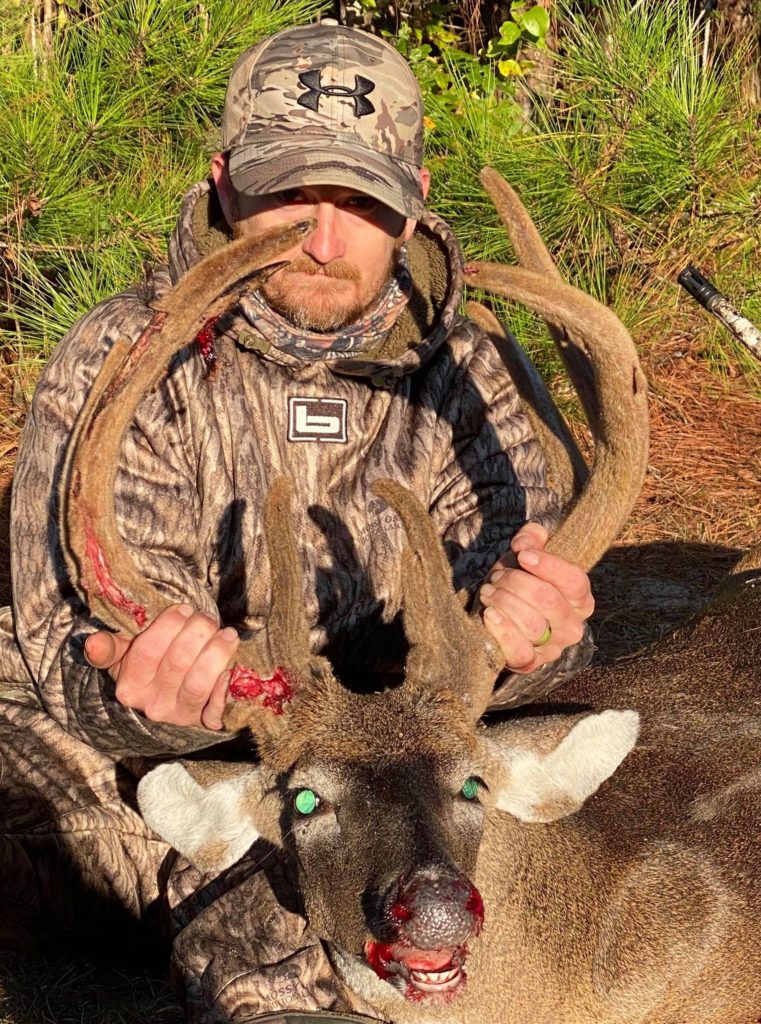 Well I guess this is my story. I hunt in Lee County, S.C. It all started when I set my trail cameras out during the summer of 2019. Just like all the years before of setting up a camera, hoping to catch a big one moving through.

Early in the season, I finally got some pictures of the buck soon to be known as Bruce. I commented that it was a nice buck. And as the year went on, I finally realized this is a special buck.

I noticed in late September he still had his velvet. Then in October, he still had it. So I knew this was a deer I really needed to get as it was more than just a trophy buck. Something else was going on. So 2019 went by and I never saw the deer in the flesh. And I never got a daylight photo of him all season. It was always early in the morning or late night.

The buck was a loner

In all photos, the buck was always by himself. So I guess does were scared of him, thinking he was a buck. And maybe the bucks in the area were scared because they thought he was the mature buck. I also noticed he never went into rut. So I never could us any rut-hunting tactics on him.

Then came 2020 and here I go, doing my normal preseason activities — planting and putting corn and cameras out. And what did I see? Bruce again some time in late September.

He showed up and once again the hunt for him began. I always thought and told people I was only gonna kill this deer in the “hallway” if you’d call it that. It was the area between the kitchen (his corn pile) and the bedroom (his bedding area). I hunted all over my property this year, letting deer after deer walk, just hoping to get a chance at seeing this 14-point buck.

At this point in my hunting experience, I’d never killed a deer worth mounting before. So to kill him would be the ultimate first Big Buck for me. And on the morning of the Best Hunting Day of my Life, Oct. 24, 2021, I pulled up to my place already having in my mind where I wanted to sit. I pulled into my property and parked. My phone went off with a photo of him at one of my other stands, showing him eating.

So there I stood at my truck wrecking my brain over where I’m going to sit and I finally realize just go with your gut and not that camera pic. So I did. And I sat the stand I was already planning to before I got the pic of him. The stand has a huge white oak tree down from it with a food plot along the road behind you and bedding all around it.

So I got in the stand some time after 6 a.m. still getting pictures of him at my other stand. So I ready didn’t expect to see him that morning. Daylight came and I’m just sitting there waiting on some kind of movement. It was a beautiful morning that morning. Crisp morning, no clouds, birds chirping. I was hoping like every other hunter that wakes up early on their only day off just to go and kill the buck you been chasing and watching for two years.

When 8 a.m. rolled around I heard a limb break or something behind me up the road I walk in on. And there he was. Well at that time I wasn’t completely sure it was him. I just knew it was a giant. So I had to get turned around in my stand to be able to get a shot. And he’s already standing in the road. It all happened so quick I was never able to know for sure it was him.

He immediately buckled in the front end and then ran into the bedding area across from him only noticing to hear a crash about 50 yards or so from me in the stand. So I gave him some time as I called everyone I knew to let them know that I thought I got him.

I had a buddy hunting with me that morning and he came and gave me a hand and after tracking him all of 5 minutes we found him 20 yards from where I had shot him. So my saying had come true as to saying I would kill him in the hallway because I had killed him in between his corn and his bed.

He was dead an on my 4-wheeler. Finally I had killed a monster buck and it was Bruce, a 14-point buck that was still in full velvet and it was almost November. He had damage to his genitalia that is why he still had his velvet.

He weighed 183 pounds and was the biggest deer I had ever killed or seen and I’m 37 and been hunting since I was 13.