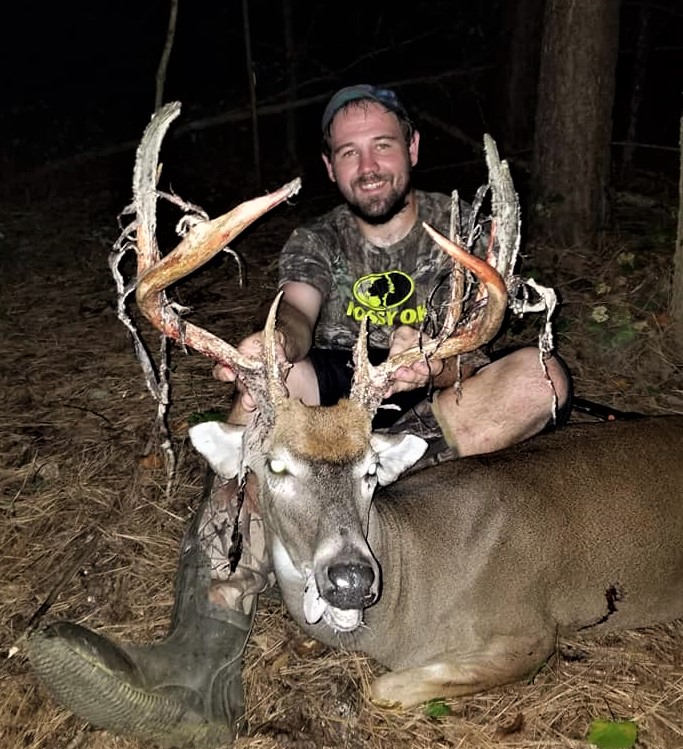 Zack Porterfield of Roxboro, N.C. added another trophy whitetail to his collection Sept. 13 when he killed a Granville County 9-point buck. He shot the 5×4 with a compound bow.

The buck had 10 points total, but one was just shy of being scoreable.

“It was a 10-pointer and would have totaled 150 inches. But his rack didn’t get full growth on a point on the left (main) beam,” he said.

Still, the antlers measured 145 inches. He killed the buck almost one year after he shot his 2020 trophy, an 8-point buck that measured 150 3/8 inches.

Porterfield was sitting in a 4×8 wooden box blind that was cobbled together with plywood sides and brushy limbs on top.

“It had openings on three sides I could shoot through while sitting,” he said.

He placed the blind in a 6-year-old, 100-acre cutover that had been replanted in pines. He lured the buck in with shelled corn.

“This deer came to shell corn for two months at the same time almost every evening,” Porterfield said. “Just before the season, he showed up 7 days in a row from 7:20 to 7:30 p.m. So I thought I’d get a shot opening day. I’d put a bag of corn out Friday morning (before his initial hunt).”

The buck had other plans

However, the 9-point buck had other ideas for opening day. It disappeared once the green flag dropped on hunting season.

The large-racked buck also didn’t appear the next day, Sunday, even though his traveling companion visited the corn. Porterfield’s trail camera also didn’t have images of the big buck Saturday or Sunday. This triggered some concern.

“The land I hunt, a farm that didn’t have any crops, wasn’t supposed to have anyone else there,” he said. “But I think (other hunters) are everywhere. I didn’t know if he’d been spooked or shot.”

The anxiety made Porterfield contact local whitetail guru Scotty Morris. Morris reassured Porterfield that the deer would be back.

“He’s on a rut walk,” Morris told him. “He’ll come back the third day because he’s shedding velvet.”

Porterfield had never heard that term before. But he trusted Morris’s experience. His worry level dropped, and he decided to sit in his blind Monday evening.

He arrowed the buck at 15 yards

“But I didn’t feel real good (about seeing the buck) when I got there,” he said.

However, at 7 p.m., three small bucks appeared. And at 7:20, the missing deer walked to the bait pile.

“He had velvet hanging down his antlers,” Porterfield said. “But he didn’t eat corn. He just stood and looked at the blind and me for 5 minutes.”

Finally, the shaggy-racked whitetail turned broadside. The hunter wasted no time putting his Elite bow’s sight pin behind the deer’s shoulder and released a Blackout arrow tipped with an eight-blade Crown Thorn broadhead.

“He was 15 yards from me,” he said. “It was a pass-through shot that hit both lungs and clipped the liver.”

The deer ran about 100 yards and out of sight into some hardwoods. When Porterfield left his stand and searched, he couldn’t find his arrow or see the buck. He called Morris again. They found the arrow, then the buck after a 10-minute search.

The buck weighed about 160 pounds and appeared to be 3- or 4-years-old.

Congratulations to Porterfield, who is now entered in our Bag-A-Buck contest. Click here to enter your buck in the Carolina Sportsman Bag-A-Buck contest. We’re giving away some great monthly prizes, as well as a Grand Prize that includes a Millennium M25 hang-on deer stand and a 2-man, 2-day hunt for deer and hogs at Cherokee Run Hunting Lodge in Chesterfield, S.C.