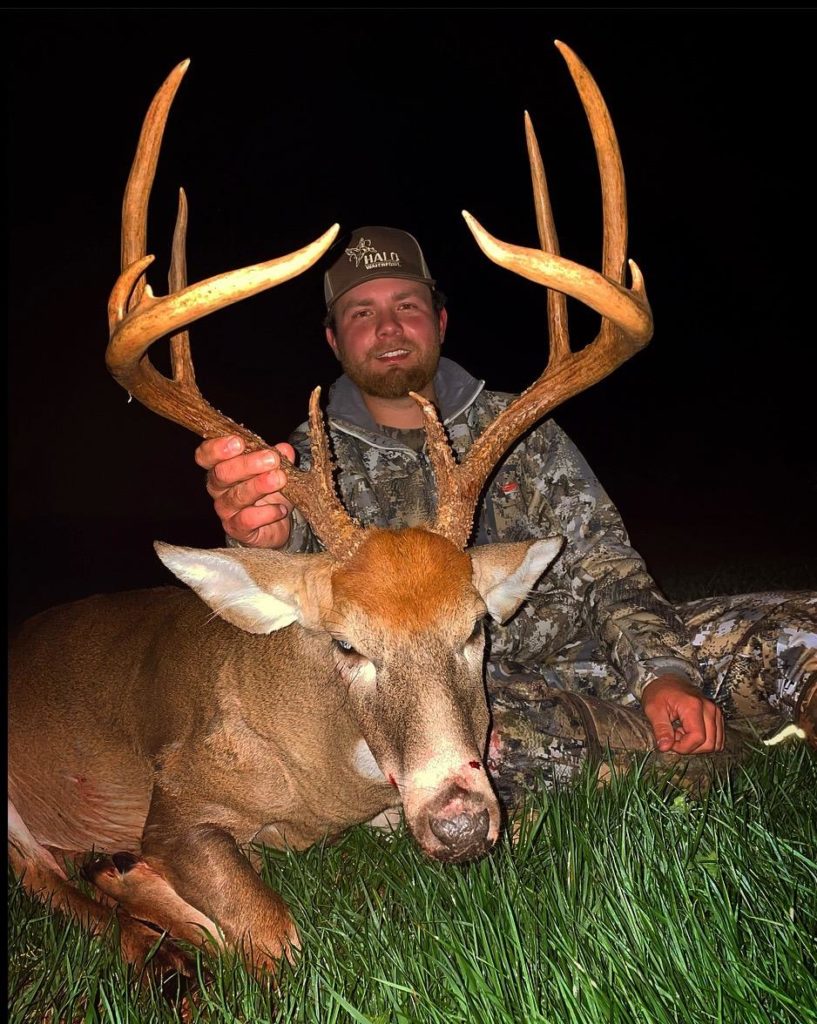 Ryan Long of Greensboro, N.C. has killed his share of trophy bucks over the years, and he killed the biggest-bodied deer of his life on Oct. 30. The 10-point buck weighed well more than 200 pounds and has been green-scored at 141 2/8 inches.

Long killed the big 10-point buck in Rockingham County during a muzzleloader hunt with a Knight MK 85. Unlike the other bucks he’s killed, he had no history with this one. He killed it within two weeks of seeing it on trail camera for the first time.

“This deer surprised me. I had no history with him, and he was the biggest-bodied deer by far that I’ve ever killed. I knew it was an older deer and I went back through trail cam photos of previous years, and I couldn’t see where he’d ever been on the property before,” said Long.

After that first trail cam sighting, Long hunted the buck as hard as he could, mainly on two different parts of his hunting property. The deer stayed around, but remained elusive.

“I had my Tactacam Reveals telling me what was going on. And it seemed like every time I was at one stand, he was at the other,” he said.

On the 30th, one of Long’s cameras alerted his cell phone. The big 10-point buck was at one of his stands at 4 a.m. That made it an easy decision as to where he would hunt that day, and he arrived just before daybreak.

All day hunt for trophy pays off

I went to that stand and hunted that morning but didn’t do any good. I saw 12 or 13 does and I just knew for sure he’d show up to check one of them. But he didn’t,” he said.

“From 1 o’clock to 2, does came out and fed around, but still no sign of him. I saw deer all evening, but not him. I sat there until it was just about dark when I saw a pretty nice deer — an 8-pointer. He was a good 3-year-old deer and I just watched him. It wasn’t quite good enough for me to shoot,” he said.

With daylight dwindling, he began gathering his stuff, preparing to leave the stand.

“I looked up toward the end of the field and I noticed a doe come out. I had already put my binoculars up, so I was using my scope to see what it was. And then he came out,” he said.

Just then, the doe, which was already about 170 yards away, turned to walk away from Long.

“That’s longer than I like to shoot with my blackpowder gun. And I just knew the buck would follow her,” he said.

Surprisingly, the big buck ignored the doe and walked straight toward Long’s stand.

“He was coming right to my corn pile. I don’t know if he was checking for other does or what, but he came straight in. When he got within 60 yards, I squeezed the trigger,” said Long.

Then the deer surprised him again. It ran toward Long and stopped, showing no reaction to Long’s shot. As the hunter fumbled around trying to reload, the deer took two hops and disappeared into the woods.

“I just knew I blew my chance. I called my granddad and told him I missed the deer. He told me I needed to check for blood to be sure. So we went down there and checked. And I would have never guessed it, but we found blood — and good blood at that,” he said. “And sure enough, he was laying about 30 yards in the woods.”

At that point, Long realized just how big the deer’s body was.

“His body was so big that it made his horns look small. And I thought to myself ‘this deer’s antlers aren’t as big as I thought,’” he said.

But they were plenty big. The deer’s main beams measured 25 inches, and the bases were 4 1/2 inches. The gross green score was 141 2/8 inches. Long and his friend’s estimated the deer to be at least 5 1/2-years-old.

Congratulations to Long, who is now entered in our Bag-A-Buck contest. Click here to enter your buck in the Carolina Sportsman Bag-A-Buck contest. We’re giving away some great monthly prizes, as well as a Grand Prize that includes a Millennium M25 hang-on deer stand and a 2-man, 2-day hunt for deer and hogs at Cherokee Run Hunting Lodge in Chesterfield, S.C.

About Brian Cope 2088 Articles
Brian Cope is the editor of CarolinaSportsman.com. He has won numerous awards for his writing, photography, and videography. He is a retired Air Force combat communications technician, and has a B.A. in English Literature from the University of South Carolina. You can reach him at brianc@sportsmannetwork.com.
Website