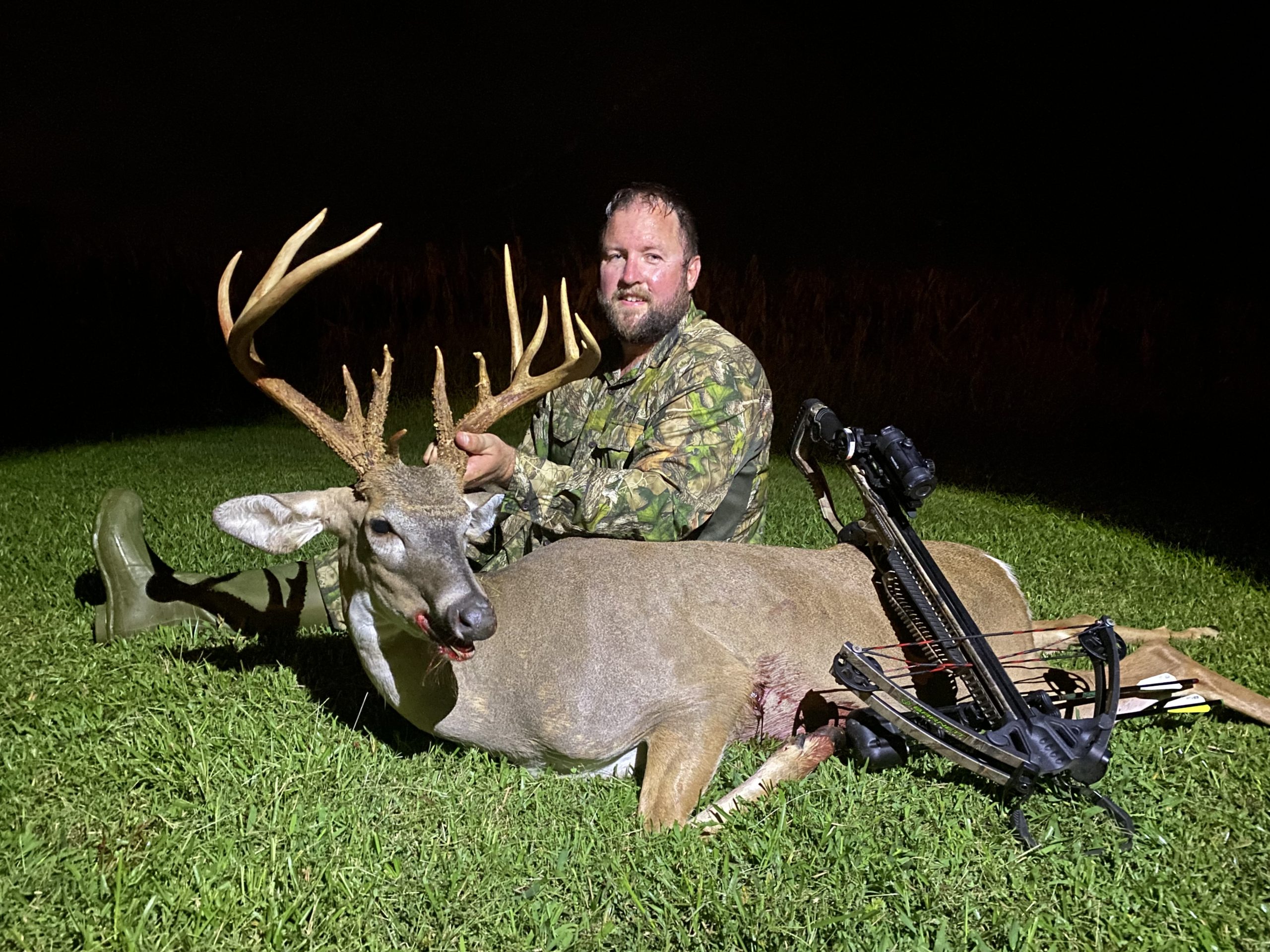 I first got this buck on camera in May. I was able to tell he would be something special because he had what appeared to be a third brow tine. I never got another photo until early August and then he showed up 3 times in daylight with a bachelor group on the first day. His most impressive feature was a long point that came from the base of his left G2. It reminded me of a sucker on a tomato plant, so I started calling him “Sucker.”

He would appear on camera regularly and seemed comfortable with the standing corn. It is the first time I remember corn growing on that farm and it made a big difference in deer activity. I was afraid something may happen to him with a busy highway so close by, especially when the rut came, so I planned to hunt him early season from a stand that a group of us fabricated from a hammer mill and an oil drum, but it would have to be on days with a south wind, no exceptions.

Based on the farmer’s timing to harvest the corn, I knew I only had a week to hunt him during archery season. Since I could not draw a bow inside the oil drum stand, I knew I would have to use my crossbow I keep for my kids to hunt with. It wasn’t hard to make peace with that idea. After the archery opener, I returned home from a bow hunting trip in Georgia with an old army buddy.

My first hunt, I approached the stand from downwind and sat for a few hours, only to see 5 does and a small buck. I left at dark and an hour later I get a cell cam photo of him at my stand. The following evening, Sept. 12, would also provide an appropriate wind. I settled in with the crossbow and within minutes I was seeing deer at 30 yards. This time with plenty of daylight left, Sucker steps out of the woods along with 2 other bucks 47 yards away and comes straight toward me and starts to feed at at the edge of the standing corn 25 yards from me. It took nearly 5 minutes for him to turn enough for a good broadside shot.

In the words of John “Hannibal” Smith, “I LOVE IT WHEN A PLAN COMES TOGETHER.” As pleased as I am to have put a plan together that worked out so well, all the glory goes to God. I couldn’t have done it without him. Even if I could, I wouldn’t have wanted to.

Congratulations to Revels, who is now entered in our Bag-A-Buck Contest and in the running for these monthly prizes and the Grand Prize package:

Coty Ingraham of Newland, N.C. downed an Avery County monster buck on Sept. 11, 2022, a day after his wife killed her own trophy buck. […]