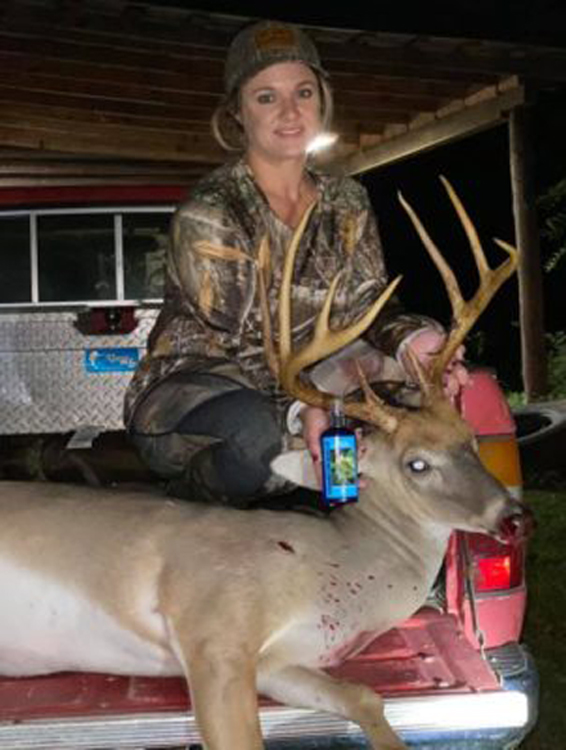 10-point buck was only deer she was targeting

Laura Tucker of Manson, N.C., only had one whitetail on her hit-list when North Carolina’s deer season opened on Sept. 11. It was a 10-point buck.

She didn’t have to wait long.

The afternoon of the season’s opening day, Tucker arrowed the 10-pointer that had been a regular on trail cameras on her family’s farm in Warren County.

She entered Carolina Sportsman’s Bag-A-Buck contest two days later, and on Oct. 2, her entry was drawn as the winner of the first monthly contest.

Tucker, a 36-year-old caseworker for Warren County’s Department of Social Services, was hunting out of a ladder stand on the edge of a soybean field, waiting for a buck she had in trail-camera photos for several weeks. She had sprayed her boots with Hughes Outdoors’ Honeysuckle Scent Concealer.

“We had him in full velvet for a couple of weeks, and it wasn’t until two days before the season opened that he lost his velvet,” she said. “He was the only buck that I’d been seeing for a while.”

At around 7:15 the evening of Sept. 11, Tucker said the 10-point buck, which green-scored 138 inches and carried a 5×4 rack with one sticker point and a 16 1/2-inch inside spread, showed up on the other side of the bean field and worked its way slowly across.

Finally, the buck made it to Tucker’s side of the field. She raised her Killer Instinct crossbow and sent a bold tipped with a Rage broadhead cleanly through the buck’s vitals. It went only 50 yards before crashing to the ground.

Willow Pruitt killed her first buck with a 75-yard shot from her .243 rifle while hunting with her dad. […]

This Piebald/Calico Buck was shot in Wayne County by Jacob Harrison. […]