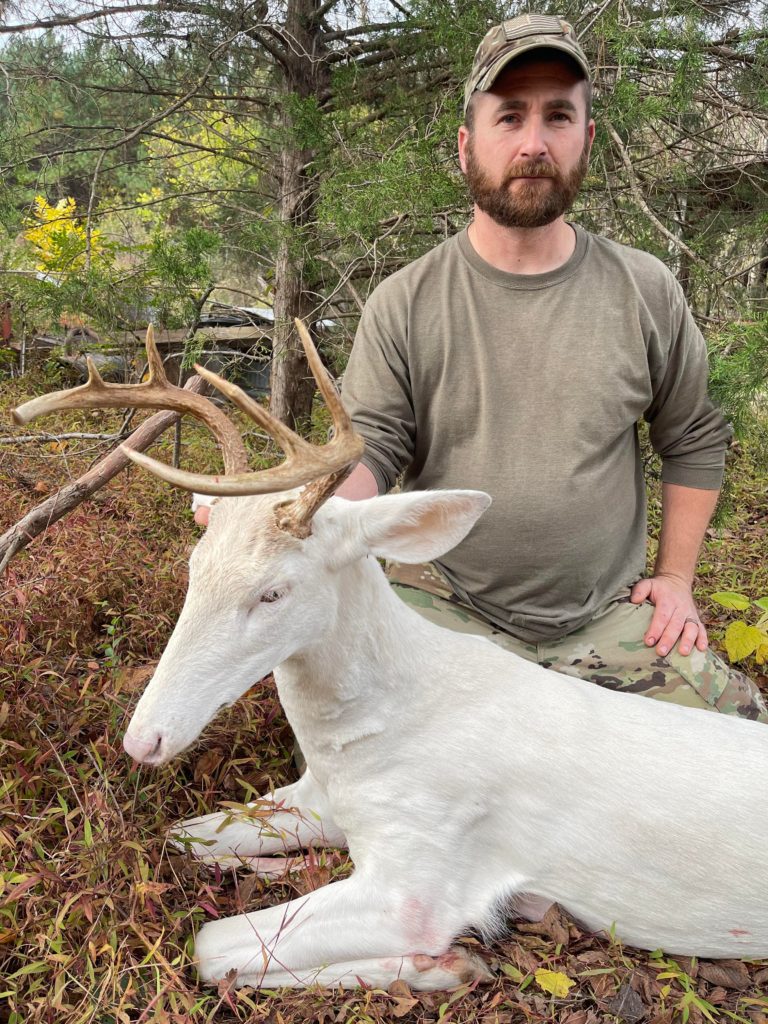 Randy Seay of Marion, NC killed a white buck in Orange County on Oct. 29, 2022 during a morning hunt. He’d never seen the 7-point buck in the flesh before, but he did have one trail cam photo of the deer, which was taken 2 weeks prior to the hunt.

The circumstances of the hunt weren’t ideal. Seay was sitting in his tower stand while folks on the neighboring property continuously beat and banged on metal roofing. The noise didn’t seem to bother the deer, which appeared at 8:27 a.m.

“I looked behind me and saw a white object moving, and I realized it was the deer that was on trail camera 2 weeks earlier,” he said.

The white buck was 20 yards away. Seay took aim and pulled the trigger on his Optima CVA Pro muzzleloader. He was sure he hit the deer, but the deer didn’t seem to think so.

“I hit it, but it stood there looking straight ahead. I reloaded and shot again. He didn’t go any further,” he said.

Aside from neighbors working on the metal roof, another occurrence almost prevented Seay from killing the deer.

“Another hunter was hunting 3 miles away a week earlier. He shot the same deer with a bow. But he only grazed him,” he said.

Congratulations to Seay, who is now entered in our Bag-A-Buck Contest and in the running for these monthly prizes and the Grand Prize package:

Addison Moran of Seagrove, NC killed an 8-point buck on Nov. 15 after a cat-and-mouse game with the deer on that rainy morning. […]