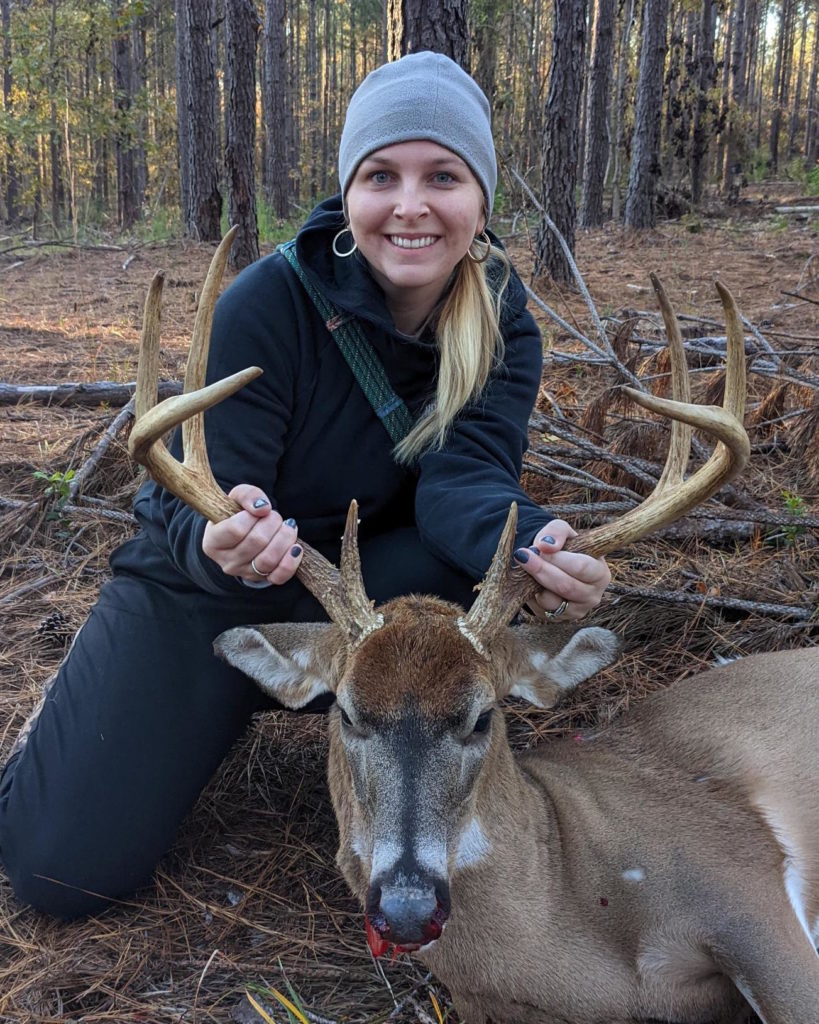 Emily Catoe shot the buck with a .270

Emily Catoe of Lugoff, S.C. killed a giant Kershaw County 8-point buck on the morning of Nov. 14, 2021, making it a date she will remember for a long time. It was a buck she’d observed through trail cam photos on numerous occasions.

“I recognized him immediately when I saw it,” Catoe said, referring to the many game camera pictures she and her husband had gotten of the deer. “We run a few cameras and have seen him on all the cameras. There wasn’t really a pattern to him.”

Catoe believed the buck was using their property as his home range and was living there, based on the number and frequency of trail camera photos.

The rut in this part of the state is on the downslide, but bucks are still cruising some and checking for does that may still be in estrus. Catoe thinks the giant 8-point buck was cruising and scent-checking her location when she spotted him making his way through the trees.

A cold front was pushing through that morning, getting deer moving more normal for this time of year.

“It was a little after 8 a.m. when I saw him moving through the timber,” she said. “When I saw him, I got so excited.”

“I got my gun ready and waited for him to stop where I could get a good shot on him,” she said. “He was about 110 yards away when I shot.”

Catoe pulled the trigger on her .270 Remington 700. Her shot was true and the buck fell in less than 20 yards. She wasted no time sharing the news.

“I immediately called my husband to tell him I shot the big buck,” she said.

Having taken many deer through the years, the excitement of seeing a buck like this never gets old. This is one of the largest mainframe 8-pointers killed in this area in a long time.

Being a wife, mom, and a registered nurse, Catoe doesn’t get the time in the woods as often as she’d like. But when she does, she cherishes it. She began her hunting career to be able to spend more time with her then boyfriend, but quickly fell in love with the sport. Now they both share it with their children as often as they can.

“It is just something I love to do, and I want to share it with my family,” she said.

Congratulations to Catoe, who is now entered in our Bag-A-Buck contest. Click here to enter your buck in the Carolina Sportsman Bag-A-Buck contest. We’re giving away some great monthly prizes, as well as a Grand Prize that includes a Millennium M25 hang-on deer stand and a 2-man, 2-day hunt for deer and hogs at Cherokee Run Hunting Lodge in Chesterfield, S.C.

David Thomas killed a blueberry patch buck in Yancey County on Nov. 16, 2021 after a doe led the buck into the hunter’s crosshairs. […]

Ethan Cox killed this Guilford County buck on Nov. 16, 2021 during an afternoon hunt. The entire hunt lasted less than 5 minutes. […]

About Pete Rogers 148 Articles
Pete Rogers of Taylors, S.C., is employed with the USDA Wildlife Services and has been a sporting writer and photographer for over a decade. He has a real passion for trapping and enjoys sharing his outdoors experiences with his wife and five children.